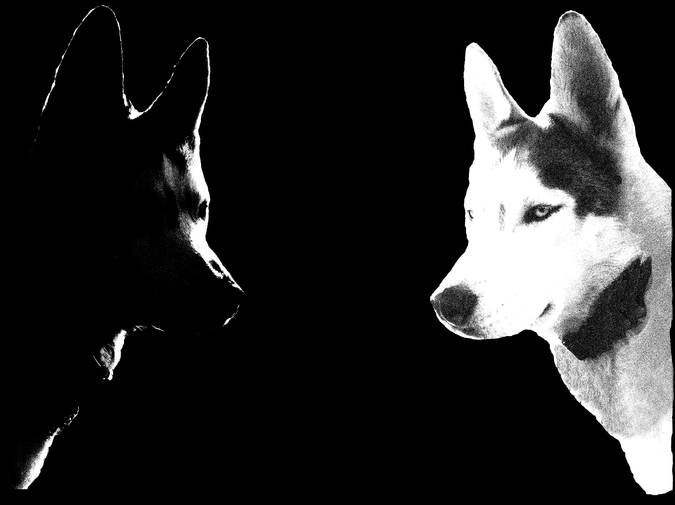 There are jars of herbs in 100-proof vodka on a shelf in the kitchen.

All the walls in the house are white.

There is a Siberian husky named Sascha on the couch in the living room by the window.

This is a shotgun house in Germantown. The city is Louisville.

Shotgun houses are on narrow lots. They are one-room wide and run three or four rooms deep.

There’s a black and white framed photo of John Lennon hanging over the dog on the couch.

There are blue and purple crystals on an end table in the living room. There are more crystals on the nightstand in the bedroom and on the black walnut dresser by the closet.

Mary says the ghost comes out of the closet at night. She says there were handprints on the ceiling one morning.

Mary says she and her ex saw the ghost one night and Sascha howled for an hour after it left. She says one morning she woke up and there was a blue outline of her body on her white bedsheet.

Sometimes I go into the closet when Mary isn’t home and say, “We should talk. I have some stories I could tell you.” But nothing ever happens.

I’ve just poured a cup of coffee and I’m walking back into the living room when Wes calls from LA. Sascha is still on the couch and I pet his white and black head before I take the call.

“Nothing. Sitting at Mary’s. She’s at work.”

“We’ll be in Chicago for a show next month. Small tour out here and then one show in Chicago at The Bottle. I’ll put you on the list if you want.”

“Sure. These days I can work whenever.”

“Fuck. I don’t know.” I sit back on the couch, take a drink of the coffee and stare out at the bright, hot day.

“Mary had a party here last night. Her friends are kids. There was pot all over the kitchen table, then this coke dealer showed up. Looked like he was eighteen.”

“The dentist? She into coke?”

“She says she doesn’t mess with it anymore.” Sascha raises his head and looks out the window, growls and moves the curtain over with his nose.

“Why she got a coke dealer at her party then?”

“Fuck, Wes. I don’t know. Because somebody wanted coke. She didn’t do any last night.”

“Her ex was here. He’s younger than her. Just this skinny kid. He’s fine. But why can’t I date women who don’t invite their exes to their lame-ass house parties? She’s a goddamn dentist.” It’s hot all of the sudden in the living room. I put the coffee on the table and walk back to the kitchen to pour a glass of water.

“You probably need a girl who doesn’t invite coke dealers to her house.”

“You can’t date this girl.”

“Twenty-eight. And because she’s gorgeous naked.” I fill the glass with water and drink it down and fill it again. “She was reading The Sound and the Fury when I met her.”

“She smells good and she’s nice to me,” I say, walking back to the front room.

“If I was there, I’d kick you in the side of the face. Does she Twitter while you two are at dinner?"

Sascha peeks around the corner at me from the hallway, then walks over to his food bowl and starts to eat.

“Never mind. Yeah. I’m sure she tweets while we’re at dinner. I’m going to start a fight with this husky and get him to chew my throat out.”

“No you won’t,” he says. “How many rehabs you been to? Three? Four? You’ve lived in trap houses for weeks in two different cities. You were beat and left for dead in Garfield Park. You’re thirty-five with a chronic drug problem and you’ve been sober for a year. You never think about shit.”

“I was sober before, but thanks for the history lesson,” I say.

“I don’t care what you’ve done. I’ve bought more drugs in countries where I didn’t know the language than you have ever seen. Stay with her, Ben. I get it. She’s a party girl with a large income who’s playing you with her ex. I’m not saying I would leave, but I would appreciate it if a friend gave me some sound advice when I was fucking up.”

“Doesn’t mean she isn’t fucking him.”

“You won’t think about it. Don’t lie to me. The show’s at the end of August. I’ll call you when we get the date.”

I drink another glass of water and study the herbs and vodka in the jars over the stove. They have labels, but I don’t read them. I go out back to the porch, but the heat is too much, so I head in and Sascha is standing in the kitchen looking at me like he wants to go out. I ignore him and go into the bedroom and unplug the lamp and carry it out. I grab my cup of coffee from the living room and Sascha is there at my side looking at me with his blue eyes.

“It’s too hot outside, boy. Want to go to the cellar?” I say, petting his side. His tail is wagging and he walks beside me to the back room of the house.

Downstairs it’s cool and smells of earth. I find a wooden chair and an extension cord to plug the lamp into. I light a cigarette, flick the lamp on and climb the stairs to where Sascha is sitting. I turn off the light and ask him to come. He stays there and whimpers as I shut the door.

Back downstairs I take a seat and look around at Mary’s things: a card table, five or six plastic boxes filled with clothes, some frames and a poster of her and her sorority sisters. I take a drink of the coffee, sit back and put my feet up on one of the plastic boxes. “You never talk to me,” I say toward the back of the cellar. “Mary says you live down here. I’m going to smoke some cigarettes. If you want to talk, I’m here.”