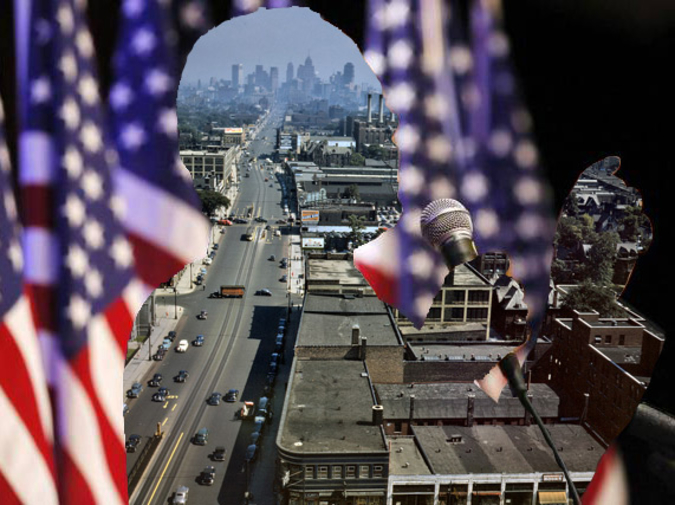 Baby Hitler was getting bored. Mother had been away longer than usual. He had already played with the rattle and looked at the picture book and eaten some cheese and now he was ready for Mother to come home to play with Baby Hitler and pet his hair and make his dinner and then sing to him before bed.  He watched the shadows growing darker in the window. He punched himself in the leg. It hurt, but it felt good, too. He hit himself again and watched his skin turn pink and then darker pink and then back to white.

A whirring. He looked to the corner, where the interdimensional time portal was starting up. Oh yes, thought Baby Hitler. Now things would be more interesting. He did not know how long he had to wait until Mother was home. He did not know what kind of foe might appear in the portal, whether they would be armed with weapons or photos or information. Sometimes they just cried and then slunk back to the portal. Sometimes they read “war crimes” to him until Baby Hitler got bored and buried the scythe deep into their legs or bellies. Most of the time they talked about how they had come back in time to murder Baby Hitler. Sometimes they even tried.

He lit one of his mother’s cigarettes and exhaled a cloud of smoke into the cottage. It was getting darker outside. He would need to dispatch this foe quickly, so he would have enough time to clean the floors before Mother got home. Some days Baby Hitler felt like fighting more than other days. Some days it helped make the dark feeling go away. Today would be one of those days.

He kept the cigarette in his mouth, picked up the scythe, and waddled to the far wall, where he waited while the outline of a man materialized in the spinning portal. Who would be coming to see Baby Hitler today?

The portal whined and spun and finally a man materialized in the corner. He was wearing the clothes the people from the future usually wore—a uniform of dark cloth, with a white shirt and shiny thing hanging down from his neck. This man was dark-skinned and at first Baby Hitler thought the portal was not done with him yet, and then that he had been damaged on the voyage. But then the man took an unsteady step forward, and another. He looked down at Baby Hitler.

“Oh yeah…Baby Hitler,” he said. “You know I wouldn’t have a,” he closed his eyes and tilted his head toward the roof of the cottage, ”wouldn’t have….a….borted you.” This man had a lazy, sing-song way of talking, like Baby Hitler’s uncle Werner after a few hours of drinking the dark liquid with Baby Hitler’s father. “I’m not in favor of...aborting...anybody,” the man said. He looked right at Baby Hitler, the first person who had come out of the portal looking down at baby height.

Baby Hitler was transfixed by the man’s skin. It was dark, the color of chocolate. Baby Hitler had light skin that turned pink when he hit himself in the leg, red when he got angry or cried. This man’s skin was dark and beautiful and practically looked like a coat of armor compared to Baby Hitler’s white and pink covering.

“You know Baby Hitler,” the man said, closing his eyes again and tilting toward the ceiling. Baby HItler looked at the ceiling but it was still just the ceiling. The man opened his eyes and took something out of his pocket and held it up for Baby Hitler to examine. It was shaped like a pencil, but made of shiny silver, with a thin blade like a knife on the top. “You know Benjamin Franklin invented the scalpel,” he said. “When he was working with Noah on the ark. The Noah’s Ark. You might have heard about that. It was an important ship for our founding fathers, the pilgrims.”

The man’s voice was calm and reassuring and Baby Hitler leaned back against the wall. He sucked on the cigarette and exhaled.

“You know those cigarettes are a carcinogen,” the man said. “That means they can kill you.” He paused again. “Speaking of…killing you…you know it would only take me one incision with this scalpel to…” he closed his eyes and tilted his head again, “...kill you Baby Hitler. I’m a doctor. I have those gifted hands.”
Baby Hitler clutched the scythe. Baby Hitler’s doctor was a lumpy man who pressed on his body and asked his mother questions. Doctors could kill people?

“You know when our founding fathers, John Adams and the like, when they signed the Ten Commandments they said ‘thou shalt not kill’ but not many people know that in those feudal systems that existed in such times, grain was actually the most powerful commodity, so when they said ‘thou shalt not kill’ what they really meant, in the lexicon of the times, if you look at the science of the Egyptians and what Mary and Joseph went through just to travel to America…”

Baby Hitler loved the way the man talked. It was like the nursery rhymes mother sang to Baby Hitler, soft and reassuring and musical and he nearly found himself drifting to sleep, only to wake up when he lost his grip on the scythe, and he awoke to find the man still talking, still pausing to stare at the backs of his eyeballs, head tilted toward the ceiling. He said the word “brain” and “Jefferson” and “surgeon” and “sphinx” and he had some idea that these things may not all go together but the way the man said them sounded so nice.

It was almost dark outside. Mother would be coming home soon. The man continued on and Baby Hitler wondered what kind of story the man was telling. He waddled forward gripping the scythe and the man backed up a step, held the silver object up in the air. “I’ll stab, Baby Hitler,” he said. “I am a stabber. I’ve stabbed.”

Baby Hitler dropped the cigarette on the floor and sunk the scythe into the man’s shin. Baby Hitler backed up and waited. He watched blood seep out of the wound. Most of the time this was the ending – his foe would slink back to the portal and Baby Hitler would try to clean the floors before mother got home. He would play with the rattle and see if there were any spiders in the corners. But this man did not slink away or scream. He took off his shiny neck cloth and wrapped it around the wound. Baby Hitler took a step forward and the man backed toward the portal. He was calm. “Okay Baby Hitler I guess I shouldn’t be…surprised…but still I can fix this because I have those…gifted hands….”

He shuttled backwards and the neck cloth grew red and dripped a thin line on the floor as the portal began whirring. The man was still talking in his slow, musical way. Eventually the portal did its work and the man’s talking was swallowed by the portal’s whine and replaced by the familiar noises: people moving past on the street outside, the chirp of crickets, the soft scuttling of spiders in the corner. Baby Hitler relit his cigarette and checked the window again. Mother would be home soon. For now, he was happy for the silence.