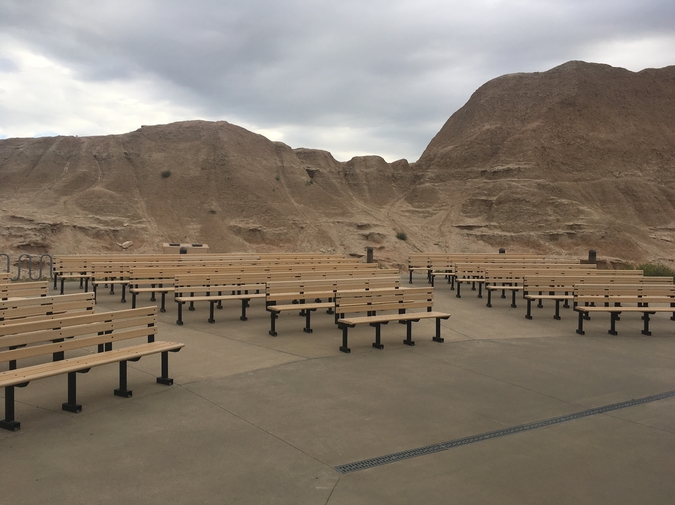 After the painting, Experimental II, by Jill Van Sickle. An abbreviated version of this piece, entitled "11 Hypotheses," was part of the Sister Arts Ekphrasis show, Hudson, Wisconsin, June 2018.

That is not a kitchen faucet. That is a human figure.

Elizabeth emailed me and a lot of other poets to remind us we promised a year ago not to take part in readings that only included white writers. I had forgotten that promise. I’d said yes to the show already without wondering. For weeks I wrote on my to do list, Lee. I meant to write to Lee and ask, Who else is in this? Are we all white? Because if anything will help more than my backing out now, leaving a painter in the lurch, some kind of conversation will help. To remind. To ask. To make awkward. If necessary.

Unequal to beginning that conversation, I was also unequal to writing a poem, as instructed, as agreed to, as given several generous months to do, in response to the painting. The reminder emails took their places in the great milky abyss of my inbox.

I write some poems that look at objects—a fleece jacket, a shirt with a seam down the back, a certain typeface I’ve seen on a dozen signs and book covers this year. We the people build these objects, and we trade in them, wear them, hold them. The objects make us, and then we make more objects, choose more objects, are changed again. The poems try to read these makings, these uses, these changes. As though the manufactured things we see all the time have something to say. As though our liking of them has a message for us, or several. Lavender milk. Glasses with clear plastic frames. Men’s pants so short the socks show. The titles of the poems are the names of those physical objects, and the poems voice all the ways I can read them. As though the objects had angles. As though each angle were a fortune, a talisman, a relic, a title for a sociology dissertation.

I show two of the poems to my poetry group, and they look and look and look at them. And look. The poets have a lot of tentative things to say. Is it—about distance? What does the—cloud...mean? What could the hardness stand for? There should be—a sheep. Yes. Add a sheep.

I send the image to Walgreens. I pay for a four-inch square print and an eight-inch square print. I tape the small print to the bedroom mirror and leave the large print on the desk. My 10-year-old daughter asks, What’s that? She looks for a long time. I tell her I’m to write a poem about it. I ask, Do you have any ideas? Quickly, she stops looking. Runs up the stairs.

My poetry group comes over, and I show them the image. I need to write about this. They keep their distance.

Stacy is an oil painter. I call Stacy. I chose this in November. I chose it because it wasn’t a wolf, and I’ve waited until the last minute and I don’t know what it even is.

Stacy asks me, What drew you to it? She says this artist is gutsy. She says, That is a lot of white.

She talks about implied lines. She talks about contrast and less contrast. She says to write about the discomfort of not knowing. She tells me, You’re good at awkward. She says there’s maturity in mixing two opposites. Yellow, purple.

Stacy says it’s possible to read a painting left to right, like reading English. She has the feeling the story has only begun. That we’re mostly seeing background, not action. Unless it’s the other way around. Unless the subject is light.

Stacy says, This isn’t the last minute. She says, You have two whole weeks.

I hired a poet I admired to critique a big stack of my poems. The poet sent her feedback to me in a letter. She wrote that my poems “rarely connect the banal with the transcendent.” After that, I didn’t write for months. Then I sat on a rock by a lake trying to write about feeling hurt. A duck swam up, and I wrote a poem.

When the poem was published, both of my aunts and my mother and two of my cousins wrote to me saying, Congratulations. I could see the wet duck perfectly. What a beautiful wet duck.

Years ago, over dinner, my friend Emmie passed me a poem of hers, and I read it. I could hardly speak, it was so wrenching. Tears came. I had no idea, I said. I’m so sorry that happened to you.  She looked very slightly puzzled. She said, It’s about a flower. Do you know the kind? The bud grows like an inflating balloon, and suddenly the balloon turns inside out, is suddenly something new. I’ve always loved that kind of flower.

I wrote a poem in the voice of a blackberry vine full of lust for human contact. Sometime after my friend Stacy read it, she started working on a three-foot sculpture of sanded plywood—smoothed and smoothed—of basically a vagina. She used some kind of wood-burning tool to engrave the words of my poem into it.

What if we read only the tangerine, only the pink, only the yellow?

Almost every poem I’ve written is three-quarters of a page long. At most. And has lines. Short, left-justified lines. The lines—I’m not lying when I tell you I thought of them as brush strokes. They seemed to belong. I couldn’t say why. That poet I admired, that poet I hired, had something to say about the lines. To quote her exact words, I would have to open the file and skim through her letter, and I won’t do that. But I remember that she described the way my line breaks worked. And then she wrote, “We have a name for this kind of writing. It is called prose.”

I sat in a dark room looking at a black vase. I know they were just reflections, but it seemed as though bright lights had been fixed to its surface and were shining out.

I heard a small plastic object drop onto a wood floor. That might have been part of the music. I remembered then that an hour before, walking into the building in the bright sun, I saw a soft, dark brown shadow glide up the brick wall among the vine leaves, then take cover in a crevice above a window frame.

Another room was white and light and stacked with glass shelves of glass objects, and in the music in that room was the sound of shattering.

So much whiteness is just another way of not doing. Of being same. What kind of art is there to make in this moment?

Well, this is awkward.

I don’t know what a line is for anymore. Stacy said, on the phone, I can cover up my mistakes and call that texture.

Carolyn Williams-Noren writes poems and essays (and grant proposals, newsletters, and other sundry for-hire projects) in Minneapolis. Her poetry chapbook, Small Like a Tooth, is available from Dancing Girl Press, and another chapbook, F L I G H T S, is coming from Ethel Zine & Press in 2020. Carolyn is the recipient of a McKnight Artist Fellowship (2014), Minnesota State Arts Board Artist Initiative Grants (2013 and 2016), and a Loft Mentor Award (2010).