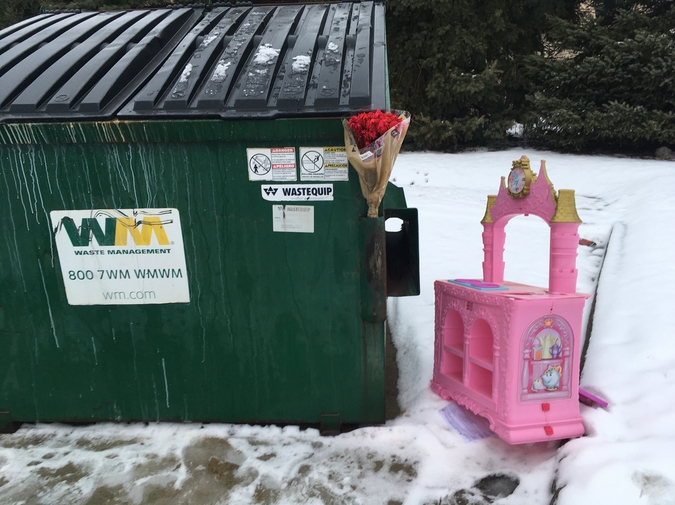 In the Brooklyn bar with skee-ball and dollar hot dogs
I tell a woman I'm a taxidermist for celebrities' pets.

“Jay-Z's got an alligator suspended
like a chandelier in his living room,” I say.

"Once," I add, taking a long pull from my PBR,
“I coiled an anaconda like crown moulding

in Britney Spears' basement."
It’s another storm-glamoured night out in Williamsburg—

"One time I went to this wake," she says,
"where the dead guy was sitting up,

embalmed to look like he was fishing.
There was a rod and reel and a smile

on his face like he had it all figured out."
Last call. She and I head back to my place,

cutting across McCarren Park
as yeast from the bread factory loams the air.

"But what was the hook baited with?" I ask her,
and she pulls it, clean and gleaming, out of her mouth.

"What was he hoping to catch?" I ask,
and she smiles, showing me her needle teeth.

I unlock my door. "Haven’t we met before?"
I walk into my room and she's already there,

sitting on my bed, waiting for me.
“You look like someone I know,” I say.

Which Is to Say

as a woman slides into the booth beside mine
dressed in neon boots, a neon loincloth,

gladiator shoulder pads and helmet—
then her friend joins her, and another,

until the whole room dawns
with glitter warrior women

hungry for hash browns, eggs
scrambled, coffee, grapefruit juice if you have it.

I finish my meal, shed a few dollar bills,
and stumble into a parking lot

where a storm stomps its hooves so violently
I shout "I only have a credit card!"

I could die right now, I think.
Right now, and I would still be hungry.

Todd Dillard's work has appeared or is forthcoming in numerous publications, including Best New Poets, The Adroit Journal, Fairy Tale Review, The Boiler Journal, Barrelhouse, and Booth. His debut book, Ways We Vanish, was released from Okay Donkey Press in March 2020.