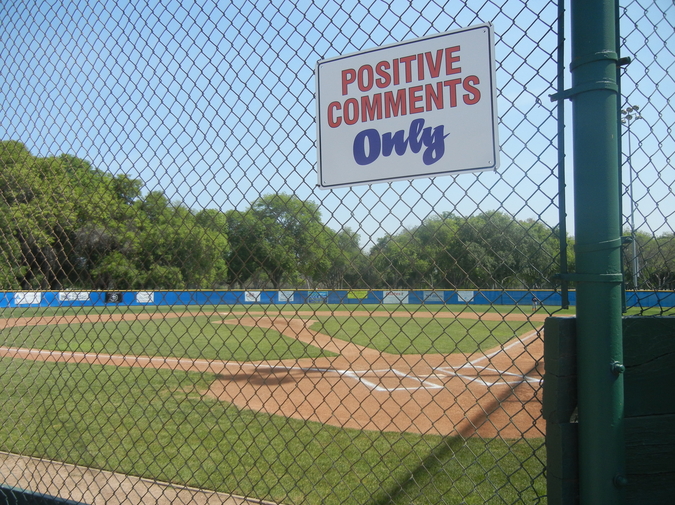 
I no longer enjoy the game,
yet I play every Sunday,
trading church clothes for a uniform,
exchanging a plate passed down the row
with my offering
for a mouthful of sunflower seeds.
At ten, I could recite the height and weight
of every ballplayer in the big leagues.
At forty, I can’t remember the last time I even
watched a full nine innings.

I stand patiently in center, awaiting a lazy fly ball,
as if that position in the middle of the outfield
offers a reprieve from the wicked line drives
of my marriage.

Teammates’ encouraging chatter reverberates off
dugout walls in between each at-bat.
The only time we speak to one another
is when it concerns the kids.

What used to be the highlight of my week
has turned to drudgery.
What was once a way to reclaim high school glory
is now an attempt to let go of ghosts.

The third base coach sends signs;
I disregard every one,
not because I forgot what they mean,
but because when a man
is no longer in love
with a game,
he ignores the rules.

On this field, the object is to cross home
as many times as possible,
while in real-life, I try to avoid it any way
I possibly can.

I’m there, faithfully, every week,
stretching and warming up muscles
I don’t even mind if I pull,
swinging through pitches I don’t care
that I hit or miss,
running around the bases
as if I’m chasing my honeymooned,
happier self.

She winds up and launches herself forward
the way her private coach has taught her to,
as if the blur of her swinging limbs
is sure to deliver a strike to the center
of my squatting body.
But the balls bounce before they reach my glove,
as if each pitch suffers a mid-air coronary,
each bounce a gasping last breath.
The lessons are not working.
Forty dollars, thirty minutes a week,
and she can barely reach the
thirty-five foot distance from the mound
to home.

My first reaction is to chastise her
for not being able
to hurl the ball across the plate
the way the other coach’s daughters do,
to chide her for not generating the velocity
I did when I was a kid,
a fourth-grade phenom who bloomed,
wilted, then gained new life through
his son.

He played two years before quitting,
before he could no longer tolerate being told
that he could do better,
before being lectured that his carefree
childhood efforts were a reflection
of his father.

I am an older and wiser target for her
than I was for him, a matured dad
who understands that his lower back will ache
tomorrow,
who knows that his knees are more bum than
ever before.
I have learned to ignore
each ball skidding in the dirt,
learned to save my lectures for more pressing
issues that will, no doubt, occur much later
during her teenage years
because I know each pitch is,
simultaneously,
my babygirl's best attempt and
a daughter’s apology.

Daniel Romo is the author of When Kerosene's Involved (Mojave River Press, 2014) and Romancing Gravity (Silver Birch Press, 2013). His writing can be found in The Los Angeles Review, Gargoyle, MiPOesias, and elsewhere. He teaches creative writing and is the Head Poetry Editor for Cease, Cows. He lives in Long Beach, CA and at danielromo.net.