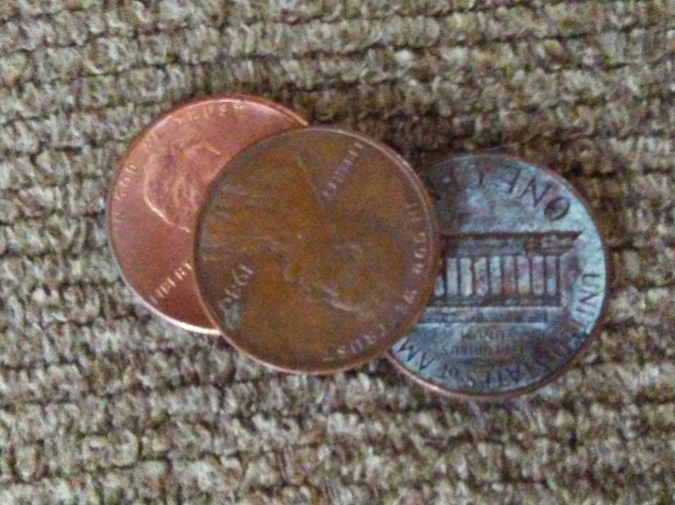 After, you wallow and listen to Regina Spektor. You always thought she was cute, the kind of woman who smiled after telling you her childhood best friend died of cancer. MPDG. Piano notes taste like almonds to you, and the songs taste like sour, not-yet-ripe ones. You listen to the album again, turn it over like a coin in your mind, and conclude it tastes like sour pennies. Fake copper dirty truths still somewhat shiny. Click each note against the back of your teeth. A hardness twirling with your tongue. Knock knock. Open mouth, lower jaw drawbridge. Don’t let the solid loneliness escape. Clamp your teeth together. The difference between an almond and a penny is the dosage.

Sad gulps. Swallow your days whole. Take up a collection in the office. Larger currency-pills plink in an “I Hate Mondays” coffee cup. No one knows who that cup belongs to. Only splotches of orange and black remain of Garfield. Company legend has it the cup belonged to the founder’s wife, who worked as her husband’s secretary for a remarkable four days, before quitting the job and him. He spaced out his schedule to accommodate a 15-minute break every two hours reserved for a raw sob. People noticed, not because he disappeared or made skewer sounds, but from the burst capillaries and redness of his face. After that, he began to wear his ex-wife’s makeup; bought a Russian bride who only knew how to say “hello,” “blowjob,” and “thank you”; and started wearing his shirts with the top three buttons undone. He purchased a pickup truck, which people thought was odd—why not go for a Maserati if business is going so well?—until it was discovered that his ex-wife had remarried a stubbled Texan, and then people understood. Eventually, the Russian girl learned how to cook the founder’s favorite meals, spoke broken but comprehendible English, and took up photography. Her favorite form was the collage. One day she realized that the things she loved most were ceramic, so she broke her figurines and some of the china from her husband’s first marriage’s wedding present, and glued pieces together. She cut herself several times doing this, and her blood stained the edges, which she believed gave the ceramic collage enough character. Assemblages of former lives, she called them, in her mind, in Russian, because she did not know how to express her longings in English. Something about giving emotions new names, foreign, like she did not own them. The words didn’t fit in her mouth. Something about choking back sobs and stifling breaths in Russian. Home. And she never made borsch or cabbage anymore—all steak and potatoes, everything covered in cheese or sugar or both. She missed the taste of home, how it tastes to be alone, even surrounded by a big family. That forever-void, a gaping vortex. Surviving off spit. Soon she stopped eating. When she found her husband hanging by his belt in the garage, she knew she’d done something right. She moved to Kentucky, sipped bluegrass bourbon cocktails, and discovered new comfort in the mist of the Appalachians. Or so you’ve heard.

The current receptionist, an older woman seasoned with gossip, related this to you. She was there, yes, when her boss wore foundation and blush—one day he’d forgotten it, and she caught him with a red face smeared with tears and snot. That’s how she knows. You don’t question her; there’s more knowledge in her crow’s feet than in your whole wrinkly brain. You dump the coins out, put them in your pocket (enough for a small bag of pretzels from the vending machine), and when you leave, you take the cup home, let the red and the bile of regret rise, dash the cup against your living room wall, and gape at the hole in the wall so that the size of your mouth and the size of the hole are the same. You move the couch. You cup your palm and pick up the ceramic debris. The idea of making a ceramic collage flashes before you, but you decide against it. You’re no artist. Your phone rings and you let it go to voicemail, still stunned by your own strength and recklessness. You get out the broom and pan to sweep up the remaining dust. It gets dark. You flip the kitchen light on and microwave frozen lasagna. You move the couch back in the living room, turn the TV on, and watch game shows. Jeopardy comes on, and nearly choking on a mouthful of lasagna, you shout, “What is zinc?” Alex Trebek: “Correct.” It wins you $800; well, it would if you were really playing. You finish dinner and see your phone on the kitchen table. 1 missed call. 1 new voicemail. You’re not sure you want to know who called and what they wanted. You prefer not knowing. You make it your purpose to not know. Until curiosity rouses the acid in your stomach. Sometimes you settle for heartburn; this time you sigh, give in. You check to see who called: your ex-girlfriend. It’s been two months. You know what the end of a relationship tastes like. Another sigh, this one accompanied by a pang in your chest. You hear her voice, but you’re unable to listen until the words “I don’t know what to do. I’ve never been so scared,” spill out of her mouth. Or, rather, the recording, the sticky residue on linoleum, an abstract fact. You think of the Russian bride’s blood on the ceramic. You think of your company’s founder’s chest hair peeking out of his shirt. You think of how when you kissed your ex-girlfriend, her mouth tasted like sour almonds. You think of getting a second job just for the sake of distraction, your sanity. You think of moving to Kentucky. You never thought Garfield was the least bit funny, even as a kid. You’ve never had borsch. You hate cabbage. You prefer vodka to bourbon. She asked you for money; she asked you to come back. You didn’t run far enough away. She knows where you live. She has your phone number. A part of you is inside her, growing. Madness rushes blood to your ears. You hear a heartbeat. Before saying a goodbye muffled by sniffles, she said, “There was a baby.”

You swish around a penny in your mouth, grab a glass of water, and swallow. You get used to taste.

Amy Suzanne Parker is a PhD student in Binghamton University's English/Creative Writing program. Her work has appeared in Entropy, The Mighty, Witch Craft Magazine, Punchnel's, Oregon East, and Burrow Press' "Fantastic Floridas" and their anthology, We Can't Help It If We're from Florida. She likes lightning.