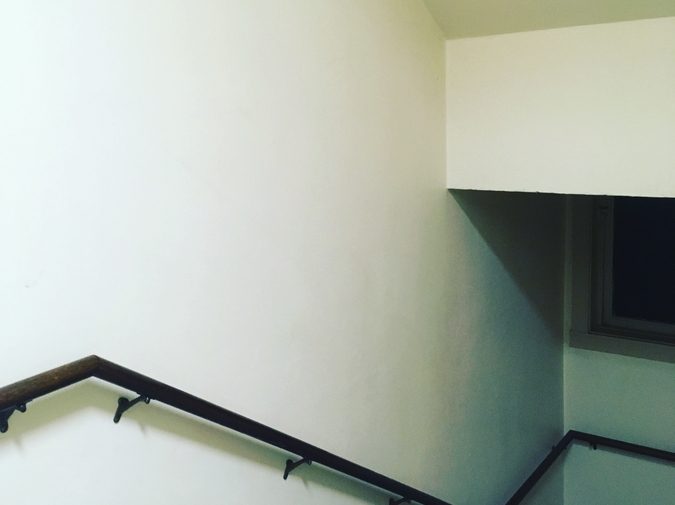 We didn’t need the room.

We liked each other/and were young.

We could’ve been anyone in that moment.

Strangers in a bar and then somewhere. A bathroom or sidestreet. Sofa bed in a rented room. A level plane on some distant horizon. Unfamiliar yet not. Clothes mainly on. Hurried and nervous. Excited. Though somehow cloistered, kept in the shadows of an ancient hallway, hushed and absent of vanity.

The desk clerk was pleasant. He had a nametag. A dog eared fantasy book creased and wrinkled along the spine. A man with a hand cast of metal on the cover. Flames and ember and sky filled with wicked. Enormous muscles. We weren’t nervous. We paid cash. We looked around. Nobody in the small lobby. Cars in the lot. He handed us the keys and said, Check out whenever. We looked at each other and smiled.

This was an adventure for us and we were excited. We were still learning about each other. Though we felt we knew lots. In an instinctual way. We were still edifying ourselves as to each other’s natures, like amateur botanists peering under a leaf, ungloved yet careful, lower lip pulled between the teeth and held, competent, scrutinizing expectedly, hoping for something new, a vein not yet discovered, pleased all the same with the complex architecture of nature, of beauty.

We’d decided to make the drive after seeing an ad in the back of the local free newspaper. Next to the ones offering real lasting, instant companionship and deals on sensual, soothing massages. Just call, we’ll dance, we’ll talk. We’d been doing the crossword together. We’d been sitting next to each other at the bar and you’d said, Hey, wouldn’t it be funny if we went here, and put your finger on the image of an ad for a hotel whose imagery featured a whirlpool, a bed with its sheets mussed, a robe like a shed skin draped over a recliner.

We took our things from the car and found the room. The motel like a small apartment complex. Just outside of town. Just south of modest. As though it had once aspired for something greater. The white paint peeling from the curves of the iron latticework shot through with bleeds of oxidation. Small air conditioning units hummed and dripped condensation on the sidewalk.

You were smiling. You said you liked it here. This is our place, you said.

I put the key on the table next to the bed. We looked around. We looked up. Look at that, I said.

Fastened to the ceiling was a mirror composed of twelve by twelve-inch panels of reflective glass, rug-sized, like those found on the floors of small living rooms, with a TV stand of fiberboard and laminate wood panel. Framed watercolor landscape long ago imagined behind a sheet of warped plastic. Coasters of fused glass. Five-liter jug of Moscato kept cool in the open carport. Spray of gravel rock and plastic shoe rack haphazardly used in the small foyer. A worn welcome mat announcing to all who passed: NEIGHBOR IS JUST ANOTHER WORD FOR FRIEND.

Like an old puzzle, there were no clean seams, a minor buckling throughout, faultlines unearthed, the mirrored tiles glued to the drop with liquid nail. Fragments of a whole.

On its surface, a wobbly reflection of the bed, the carpeting and footpaths ground in. The irregular circle of a cloth lampshade, its yellow aura of light.

It was there to catch the action, the resolve and limits of imagination.

We put our overnight bag down. Our plastic bag of goodies.

We looked up as though gazing a star newly seen.

You churned your hips and pelvis.

I churned my hips and pelvis.

Our breath smelled of ketchup.

The room held an aroma of air freshener. Perfumed lotion. Of dampness and what else. Cigarettes and release.

The interior of the wastebasket glistened. Within: a mound of chewed gum, a crinkle of aluminum packaging.

Around the sink, soaps in the shapes of hearts piled in a shallow bowl.

Further: A chain lock above the deadbolt. A rotary phone the color of an aquamarine bedpan. Mints in cellophane and an ashtray.

You took a picture and said, laughing, To send to my folks.

Just a sec, you said.

You held up your finger.

In a moment, my phone buzzed in my pocket.

We lay on the bed and looked up.

We weren’t shy. But we were kind, polite, in a way.

Is there anything better than the weight of a leg on a leg?

After, we’d hoped for robes but there were only towels. Too short and too thin and scratchy as old dish rags. It was just an ad. It was fine.

We stood in the giant shower/tub stall. We turned on the sunlamp and listened to it tick as warmed. Steam plumed. The nozzles of the whirlpool looked up at us forlornly, like fisheyes unblinking behind the haze of a dirty aquarium wall slick with algae.

You made a bowl out of a Faygo can. Your wet hair piled on top of your head. We had a book of CDs. Antique-looking condoms from the vending machine in a gas station bathroom purchased on the drive over. As well as Spanish Fly love drops. Their messages of pleasure in an italicized sprawl. Being bad never felt so good.  A line drawing of a winking devil. We had Tic-tacs and banana MoonPie. Pineapple juice in a glass bottle. A bottle of mid-shelf vodka.

In the morning, we woke before dawn. The curtain gray and thin and dull. The sky in its metered transition. The squawking of birds.

You got up and went to the window. You walked on your toes. The room hummed. The whir of the mini-fridge, the baseboard heater elements and their slow complaints.

You drew back the curtain. Your shoulders were small and strong. In the parking lot cars did nothing.

Beyond was a slash of small highway.

And beyond the asphalt, fields of wilted corn cut back, the bobbing prostrations of one thousand migratory starlings poking their beaks into the soft ground, seeking kernels, seeking sustenance, talking among themselves in quiet voices altogether loud. You smiled looking out the window and tapped the single pane and said, Look! Look at those birds.

Edmund Sandoval lives and writes in Chicago, Illinois. His fiction, poetry, and essay can be found in print and online.