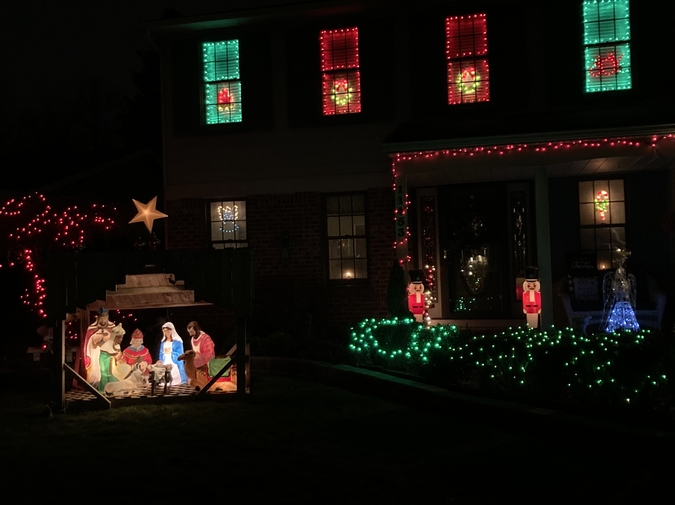 We’re spinning Vince Guaraldi’s soundtrack for A Charlie Brown Christmas in our den, a small extension the previous owner built by dry-walling in the original porch's 1959 concrete border. We erected the fake pine tree and strung the colored lights this morning. Stockings hung, etc. The previous owner also added a fireplace. Tonight, I dropped the AC so I could make a fire.

I have seen The Santa Clause starring Tim Allen more times in my adult life than I’d like to admit. Now it’s on Disney +. I forced it upon my nearly-three-year-old son Arthur and his newly walking brother Vincent after dinner the other night and they actually sat for it. Artie was asking about the plot. I said, So that guy is that kid’s divorced dad, and now that guy is Santa and that kid likes him way better now. He started calling him, then me, Santa Daddy.

Growing up, I found a VHS of home movies—various Christmases—from before my parents' divorce in the top drawer of my mother’s dresser. My dad is behind the camera, so even though he’s still at home, it’s almost like he isn’t there. In them, my brothers and I seem to be constantly opening presents. One clip shows me removing the wrapping from a remote-control racecar that I will lose interest in after a few days, but when I get it, even though I likely didn’t ask for it, I run it over to show my dad, but more so to perform excitement for the camera.

My favorite scenes in any version of A Christmas Carol are those in which Scrooge has to watch other people’s lives through a window, unable to participate—particularly the ones in which he must watch the past. Metaphor for relationship with my father?

Vincent is chasing Arthur around the kitchen table. He wobbles but he’s keeping balance and laughing about it. I strike up Holly Jolly Christmas on the Bose. Amy points her phone at the scene. We turn every moment we can into a Christmas movie.

Same reason one can watch A Christmas Story for the better part of 24 hours once a year.

I used to watch cheaply produced sentimental moral-of-the-story Christmas movies on the Hallmark Channel vacuously for hours as a kid. To get in the spirit.

It’s Christmas morning. I woke to Artie yelling presents! He asks a thousand times if he can open them yet. Amy pulls Matchbox cars one by one out of a stocking for Vinny. He tastes a pick-up’s tires. Artie dumps his stocking of cars onto his lap. There’s no camera on him yet. Still, he’s chanting Wow and rolling them on the floor. He looks at me and says, I’m so excited. He literally squeals. Santa gets the credit. Would he be less excited if he knew it from us?

Now we’re watching A Charlie Brown Christmas on the living room TV. The Peanuts gang attempts to put on a play of the manger scene. Artie points to the screen: That’s where the baby Jesus sleeps. He’s been bringing home poorly colored Christian imagery every afternoon.

In Florida, in December, we celebrate faraway places—snow scenes and old quaint cottages, dusted mountain towns and white-topped pines. We see them on cozy retail signage.

In Orlando, there’s a theme park called Holy Land Experience. I have seen only the outside of it driving west on I4, a simulation of a coliseum. The internet tells me that, inside, it recreates the city of 1st century Jerusalem. The theme park staff dresses up to reenact the stories, daily crucifixions and resurrections. They have restaurants and gift shops and church services. In a way, the hyper-commercialized impulse of the place seems a more honest stance than most traditional churches I’ve seen. Though most Orlando churches are found in strip malls.

We took Artie and Vinny to Walt Disney World to see the lights and decorations—finally do thing. We paid all that cash. Though we didn’t wait in the insane line, we showed them where Santa sat on a throne surrounded by elves taking photographs. As we walked past the scene, machines blew soap in the air to make it snow. I stuck out my tongue to catch it.

I’m up late in the tree-glow watching Home Alone and drinking. It’s the end when, at Kevin’s neighbor’s front door, the old man reunites with his estranged son and his family. Cue the moral: in the end, it’s about redemption. Redemption and forgiveness.

Artie now plays with his new large orange tow truck on top of a pile of ripped wrapping paper. While lifting a Matchbox car with the tow hook, he tells me that he and I are in the cab, and he is driving. He knows we are sitting in opposite corners of the same room, Amy, Vinny, and I re-watching the video of the boys running around the table with Burl Ives playing.

I check my phone. No missed calls from my father.

Amy’s laughing at me because I’m out of wax logs and, once again, I’m streaming the Yule Log on Netflix. I like the one that has the crackling fireplace flanked on one side by an old transistor radio and on the other by a small box television playing Christmas cartoons from the 1950s.

Michael Wheaton's writing has appeared previously in Diagram, Bending Genres, Burrow Press Review, and elsewhere. He is the publisher/editor of Autofocus (autofocuslit.com).