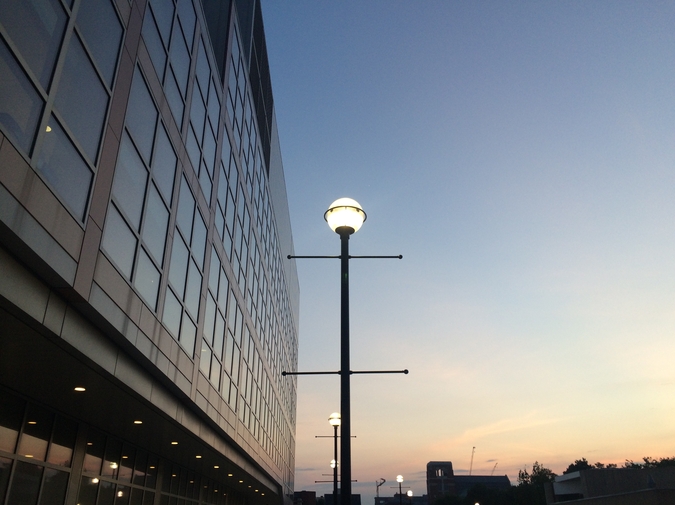 The trouble began with the intern’s new coffee pot. Modern, technologically involved and individualized, much like the intern herself. Instead of brewing a pot that would sate the whole office—each of us supplying our own mug, our own recipe for sugar, milk or powdered nondairy creamer—the new device prepared one customized cup at a time. You selected a “pod” from the assortment for which the intern had provided a rotating display stand, and chose 4, 8, or 10 ounces. The smell of it, whether “Coffee Shop Breakfast Brew” or “Istanbul Dark Roast” or even “Earl Grey Tea,” still wafted over us, but instead of an olfactory invitation to come partake in a shared resource, the scent was a signal of selfishness.

“Sign of the times,” Warren muttered, and we were disappointed that the dissolute and pessimistic Warren had spoken our truth.

Marian, maker of spreadsheets, had calculated the productivity cost of the new singleton coffee machine, with every fourth person being required to refill its inadequate water supply, every tenth needing to use the cleaning-implement pod to sweep out stray grounds, and at least one person becoming so hypnotized by the array of choices available on the rotating display stand that they lost a good half-hour to the process. But our manager Rochelle, who could often be persuaded by data and by Marian’s spreadsheets and logic models, had become addicted to the Vanilla Crème pods.

“Pod people,” muttered Warren, who had given up hope for us all.

We had grown up with workplace comedies: sitcom versions of bars, police precincts, district courthouses, TV and radio stations. So we expected Marian to remove her glasses and take down her hair; we were rooting for Ken Wang to finally work up the nerve to act on his feelings for Rochelle; we found Warren’s dour cynicism amusing rather than a cry for help; also, we believed chatting over the copier or coffee machine was pretty much the point of our being here. We were confounded by the fact that two men in accounting were both so nondescript as to be indistinguishable: didn’t they know this would confuse the viewers, that we only needed one of them?

The intern was, at first, a breath of fresh air. A special guest star with a recurring role. She arrived after her junior year at Colgate, or perhaps Colby, with a purple fringe of hair and a ring through her left brow; she spent time with each of us to learn our role at Barnaby Fox, how long we’d been there, our short- and long-term goals. Some of us felt our eyes prick with hot tears when she asked this, touched by her thoughtfulness. In meetings, she positioned herself behind Rochelle, taking careful notes as if shadowing a master painter in the studio. She flattered Marian by requesting a tutorial in spreadsheet macros. We felt newly seen, newly appreciated; and we tidied our cubicles, straightened our piles, and responded to emails promptly.

The intern’s first suggestion was for a Friday afternoon “happy hour,” and despite the logistical challenges this posed for those with childcare issues, in the end, we were glad she had dragooned us. Over a pitcher of beer, and a second pitcher of soda for those in recovery—no judgment—and a basket of garlic fries, we got to know each other again. We filled each other’s glasses, took turns picking up the next round. When Ken Wang challenged Rochelle to a game of pinball, we all held our breath. Tilt, we thought meaningfully. We could picture the freeze-frame that would end this episode: all of us crowded around a shellacked bar table, laughing at something Warren—Warren!—had said, Warren himself captured in something like startled joy.

A second Friday excursion for was less successful, as the nondescript guys got into a political argument that made us lose our appetites. As it turned out, they did have some fundamental differences. Though Ken Wang was able to defuse the tension before it became physical, the conversation had cast a pall over our group. The two men glared at each other as Rochelle signed the check and we gathered our things.

Redemption arrived for the intern when she installed recycling bins throughout the office, and programmed all our printers to double-sided. We got a little dopamine spike of virtuousness each time we slid a memo into those blue bins. Exchanged nods of self-satisfaction at the printing station when a printed page was sucked back inward for side two.

One day, some of us happened to be standing at the printer as the document emerging was the intern’s updated resume. Bullet points enumerated her summer accomplishments: Fostered sense of community among disengaged, stagnant workforce, it said, with team-building activities, and Developed environmentally sensitive policies. We grumbled among ourselves: disengaged, really? That was rich coming from a person with a ring in her eyebrow, said Warren. And Developed policies was a bit of a stretch to describe a handful of blue bins and the act of resetting Microsoft defaults. As the intern approached, we replaced her printout in the tray, our faces yielding nothing.

In the aftermath, we opened our own resumes, trying to compose bullet points that would encapsulate our efforts and, perhaps, resonate beyond the walls of Barnaby Fox.

Enter the coffee maker. Its smaller footprint on the countertop exposed a slice of Formica that had been covered by the old machine, whose color revealed that it had been protected from the effects of time and exposure—much like the pale, soft loop of skin on Rochelle’s ring finger after her divorce. For a small machine, it was surprisingly noisy. It took Warren three tries to calibrate his beloved coffee cup to the machine’s settings, with profound frustration that the “standard” eight ounce size filled approximately half his mug. He composed a memo to help others avoid the same timewasting struggle, feeling no guilt as the memo grew longer and angrier, knowing that two pages of anguish would require no more paper than one.

When the intern’s summer “exposure to industrial experience” came to a close, and she returned to school, some of us hoped the new coffee machine would be retired into a cabinet in the break room, tucked behind the bulk package of filters we hadn’t used in weeks. Ken Wang offered to come in on Sunday to make the transition.

But in the end, the pods now made us nostalgic for those golden months, when the intern had seen us and helped us see ourselves. All through the long winter we waited for next summer, when we dared to hope another intern might enter our circle and ask, Hey, what happens to all those plastic pod cups after you use them? Fix us, we would try not to cry out.

Jenn Stroud Rossmann‘s stories have appeared recently in Cheap Pop, JMWW, Literary Orphans, and Jellyfish Review; her novel, The Place You’re Supposed to Laugh, is forthcoming from 7.13 Books in Fall 2018. She also writes the essay series “An Engineer Reads a Novel” for Public Books. A professor of mechanical engineering at Lafayette College, she throws right, bats left.