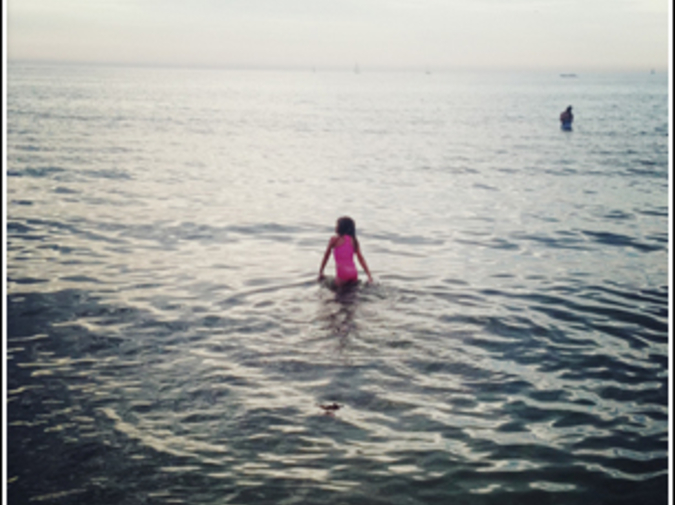 I can be naked and drunk on the sailboat and only the cat will ever know. She's under a deck chair, pressing her eyes like everything is so bright.

The cat meows like she's saying something too. She doesn't open her eyes. So bright.

I'm silent when I go inland to visit my mother. I can sit and listen and not be involved. My mother tells me how I raised myself and how she's not sorry about it. None of her bad got in with my good. I wish I'd been born water. The mark made on water refills.

I was born on a boat, and my mother says how you're born is how you'll die. She says she was hopping islands when I threw a tantrum in her womb and kicked her spine. She says I broke her back. I didn't. I remind her she can still walk. She grinds it in her teeth like a seed. "Well, I don't mean literally," she says, "but my back's never been the same." This is true. She's no longer a woman. She's a hill.

My father left in the storm of my conception. It was a typhoon to end the world, as far as my parents were concerned. They fucked below deck. My mother woke up on an island. My father was dead beside her. She doesn't let me forget it. When I go to sleep, I dream of all that water pushing me into place.

The radio says to get inland before the storm arrives, but the storm is already here. I throw a bottle into the dark and the bottle comes back. The wind says keep it. The bottle bounces off my forehead twice like a ghost trying to break in.

The cat is gone. I do a trill but nothing. I throw the bottle again and it doesn't come back. Dry land, little bird.

My first fuck was on this boat. It wasn't the other man's first. I was a pearl on a string.

The other man was old enough to remember the same things my mother remembers. When the islands were rich because of drugs. When mansions were bombed by American planes and the bodies were just left. When the dogs grew unafraid and stole babies in the night. When to meet another man for sex, you had to be careful as a surgeon.

How we met was like how two spiders meet on a leaf full of ants. There was a woman standing naked on the bar. Men poured beer down her body. Other men opened their mouths and caught the runoff from her nipples. One man started to lick the woman's legs. He made his way up. I looked away and met another man's eyes. He was the only other man still sitting. I winked. He winked.

The two of us got up to leave. The naked woman stretched out an arm and whimpered. I shook my head no and she nodded. She started singing for us. She sang the word for "butterflies," which is also the word for "faggots." Two faggots on a flower, kissing on a flower. Beautiful wings on beautiful faggots.

The man and I kissed in the alley. Someone threw a bottle from a window and we ran. The entire town was drunk and moaning. No one followed us to the boat. We sailed to one of the keys.

The man said, "They call them keys because they're long and skinny like old keys."

He put his hand in my pants and started rubbing to get me hard. There was lightning behind the clouds, but we were far from the storm. There was no thunder. The man was gone in the morning. I don't know where he went.

I swam to the key and spent the day teaching myself how to be happy and alone. I jerked off and came into a conch shell. I put the conch shell to my ear and heard my name. I've never heard the ocean in a shell. I don't know what people are talking about when they say they hear the ocean. I hear my name like I'm not asleep but I'm not awake either.

The water comes over the sides like it's being thrown by a stagehand. I think I hear the cat. I should go below and see. There are mountains in the distance, but they're really waves that tall. I would live on a mountain if I were smart.

The cat is in a cupboard with a mouse. They're both preening. The cat is licking the mouse like the mouse is a dirty extra paw. The mouse is doing that thing flies do, rubbing its paws over its eyes. I try to pet the cat. She hisses at me. The mouse's ears go flat against its head. The cat licks the mouse's back like, "No, baby. Not you." I close the cupboard door.

I open another cupboard and grab the bottle with the snake floating in it. It's rattlesnake whiskey from Florida. I pull the cork with my teeth. I drink until the snake's head is knocking at the neck of the bottle. I stick my tongue in to taste the snake. It's salty because it came from the earth. I try to suck the snake out of the bottle, but the opening's too small. I break the bottle against the counter. I eat the liquor-swollen snake like I don't care if it kills me.

There's water up to my ankles. My ankles are stinging. I look down and there are tiny jellyfish clotting the water like eggs in hot broth. There are tendrils caught in my leg hair. My mother would say this is all part of dying. The sting and the brightness after.

I lie on the floor with the jellyfish. We float closer and closer to the ceiling as the boat sinks. The jellyfish bump my back like thin-skinned fists. The light on the ceiling is steaming. I blow kisses to the light, so bright. I press my eyes and the light is even brighter. My future, too, the brightest.

Casey Hannan writes stories. His work has appeared or is forthcoming in SmokeLong Quarterly, wigleaf, PANK and Annalemma. He accounts for his time at www.casey-hannan.com.