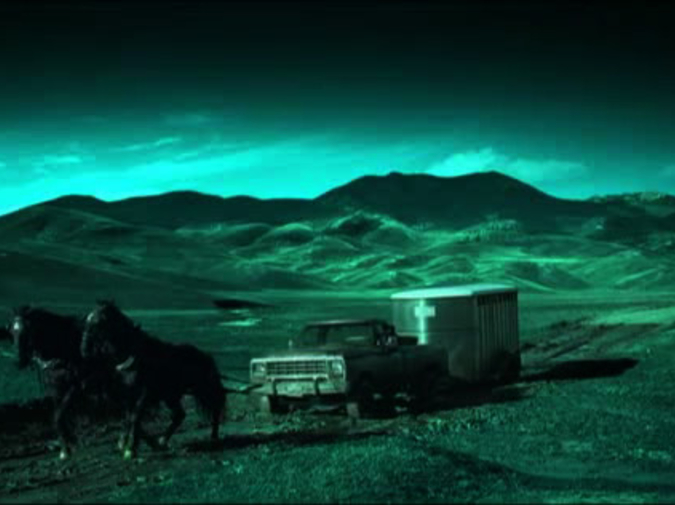 The real cowboy wears a fishing cap and one of those vests you associate with photographers, only his isn't stuffed with film or lenses or malaria pills so much as his cigarettes and a lighter, breath spray, and three burner cell phones. He has mean, intelligent, too-close eyes, and hair the color of Darkest Brown Just for Men Shampoo-in Hair Coloring. I know about the hair because he tells me about it every morning. First thing he does when we get to the shoot is shake my hand, giggle at my salt-and-pepper, then make a big show about running a hand through his greasy, mocha hair and wondering out loud how these "Madison Avenue pussies" could hire a schoolteacher to play a cowboy and a cowboy to teach the schoolteacher.

The real cowboy sidles over now and does the whole routine. He waits for me to react. I know it’s some kind of challenge and I know I’ve been failing it every day, three days running now.

“Well…” I say. I never know what to say to him, and the prospect of not having to talk to him, ever again, is the only thing I’m looking forward to when we end the shoot this afternoon.

“You think you can show me that thing with the rope again?” I say. What I’ve realized is it doesn’t really matter what I ask him. Something about the shoot – the rope I’m supposed to swing around, the saddle I lift up toward the camera, how a cowboy would sit on a horse – he’ll demonstrate quickly, get it out of the way, then start talking about something else, hitting one of his talking points. He likes to tell stories about victories over retail clerks: the time he bullied himself into a free dinner at Chili’s, when he got the middle eastern cashier at Home Depot fired, what he said when he thought the gay guy at the feed mill had shortchanged him.

He likes to talk about what he would do to Cindy, who plays the woman my character is probably taking a pill to have sex with.

They found us both in bars, me and the real cowboy, although not the same one. His was a roadhouse the advance people had tiptoed into to find “for-real fucking cowboys.” Mine was a Chili’s in the mall where I was waiting tables at night. They stopped in for a bite. I asked if they wanted some jalepeno poppers. They looked at each other and handed me a card.

“Okay everybody! We’re wrapping up in the office. Next scene is the cowboy,” the AD shouts. This is the one I’ve been waiting for: me and Cindy goofing around with a lasso.

“Here’s your big one!” the real cowboy says. He pokes me in the ribs and it hurts. One of his phones buzzes and he looks at the number. “Stupid bitch,” he says, and stuffs it back in the vest.

We're standing by the craft table. I pick at the roast beef and I wonder about my breath, but then I remember we’re not really going to be having sex, or kissing, or anything, really – just looking like people who definitely might want to have sex in one to four hours.

Cindy comes over and fills up a bowl of granola, adds some almond milk. She nods at both of us and wanders over toward her trailer. We both watch her go.

"What I wouldn't do to that," the real cowboy says. "Or is it, what I didn’t do?" He reaches into a pocket on his vest, pulls out a handful of little blue pills. He pops two into his mouth, puts two next to the roast beef on my plate.

“Where did you get those?”

“For your big scene,” he says.

“Where did you get those?” I ask again.

“Where would you not? Look the fuck around.” He waves a hand toward the rented farm, the silos and the highway stretching off in the distance, the trailers that line the driveway. “You go into one of those trailers,” he says, “there are boxes of the things. Boxes.”

“People pay good money for these things,” he says. “Not that I need it. Thought, you know,” he takes off his hat and runs a hand through his hair, “you might could use it.”

“We’re going to be standing in a field,” I say. “Messing around with a lasso.”

“He thinks he’s gonna be the first man lassoing with a hard-on,” he says. His phone buzzes again and he hits reject.

“It could take an hour. You know how slow this is. These cameras. All these people standing around.”

“She has her own trailer,” he says. I pretend to be checking my phone.  He turns to our left, to an imaginary person. “And he says he’s not married. Or gay neither.” He pauses. “Oh I know. I know!” he retorts, laughing at a joke I can’t hear. “But that’s what he says.”

“This is ridiculous,” I say.

He turns back to me. “She’s worth it,” he says, pokes me again, right in the belly. “Believe me.”

“Who you think’s been calling me?” He holds out the phone then shuts it before I can see what it says on the little screen. He takes a step toward me. His boot is resting only an inch from my shoe. I can see his molars, gray and shallow, when he talks. “I thought you seemed like a pussy,” he says. “Takes a real man to do a real man’s job. Fake man to stand in a field, play around with a real man’s rope.”

I take a step back, put some distance between us. I think about the empty apartment and the school year starting up again soon, what I’m going to hear from my middle school students if this commercial ever airs. I look at the pills: light blue and tiny. They look like candy, like Smarties or Skittles.

“Just because I’m not a real cowboy...” I start, but I don’t know how to finish.

“We’ll see,” he says. He jabs at me like he’s going to throw a punch, pulls back and laughs. He walks slow, toward the trailer, and shakes his head. I turn the pills over in my hand.