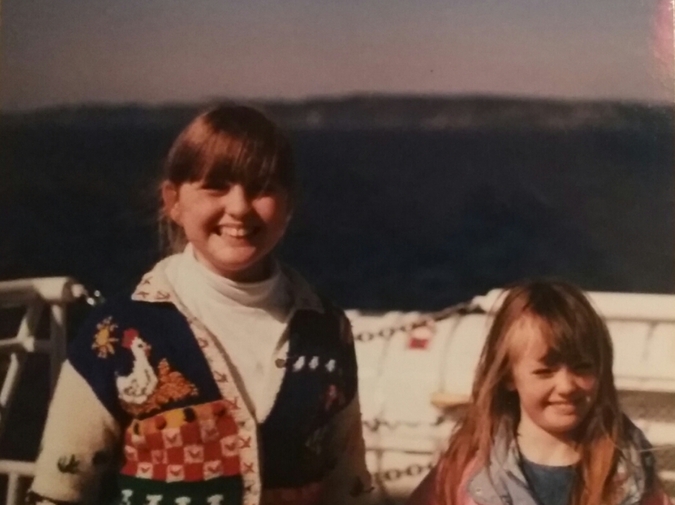 Alice Grant was gorgeous. Still is. Nowadays her arsenic-white smile sells real estate in the Puget Sound area. Wavy hair like an animated princess, a figure worth going under the knife for. In sixth grade Alice ruled the classroom we shared, along with a pack of friends who have blurred and bundled into one mass of perfect Girlness that was indistinguishable. Their power came from their sameness. They held the same Cover Girl mint green compacts with pressed powder applied to flawless complexions. I tried to find a match at Payless Drugs but they only had a clear plastic hunter green version, an obvious forgery of their opaque disks. When I swept the translucent powder over my cheeks, it did nothing to cover my fresh flush of acne; like trying to hide King Kong behind a picket fence.

I never have a MegaMillions jackpot shot of being like Alice. In sixth grade I tried, but she was a separate species—a Dream Girl whose perfection made me doubt if I was even female, even human. She was everything I was and was not. Alice didn’t let her hand shoot up from her desk the moment a question was asked. Alice didn’t seek out empty corners to write historical fiction novels. She could calculate reactions and betrayals ten moves ahead; the Bobby Fisher of drama. She rolled her eyes and passed notes. She set the standards, and I fell wholly, completely short. There were consequences.

I tried to hide from Alice’s pack during recess, but I wasn’t subtle. Not now, and not at twelve years old, the tallest girl in class wearing a bright sweater with chickens and horses grazing through the threads. I was allowed to pick out one back-to-school item every year during our family trip to the mall, and I fell in love with the barn sweater. I would open the closet and trace the knit animals, and open the red threaded barn door to reveal a secret cozy cow. This was me. I wore my heart, bright and quirky and lively, open. Before enrolling at Elk Ridge Elementary, I was unafraid.

The summer before, my family moved from Tacoma, Washington to Buckley. Buckley, known to most as that town on the way to the ski resort, is perched on Mt. Rainier’s plateau and would be recognizable to a 19th-century time traveler. It’s a town of roots—people were born there, lived there, died there. Over and over, the same families, the same roads and circles. I was the interloper.

Tacoma was full of interlopers, kids coming and going from all over the world. New students from Nigeria, Mexico and Cambodia dropped in for a year, named our class tortoise, transferred away. First days of school were perpetual fresh starts with the rare repeated face.

“You know Tony Anderson?” Alice asked me. Alice liked to ask me questions, and I never had the answers. Did I ever bother to wash my face? Did I know I was wearing high-waters? Was I a lesbian? She loved to set traps, to drop a random question in a crowd and watch as I tried to puzzle out what she meant, turn red, turn bleary. It was the linguistic equivalent of stomping on my glasses.

I did know Tony Anderson. He was small, with dark hair and darting eyes. He was a fan of punching whatever was close: walls, lockers, his open palm. He reminded me of Pierce Brosnan in miniature.

That future Queen Realtor smile caged me in. “I was just talking to him, and he wanted me to keep it a secret, but he has a huge crush on you,” she said. “You should go ask him out.”

This was not true—Tony was allowed on the blacktop. Tony had been deemed All Right. I was social cancer.

I wanted to tell her to fuck off, but I didn’t know the term yet. “Okay,” I said.  It was the blandest, safest response to something I knew in my marrow there was no escaping. I didn’t understand how to act around Alice. If I stammered to answer one of her sneering requests in the audience of Abercrombies, they would gasp and cackle and tear my answer apart: “oh my gawwwdd did you hear what she just said!?” If I pretended to ignore them they only got worse. “Look at her pretending she doesn’t hear us! We can seeeeee you!” I’d spent my childhood up in my head, grazing down to earth in books and art projects and all manner of lofty, useless bullshit. I was too sincere to live. I didn’t develop a solitary street smart—no comebacks, no punches. I was as scrappy as a Precious Moments figurine.

“I’ll come with you,” she commanded, and there was nowhere else to go but with her, silently, to the basketball court, where Tony thumped a ball at the brick wall. Alice’s friends clustered behind him with a few of the future linebackers. “Hey Tony,” Alice broke in. “Tabitha has something she wants to ask you.”

My eyes couldn’t reach Tony’s. They stayed on my shoes, the hot pink laces amidst an upper middle class milieu of Doc Martens. “doyouwannagooutwithme.”

“Eh?” said Tony, grabbing the noisy ball from bouncing back.

“She ASKED you OUT,” Alice reiterated, her powdered cheeks glowing molten.

“Why would I ever go out with you!?” I still couldn’t lift my gaze from my laces to see Tony, the girls, the world refracting me back. “That’s disgusting. You’re a freaking zit farm freak in a fugly sweater. Gross, Alice.”

I didn’t go back to our classroom when the bell rang, moments later, like a lazy sitcom edit. I veered left in the hallway into the girl’s bathroom with its mint tile and dirty peach stalls and bleach air. The reflection of my blotched face, stringy hair, bad skin, sweet stupid animals. I tore the farm sweater off and balled it up, shoved it to the bottom of my backpack. In my white t-shirt and jeans, I sunk to my knees on the tile and embraced the closest ceramic rim. I coughed, I choked, I gagged, until everything in my stomach purged into the water.

I have written this story five times.

The middle of the story stays the same. It is what surrounds it that I keep changing, the interpretation I give this one incident of many in that nightmare bullied school year, cut short when the depression became so severe and I couldn’t take it and dropped out. This is the day I remember most vividly, that moment when some part of me broke. The seam of a tear, the start of a spiral.

In these other versions of the story I am angry at Alice. How cruel! How vile! How bullshit. Raging against Alice Grant is a fist shaken at the sky. If it hadn’t been her blade, it would have been another. I was blood in the water.

In these other versions I want to travel back in time and give that girl I was a hug. A pep talk. Don’t give up on your heart. That’s the cutest sweater you’ll ever own. In truth, I can’t stomach that girl. I recoil from her photograph. I stand back and watch this scene like a pageant parent, tsk tsk-ing. Couldn’t you stick up for yourself? Would it be that hard to whip out a comeback, or punch Alice in the face? Anything, anything else? I spent the rest of that year, the rest of my adolescence, young adulthood, trying to appease the masters whose whole game was keeping me out of a win. Look, I bought the brand you don’t hate! Look, I’m being quiet, I’m sticking to the sidelines. Approve, approve, approve. I want to tell the story of a girl who pushed back, not a mewling victim. But this is what I’ve got. Give me back that sweater. You’re not worthy. You’re just going to give it up. I pick up where every bully left off. The torture loops.