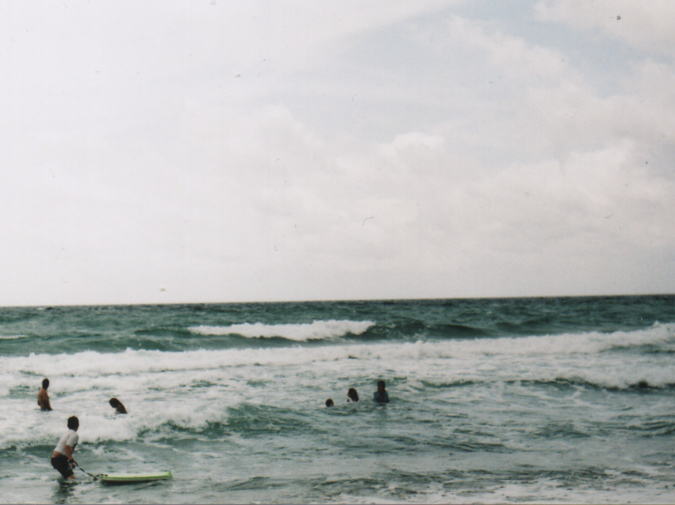 Your Mileage May Vary

In Geometry class, Vicky said that a man had broken into her bedroom in the night and that she’d talked to him until he left. She wouldn’t say what they talked about.

We were in the same classrooms, the same living rooms, the same shitty little parks, from ages 12 to 18, and often until 22, and I never felt informal with her.

I loved Tomas and I dreamed of his loving me. Later he would get a tattoo of a television in a suit on his forearm, which seemed contrived and thirty years late. But I suppose it wasn’t, or isn’t.

They broke up suddenly. I heard that she was ready to fuck but he wasn’t. I imagined them in his room facing Lyons Road, across from the baseball diamond, guitar in the corner, cut-up light through the Venetian blinds, saying – well, I could not imagine what they said.

Tomas started dating a six-foot-tall girl named Kitty. Kitty was from the private school for alcoholics and addicts. She had blue-dot eyes and long, long hair with bangs; she was pretty and her skin was freckled and pale. They fucked immediately. We did not understand. We used words like pork, hit, and slap. We said fuck and duck, screw and lose, hit and quit, bump and dump.

It was always hot where we lived. I was sweaty for twenty years.

I smoked pot on 18th Street on Sarah’s roof, looking out at the putting green. I didn’t know how to inhale and pretended to be high as we drank Arizona tea in the kitchen. Her mother came home once. She was a Romanian hairdresser with candy-red hair and said, Your eyes are red as the devil’s dick.

Vicky met a Portuguese architect on one of those webcam websites where you saw a random person from across the world. I saw penises in Belgium, but she fell in love. His name was Pedro. She decided to become a nurse so that she could move anywhere, be fucking free. We were surprised she didn’t want to become a doctor and I felt that she was making the kind of mistake that I wanted to make. There was a blue box of things from him, on her white-plastic desk with Post-It notes. She wouldn’t open it for me. We just looked up new music on YouTube and played with her baby sister.

The summer after high school, she went to Bulgaria; Pedro went, too. I heard something about a rape, a nightclub. I was in my dorm room at college, six weeks before I moved out, and Pedro messaged me on Facebook, asking me to give her flowers, asking to pay me to give her flowers. I clicked the X and didn’t talk to Vicky for four years.

I spent years and years waiting to feel like I was living and not waiting; I waited and waited until I gave up.

Things happened to Vicky and when they fell apart she never flinched.

I imagined her fucking the Portuguese architect in a town in Bulgaria, and when I imagine that summer now, I imagine high schoolers in the street in green-and-white Adidas. But back then I imagined mountains ringed by highway and hot nights with still air moved only by a rickety fan, and being ready, the feeling of being ready.

From my father’s mouth, women were broads and bitches. He learned English from 1970s dictionaries of slang and Anglo-Saxon, and talked of bailiwicks and picking up chicks at Friday’s. He didn’t believe in censorship, he said. When my father stopped drinking at sixty-five, like he had stopped playing soccer at seven, he said some people liked alcohol as much as sex. I never saw him touch my mother.

I don’t think I’m mistaken when I say that sex was the center for Vicky, or at least a cow-path to it. It was like she knew something unspoken and essential about sex, about men, something she was never going to tell the rest of us about. Like she had seen something, recognized something, in the face of that man, back as a twelve-year-old girl, still with an accent, already with hips, with a silver Walkman she slid in her Hello Kitty backpack. I imagined her sitting on her scratchy, flower-printed sheets, calmly watching the window slide open, knowing she knew what to do.

People said that sometimes she looked fuckable and sometimes she looked like a witch. She had olive skin and round eyes that always looked purple and bruised. Her hair was thick and dark, and when she brushed it, it fell in loose and wet-looking curls. There was a gap of two fingers between her breasts, where her sternum showed; as a teenager, she wore boot-cut jeans with big buttons and striped T-shirts that clung to her body. Once, I asked how she was so thin and she said she’d been hungry in Bulgaria.

In college she suddenly studied ballet and was excellent, but, I think, would have found it egotistical to consider anything a calling.

I saw her at a restaurant, the June after our last year of school. It was hot and wet and I felt like I would never feel a feeling again. She had finished a Masters in Nursing. I had finished a Bachelors of Arts and was scared shitless. She wore lacey button-downs that tied around her neck and indigo pants. She cussed a lot and spoke assertively. She said she would get a doctorate in Nursing after working for a few years and we didn’t believe her. We asked how she liked Nursing and she said she was not afraid of dying or of death.

And Then He Got Squished

Last summer everyone was wrestling. Claudia started it. She said It’s been so long since I touched someone and threw Tobias on the ground. His girlfriend Marley started laughing. Look at that! she said, and we all sat around with our beers. Then Marley started dancing really fast, pointing her toes together and then pointing them apart. She was wearing this short black dress and when I looked up at her dancing I saw her butt. Then Claudia tackled her, too, and Jan. And then Bird tackled all of them, and then I joined in. I got Marley eventually, pinned her down. She looked so happy, with her small teeth poking out from her lips.

We started learning moves and everything. Bird had been on the wrestling team and I remember him teaching me how to take someone down. He had me grab behind his knee and push my head into his hip. It felt cool, like I was so close to him without it being weird or shady or something. I remember looking up at him, and he was looking down at me, with his shaggy, sandy hair. But it wasn’t sex I felt, it was something else completely. Like he was going to be my friend forever.

Claudia and Jan and me were talking about moving further out that summer. Claudia hated living in Williamsburg with a bunch of advertising snobs. Jan hated living with her mom. I kind of liked where I lived, but I lived with Cole and we’d kind of realized it wasn’t going to last, suddenly, the week he went to Florida. So it was kind of sad to go to the grocery store and buy chicken or whatever and then just sit there and talk about whatever.

So we were thinking of moving to a big house in Sheepshead Bay, one of those mafia places with flaking white columns and Astroturf hedges. We’d take the B all the way and look at listings, buy weird yogurt at the Turkish store, walk around the old gyms and insurance offices. We’d start talking about whether they had a good floor for wrestling, like some study with carpet or an old garage with cork, and the old Russian ladies showing us around would say, Sign? Sign now?

But anyway, we didn’t end up moving. Jan ended up going back to school, so she needed to save money. Claudia ended up moving in with a guy in Jersey City, I slept over once. They had big windows you could see Manhattan from, they were bright blue in the morning, like a computer screen. Bird died on his motorcycle, and when Claudia called me, I thought she was fucking with me and I started laughing. It was the sort of joke Bird would pull, to tell Claudia Tell her I died. I started yelling Bird, shut the fuck up. The last thing they’d done, that night, was watch Narcos, she kept telling me We watched fucking Narcos, we watched fucking Narcos and then Bird got squished. And then I got a cold that didn’t seem to go away for weeks and weeks, and Cole cheated on me with a girl who’d called me Rat Ears in high school, and it got cold by the bay, colder and colder, and no one wanted to go there anymore.

Esther Manov is a writer.