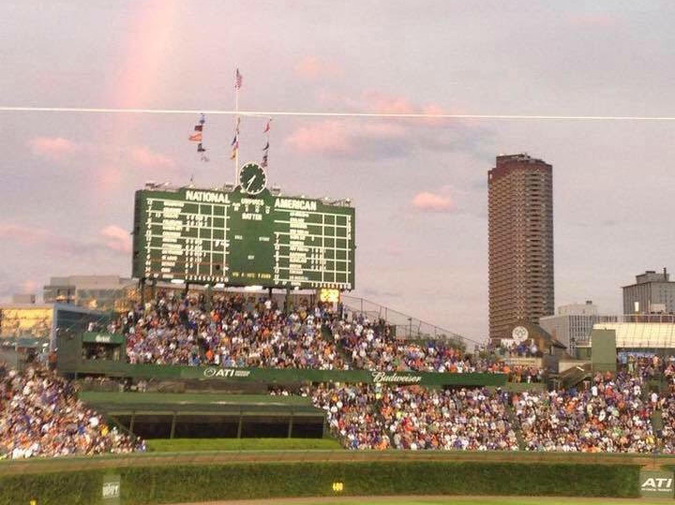 If it never happened,
would we go on buying
the season tickets, scuffling
through turnstiles, slowed
at the bag check?

If it never happened,
would we split a pizza
and a pop, a bag of chips
or a beer, huddling
as we handed over the cash?

If it never happened,
would we still applaud
the blue pennant tentative
to ascend the flagpole
after a series’ win?

We flicker in our seats, dimly
recede, but never leave.

Broadcast
“Like a blind man at the ballgame, I need a radio.” ~Annie Dillard

In the stands, I twist the dial to find you.
I click the knob then dump the clothes pile.
Walking to Dairy Queen I hear your fear—
he gave it up in the ninth, alright.

The scenes your consonants round—
those ballpark sounds—scruff rough
on my skin. You dictate my stillness
and my bend. Along the network line,
you refine each strike in attempts to mend.

Sandra Marchetti is the author of Confluence, a full-length collection of poetry from Sundress Publications (2015). She is also the author of four chapbooks of poetry and lyric essays, including Sight Lines (Speaking of Marvels Press, 2016), Heart Radicals (ELJ Publications, 2016), A Detail in the Landscape (Eating Dog Press, 2014), and The Canopy (MWC Press, 2012). Sandra’s poetry appears widely in Subtropics, Ecotone, Green Mountains Review, Word Riot, Blackbird, Southwest Review, and elsewhere. Her essays can be found at The Rumpus, Words Without Borders, Mid-American Review, Whiskey Island, and other venues. Currently, she is a Lecturer of Interdisciplinary Studies at Aurora University outside of her hometown of Chicago.