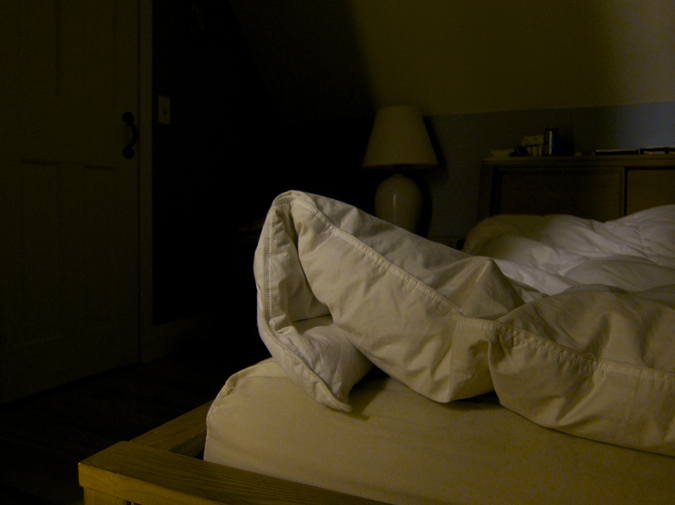 Everything That Ever Was & How It Came To Be

boomed up the stairwell telling us breakfast would be ready
soon, that it was time to wake up & get dressed, demanding

to hear the pitter-patter of our little feet. Our mother
conducting a stove-top symphony in the kitchen of eggs

water for mashed 'taters slow-boiling on the back burner,
spitting & hissing from time to time, spilling over the rim

of the steel pot, the flames underneath dancing, twisting
like worship, overcome by the spirit, they would writhe

& flicker as drops of foam rained down, until it was determined
that the heat should be reduced, brought to a slow simmer,

& sometimes pancakes sprawled flat on cast iron, other times
the alarm clock chimed much too late for anything more extravagant

than buttered toast, but the coffee was steady, slow-dripped
wakefulness through paper filter, forbidden to pass our lips

for fear of stunted growth or speeding hearts, though the aroma alone
was enough to crowbar open our heavy eyes. We practiced

memory verses that we might earn enough participation points
in Sunday School to exchange for fistfuls of gum & candy,

I would peer out the window, hoping our journey would be
delayed by a passing train.

In A Dream, You Return To Your Childhood
& Stand In The Field Where You Once Pretended To Be A Wolf

You know now that you are not
a wolf, you were never a wolf. Your teeth

are flat & dull as pebbles buried in dust,
your pale & sickly body shakes at the first sign

of cold. You have long ago lost the taste
for raw meat. You want everything

prepared for you, preferably boxed
or handed to you in a paper bag.

You flash your most winning smile
at the young woman behind the deli. She looks

every bit as tired & worn as you
pretend to be. She wearily smiles back,

gives you a deer heart wrapped in wax
paper. You hand her a crumpled fistful

of dollar bills without counting, grimace
theatrically in front of the other customers.

You swallow the heart whole without chewing
& the ground moves against your will,

tosses you limply backwards, cracks stone
with a sickening thud against the back of your skull.

In your periphery, you catch a glimpse
of the girl from behind the counter,

her face ringed by a pale red halo
of blood & butterflies, of butterflies & blood.

William James is a poet, punk rocker, and train enthusiast from Manchester, NH. He's a contributing editor at Drunk In A Midnight Choir, whose poems have appeared or are forthcoming in SOFTBLOW, Atticus Review, Emerson Review, The Rain, Party & Disaster Society, NightBlock, Split Lip Magazine, and similar:peaks::, among others. His first full length collection "rebel hearts & restless ghosts" is forthcoming in 2015 from Timber Mouse Publishing. http://www.williamjamespoetry.com