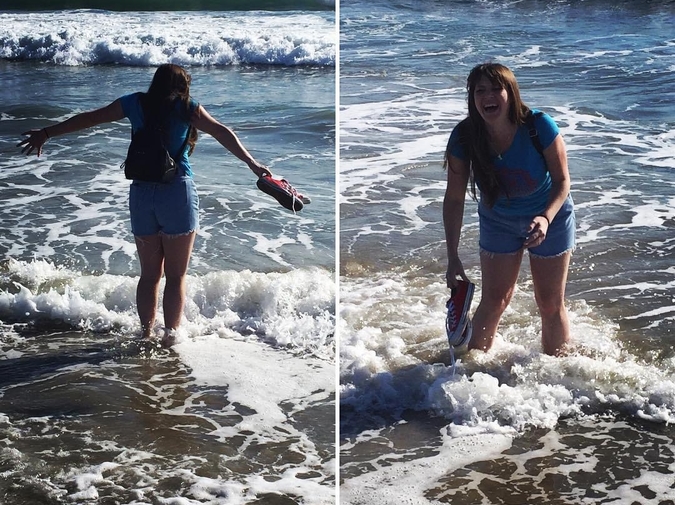 I often sign handwritten letters with the infinity sign and the words “Stay Positive” like lead singer Craig Finn does. I’ve used “Constructive Summer” as a mantra for years. My husband and I often debate the best Hold Steady song but as an excuse to listen to their songs over and over. I’m a huge fan of The Hold Steady. But when their record Open Door Policy came out in 2020, when the fifth track came on, I cried out of recognition. I always find empathy, compassion, motivation — something in The Hold Steady records that feels familiar, despite not having lived a life that has much to do with ‘the scene’ Finn often writes about. This was different. It’s not just good songwriting (though it is extraordinary); this was a moment where the words felt like they lined up with some kind of tattoo I’ve had inside my ribcage for years. And then, there was my face.

My husband Andy and I have now been together for thirteen birthdays each. The first time we celebrated his birthday, we drove down to Nashville for a concert. We’d only been together a few months, but it was one of those “immediately serious” relationships. There was only one problem: he was in Indiana and had a young daughter who lived with him, and I’d just applied to grad schools all over the country and had gotten into a program in Texas (in fiction) and a program in Idaho (in poetry). (It is not lost on me that you are reading non-fiction right now. The Katie from thirteen years ago would be horrified that I’m sharing her stories.) I’d applied before we met, so I hadn’t considered geography. Only two programs were close enough that we’d be able to commute regularly, and they were the last two I hadn’t heard from— Vanderbilt and the University of Southern Illinois, Carbondale. Right before we left for Nashville, I got the letter from Vanderbilt.

“I don’t want to open it now. What if it’s bad news?” I’d asked, standing in the foyer of a house where I was dog-sitting for my closest friends while they taught abroad for a semester. It seemed especially surreal to be living in Not My House with a man I loved, trying to figure out where I would be living in a few months.

“Better that we know,” he said. “Besides, if it’s bad news, you can go flip off the school.”

“Do you promise?” I asked. It was a thin letter. I was beginning to plan for a very, very long-distance relationship.

I recognize my face in that picture. I was always so glad he made sure to take a picture of me at my most immature, midnight after a concert, grinning and gesturing at the sign that seemed to tell me I wouldn’t be where I wanted the next year.

You already know there’s a happy ending. We wouldn’t have spent twelve more birthdays together if we hadn’t figured it out. And Carbondale’s letter was a lot thicker.

The thing about “Unpleasant Breakfast” is it’s not about me, narratively speaking. I’ve been fortunate enough never to have substance abuse issues, and there is a sadness in this song that I recognize, but that doesn’t really apply to me or touch me. That said, if I am shown a contemporary picture of myself, I don’t see myself as clearly as I do here:

I don’t know if “undamaged” exists, but if it does, it only does because of defiance, which is my specialty. I’ve never much cared for people’s opinions about what I could and couldn’t do, and I know that the things I’ve accomplished since my stroke— my first book, becoming the executive writer for a music festival, getting tenure, and more recently, ditching a cane and becoming a runner— only happened because I didn’t believe the narrative of what happens to people after a neurological incident. Don’t get me wrong. The short term memory loss is a killer. Some days I can’t walk well. I’ve fallen and hurt myself. Things slide in and out of place like I’m a Jenga game, though to a lesser extent, that happened before; I’ve always dealt with constant dislocations from the Ehler’s-Danlos Syndrome, which was the underlying cause of the stroke.

To those things? I roll my eyes back in my sockets. I raise my middle fingers.

That’s when I want someone to take the picture. That’s what I look like. My face is a whole body coiled in a rejection of the traditional narrative.

The year before my stroke, Andy went to AWP with me in LA, and we went to so many beaches. I’d always wanted to go to Santa Monica because— well, who doesn’t want to “swim out past the breakers/ and watch the world die” in the way Art Alexakis makes sound so attractive in the song named for the place? But no one told me how cold the Pacific was, and my husband encouraged me to walk through the sand and go up to my shorts in the ocean. I stood there, waiting for the water to hit my bare legs, and when it did, I squealed in confusion and delight. He got a picture of me waiting, screaming, and then grinning. That smile looks like the one in Vanderbilt which, I have to imagine, is the same smile that happens every time I turn to see Andy.

But next time? Middle fingers. It’s part of the whole package. Defiant and undamaged. 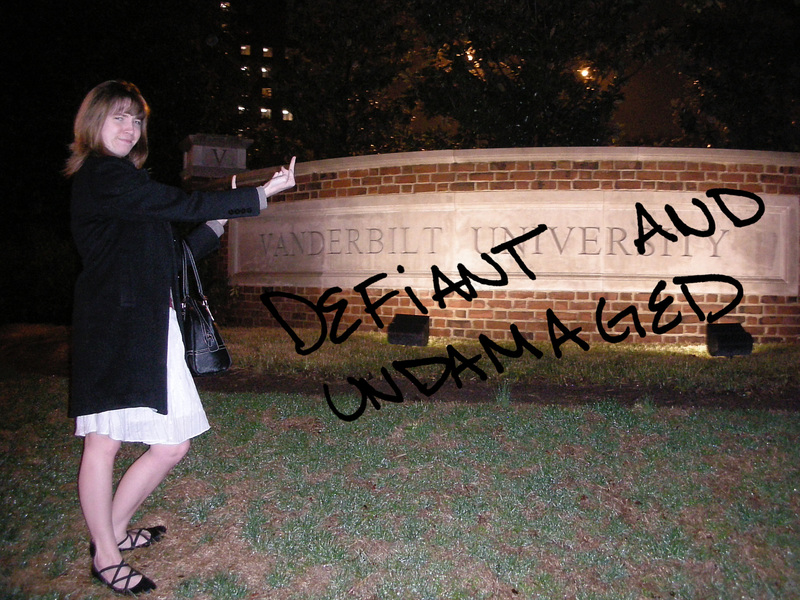