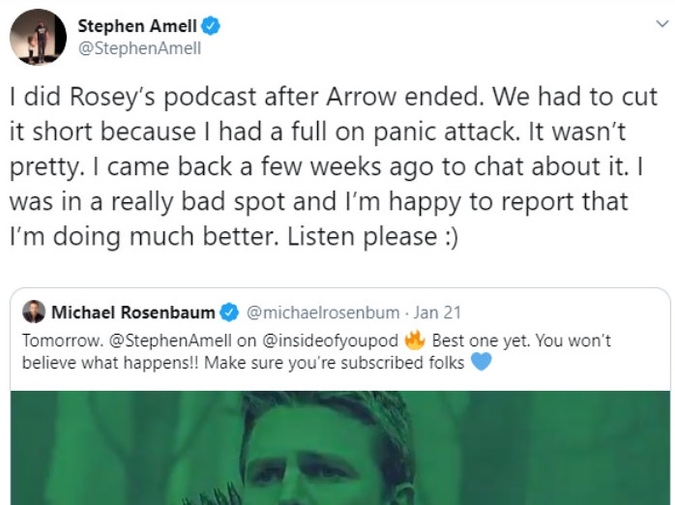 I’ve fought and lied about anxiety and OCD for years, terrified that someone would try to medicate away my “super power.” All that practice made it relatively easy to hide some physical symptoms and problems after the stroke, especially if they weren’t visible. Early last year, as my vision started blinking out, I’d wake up at night already mid-panic attack, and the only thing that helped me was remembering to talk myself through it biologically. I learned how from Stephen Amell, known for playing the lead role in DC’s Arrow television series. He was on a podcast called “Inside of You” with Michael Rosenbaum, and as he talked about spending eight years as someone else and the mental, physical, and emotional exhaustion that came with the territory… he promptly had a panic attack and left.

This matters because he came back two weeks later.

I loved Arrow: I loved that it had dual storylines and I loved the dimensionality of a character that could have easily been relegated to “dark vigilante with deep voice” like most DC heroes. Playing Oliver Queen, Amell was both deeply flawed and deeply extraordinary. He was, however, much more inspirational for me as himself, not because he plowed through the anxiety, but because he addressed it honestly and publicly. I’m not going to take down criminals any time soon, but listening to this interview makes me at least want to try and stop lying when something is wrong. In fact, sometimes I correct myself now: I might say, “I’m doing great,” but I’m trying to learn it’s OK to say something Amell says about anxiety on set: “I’m not particularly great, but I’m OK.” That’s always the truth when I’m anxious. I know I’ll be fine, but that doesn’t mean I’m great.

Looking back on the first half, Amell says, “This panic attack was in the fucking mail… it was in evidence when I tried to cancel going to the doctor that day and couldn’t pick myself up off the ground. …everything in my mind told me not to come over and do the podcast, but my brain wasn’t functioning properly, and I was still in the mindset that I was going to let people down.” Amell explains then that he’d had one panic attack on the set of Arrow in late season seven, but admits he wasn’t sure what triggered it: that it was abnormal to have stress there, in a place where, I’d argue, he exerted a certain amount of control and had the ability to disappear into character. That’s not totally unlike my classroom (though depending on the day, the stakes are either much higher or much lower). That’s my safe place. I’m home there, though I’d be lying if I said I wasn’t a caricatured version of myself, exaggerated and improvisational in ways that terrify “real” Katie, the Katie who stays up until three a.m. going over every word she said that day, can’t even really imagine without breaking out in sweat.

“I’m just a moody actor up until I tell them that I’m actually going through something,” he says with a bit of a laugh.

Before I heard the podcast, I was prone to sharing my triumphs over illness, neurological and physical, on social media, especially Facebook, partially so people would stop worrying about me. In my first month back teaching after the stroke— roughly seven months after the event itself— there was a picture taken of me writing on the windows of my classroom in Expo marker, trying to break down metrical poetry in clear glass. I got the picture from the student and posted this caption on Facebook:

When your first method of teaching (technology) fails, and then your second (no whiteboard or chalkboard) doesn’t exist, and the third (a smart board with no pen or cord to plug in) isn’t available...you can cancel class, or you can John Nash it and write all over the windows. Yes, people took pictures from downstairs. Yes, people took pictures from across the way. And I had a few moments where I thought I might die of embarrassment. But we GOT. THROUGH. CLASS. NEVER GIVE UP, NEVER  SURRENDER. (And while I know I’m technically referencing the semi-fictional John Nash in A Beautiful Mind, my actual motivation was taking a bunch of deep breaths after trying to find help and saying, “What would Charlie Eppes do, what would Charlie Eppes do...” Thanks NUMB3RS!) (And yes, I cleaned the windows. I’m not a monster.) (August 30, 2017, Facebook)

Since hearing this podcast and reading Blind Man’s Bluff by James Tate Hill, I’ve realized I’m not only not doing myself any favors by lying about my physical and mental health and leaning into the “inspirational disability” image, I would change the way I wrote about this event— in fact, when it came up on Facebook memories, I… revised. Instead of saying, “I’m great,” I found a more true thing, a way to say, “I wasn’t great, but I was OK.”

I’ve been sitting in my living room for three hours in the dark after the electricity went out while a storm raged outside. Our internet also went down, but I turned on my iPhone flashlight to continue reading James Tate Hill’s charismatic, funny, unflinching portrayal of the lengths someone dealing— and avoiding dealing— with a body that isn’t as capable as the brain that powers it. Since my stroke caused optic neuropathy in my left eye, I keep having to relearn what slightly bigger blind spots mean, what makes the pain better and worse. I was a little surprised to find that pitch black with a warm light in the distance made it easier to read.

Today on my Facebook memories, this [picture] popped up. It was the first time I did something truly revolutionary after my stroke, outside of getting up and walking. I left some things out of this story the first time I told it— namely, after all the technology failed, I went out into the hallway, sat down, put my head between my knees, and had a full-blown panic attack. When I came back in, I knew I had to count on my often-failing brain to remember the intricacies of metrical poetry, and I was terrified and manic. Writing on the windows, sure, was inspired by A Beautiful Mind and Charlie Eppes on NUMB3RS, but it was also a literal last resort, a hail-Mary to the god of one day feeling like myself again... A lot of people built to this moment. That’s why I didn’t crumble, even as I was showing cracks in the facade.

Also, I totally remembered metrics and redeemed myself in my own eyes. Anyway, read the original caption, and you see all the bravado and pride that I knew I was *going* to feel. I didn’t: not yet. I was just so grateful I made it at all. The metaphor isn’t lost on me. (August 30, 2021, Facebook)

In the first half of the interview, Amell is low-energy and doesn’t sound all the way present. When host Rosenbaum asks him if he ever cries, he earnestly, without fear, answers, “I cried twice this morning.” And when talking about his grueling schedule, he keeps making excuses for why he does it, all while admitting he is exhausted beyond any human person’s limits. And then you can hear, suddenly, his words catching up with him, like he is outside, listening to himself talk. The worst part? He actually gives a great interview and is open beyond what was strictly necessary. He says at one point, “I do love the [Arrow] fans, but I don’t want any responsibility right now other than husband and father.” But the interview ends abruptly: first, he says, “Is it hot in here, or am I just sweating? I am, I don’t know why. If you’re cool with me sweating, I’ll just sit here and sweat. Don’t worry about it, man.” He grows a little more uncomfortable and then says, “I might have to cut this short, man. I’m not feeling well at all. …I think I’ve just got to go. …I think I just need to walk. Do you mind?” He’s still more concerned about the podcast than the fact that he is clearly in crisis.

My entire life has been designed around not having to show my illness, both mental and physical— because I was afraid it telegraphed weakness and scared the people I love. Don’t worry about it. I’ll just sit here and sweat. Recently, though? I had a panic attack while teaching,  and I’ve talked about this podcast often enough that when, at the end of class, I said, “Is it hot in here or am I just sweating? I’m going to walk home,” several students realized that what looked like a manic phase was actually pure panic. A few clapped. Once again? I was just grateful I made it at all. As is typical for that level of anxiety, I waited until the last student left the room and I laid down on the floor until I felt like, at least in my good eye, my vision was sharp again. Sometimes, it’s when I’m at my most anxious that I’m most recognizable to myself— both the panic and the desire to persevere quietly, without bothering anyone.