February 19, 2022 Things That Look More Like Me Than My Face 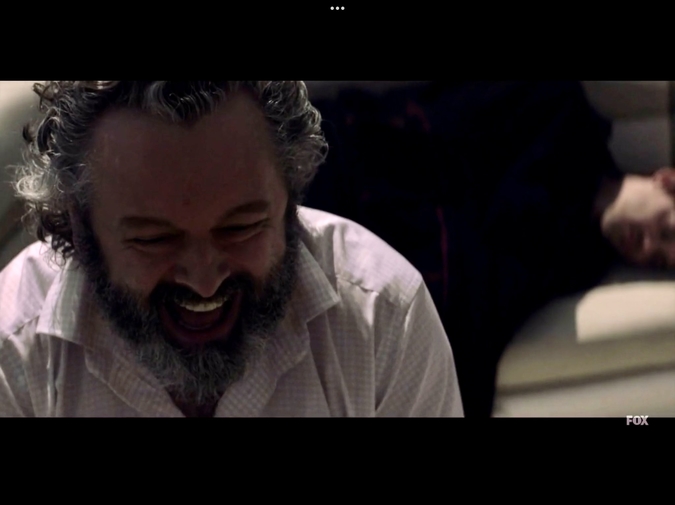 During the pandemic, I became — and as someone with obsessive compulsive disorder, I don’t use this word lightly — obsessed with a TV show called Prodigal Son. The most important character to me, Lou Diamond Phillips’s Gil Arroyo, seemed like the moral center that I always want my crime shows to have, and Tom Payne did a brilliant job portraying someone fighting the pain of trauma and who was also whole because of those same experiences. I’ve seen each episode at least five or six times and I can talk about them both by name and number. But the third primary character, played by one of the world’s all-time best actors, Michael Sheen, is a serial killer — the father of Tom Payne’s character. And through a complicated series of events, he escapes the mental institute he calls home only to be abducted by someone arguably more dangerous than him — who also kidnapped his son. To summarize and explain the last image from what is possibly my favorite constant escalation of stakes, Sheen’s character, Martin Whitly, steals a speedboat and deposits the half-conscious body of his son in the back before speeding into the horizon, whooping and hollering gleefully at the sun in his psychiatric inmate uniform.

My face is fine. Objectively, it skews close enough to the Golden mean to be inoffensive. It was closer before the stroke, before my left eye drooped. It won’t ever open or close all the way again, not really. For a while, I worked on learning how to do my eyeliner different on my ‘bad’ eye, to try and make them both look open, but even that was more like painting than it was looking at myself. After the stroke, I began to have a complicated relationship with what I looked like — namely, every morning, I would look at myself and not have even the slightest hint of recognition. I didn’t admit that for a long time: I thought I was going crazy.

There’s a name for this kind of crazy, by the way, which means it’s not actually crazy, or at least I’m not alone. I have prosopagnasia, which just means face blindness. It’s a little different when it’s your own face, because — well, close your eyes. Picture yourself. The picture you have in your head? Mine is from years ago, a different person in what felt like a different body. I can put current pictures next to pictures of her, the old me, and see the resemblance, but it doesn’t connect in my brain. That means I’m always searching for my face in a crowd or on TV or in books, and sometimes, I think, oh — there you are. You’re back. That feeling never happens when I am looking at myself.

Even though I look in the mirror at a relative stranger — the disconnect from self and body never more clear than when I’m brushing my teeth or slicking red lipstick on — I have found my face in places I would never have looked if I hadn’t gotten sick, if things hadn’t changed again during the pandemic. I always knew that spending long periods of time on screens gave me bad migraines, but I didn’t know that those were warning of the complications from optic neuritis, causing blindness in my left eye that was so gradual, I didn’t notice until it was already gone. Late in the afternoons, I would see patchy black zones with deep greens and reds, like LED bulbs flickering out, but I assumed, like everything else, it was temporary. I know better than to assume.

I have to wear dark glasses inside since I lost half of my vision. I always joke I look like whichever brother of Oasis is the biggest asshole or most high (and people immediately, correctly, joke, “Liam!”), but the glasses have a weird benefit, too. Now people can’t tell how uneven things are. The face is blank to them, too, in some ways. It’s also symmetrical again.

If you don’t immediately understand how that scene of Whitley stealing a speedboat is my face, I forgive you. I also can’t explain it better than to say that I have watched that five seconds hundreds of times, sometimes with tears in my eyes, feeling like I escaped certain death and ways of being trapped.

For the first time in almost five years, I can describe my face to you and you’ll know what I see when I close my eyes and think of myself — and I need to do that, even though this draws a jagged, desperately un-face-like picture. I am more aware all the time of the edges blurring and the blank spots in my vision and in my mirror: maybe if I tell you what I look like in my mind’s eye, maybe you can build a person from this list. I have to.