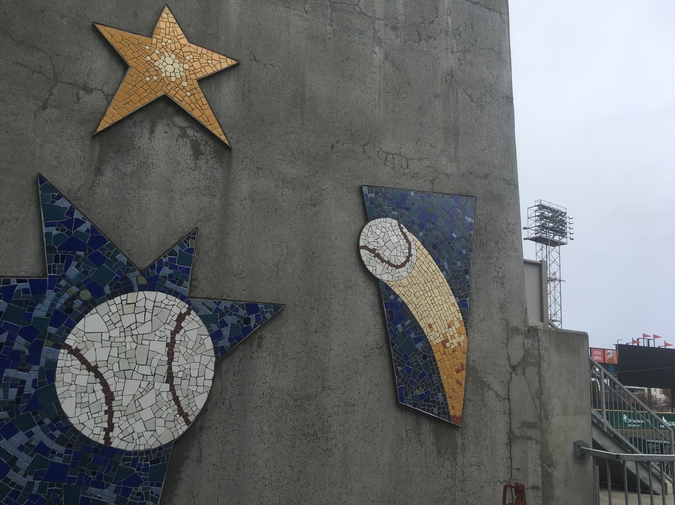 Three beers and two innings into the game, Ron launched into his usual complaints.

"Of course Asheville's team is the Tourists," he said. "They've taken over the whole town, why not the team too?"

I didn't remind him the Tourists have been around for decades, or that we grew up in Shelby. We've been coming to games this same weekend for the past eight years, and Ron's list of aggravations has only grown over time. My job was to just quietly field them.

"And this crowd?" He waved his beer over the stands at pockets of quietly cheering people. "More people can't come out for baseball on Memorial Day?"

It wasn't a terrible crowd, but there were enough empty seats that no one would notice that Ron and I bought three tickets. One sat empty for Thomas, our younger brother, who went to fight in Afghanistan nine years ago and never came back. Thomas, who was an all-state shortstop in high school, who could turn a double-play smooth as you like, whose sweet swing sprayed the ball all over the field, whose body moved effortlessly on the field in a way it could not have tromping across hot sand, gear on his back, fear or ragged adrenaline in his heart. No one on the Tourists played the way Thomas did. The team was good for a few errors, some bad strikeouts and worse pitches to opposing batters. They exhibited the kind of low-grade mediocrity you'd expect from single-A ball. It can grind games to a halt, make them feel like forever. Ron and I never admit that this is one of the comforts of our yearly trips to the ballpark. We never say that there will never be a ballplayer like Tommy Smooth, a nickname we gave him sitting in these seats after Thomas was already dead. That was back when we used to still bring him up at the games, before we realized his name sprayed out of our mouths like shrapnel.

Ron spun around when a laugh burst out behind us. Some college students crowded together a few rows back, joking and half-watching the game. He sipped his beer, thumbed at them. "Simon, you won't believe this. Beards and plaid. In Asheville. Nuts, right?"

We all left home after Thomas died, just scattered away from the hurt of it. Our parents retired to the beach. Ron and I moved here. The house had a door Thomas wouldn't walk through again. A room he never got old enough to move out of.

Ron wrote op-eds against the president, the war, the oil companies. I taught war literature at A-B Tech. I ran a writing workshop for veterans. We tried, blindly, to see war from the outside. That's what we must have told ourselves. What we really did, though, was talk to strangers about our brother in our own separate codes.

Ron nodded at the scoreboard as he drained the last of his beer. "Visitors and Tourists," he said. "No Asheville, no Home. It's a shame."

Before he could keep bitching, the crack of the bat got his attention. The shortstop scooped up a hard grounder and pitched it to second in one quick move. The second baseman threw it to first to get two. A shocking moment of grace from guys who'd never sniff the bigs.

"Helluva a play," I said. And then, somehow, "Thomas would have turned that even smoother."

"Yup," Ron said, tersely, through his teeth. The memories came, then, unwanted and in a flood. The two of us watching Thomas play in high school. Just a kid. Not a soldier half a world away, with war and death surrounding him. Just grass and fans and his brothers and the grace of his talent lending some impossible lightness to his movements, his body. I clenched my jaw, biting back the past. Muscles pulsed under my beard like buried things rising to the surface.

We went silent. Because if we kept talking, we might admit out loud why we came. To visit Thomas. To imagine another future for him, or us. We gripe about tourists and the town to avoid it. Our beards thicken over scars and creases like routes on a map of what we can't forget. A map that might, if we followed it, lead us home.