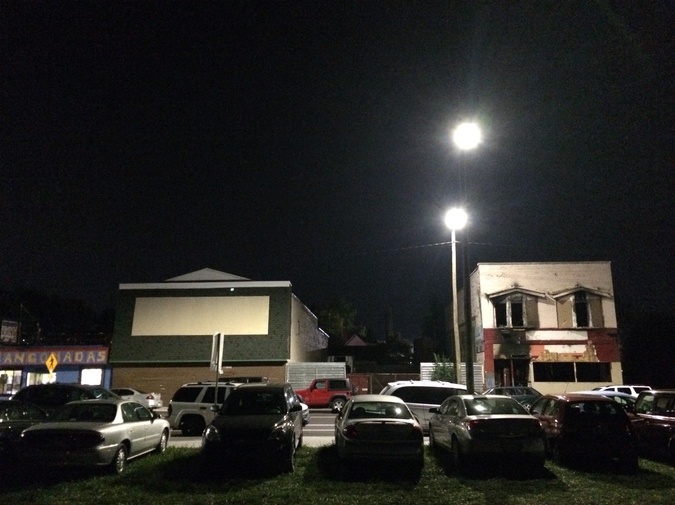 It could be any intruder, except that it is her. She was walking through a quaint neighborhood of old Victorians and Craftsman houses and a few run-down ranches when she saw a note on the front door of one of them. The note was a sheaf of paper ripped out of a lined notebook that read “FREE” in all caps and was stuck to the door with masking tape. It looked like something you put on some curbside furniture that was partially broken. She assumes that was the note’s original purpose, that someone took it off and moved it to this door, that this was that someone’s idea of a joke.

Bridget knocks first but the door is ajar, and she is perpetually lonely and wants to be confident in something obscenely miraculous like a free, abandoned home. She is new to this city, abruptly leaving her old city and driving to this one. This one sounded nice to her because she had once vacationed here as a child, was so mesmerized by her experience that she didn’t change her underwear for several days afterward. She even kept the rock in her shoe that had at some point lodged there during the trip.

And now she is back and she is walking through another person’s house with a courage that is terrifying. She is a zookeeper, or at least was in her former city, but this courage is different than the kind she needed to earn the respect of a highly intelligent silverback gorilla.

The house is mostly cleared out but there are still several items strewn about from room to room. She mentally catalogs: a desk lamp sitting on the floor, a sunken ottoman, a three-legged chair. Bridget thinks it is possible that people moved out but got tired of packing all of their useless belongings and simply quit before it was all done. Her hope is growing despite her protests.

The cabinets have paperclips, rubber bands, crumbs sharp and stiff from age, crumpled takeout napkins. One room is completely empty except for a Strawberry Shortcake sticker on the floor that is immovable and a rather striking painting of a shipwreck. She thinks the painting is a representation of the Zelda Fitzgerald, or maybe it’s the Edmund Fitzgerald. At the very least, Gordon Lightfoot sang a song about this ship, she’s pretty sure.

The fridge is still here and there are papers hanging from a magnetic clip. The first one is a blank worksheet called “Learn About the Five Senses.” The second is a science report about minerals. Beryl is a mineral. This mineral is valued for its impurities because they give it color. For example, emerald is a type of beryl. She stops reading, assumes two kids lived here and that one of them is dangerously smart.

Bridget is hungry but the fridge is barren, which is good because it means maybe the family really is gone. She removes the note from the door, closes it, gets into her car to find the closest deli. The woman at the counter hands her a sandwich and Bridget says “thank you” while holding the gaze of the sandwich, so it’s unclear whether she’s thanking the woman for the sandwich or thanking the sandwich for being food.

She gets back and the house is still abandoned. She brings in a few boxes from the trunk, fills her veins with adrenaline when she says the word “squatting” out loud to herself.

Bridget takes down the worksheet from the fridge and starts to fill it out. She writes “Bridget Burgess” under Name _________.

My favorite smell is   walking down a dirty street & unexpectedly smelling laundry from an air vent    .

Bridget’s reason for leaving was threefold: (1) She worked for one of the top zoos in the nation, but it was in a Midwestern state and she was starting to feel strangled by land. (2) In order to be the best keeper you must establish a connection with every animal, which exhausted her and left her no time for other, more human connections. (3) Her coworker had told her she was a good person and it’s been weighing on her for weeks.

Plus, she has these questions that she feels she should’ve grown out of by now. Or at least known the answers to. Like: How do toenails stay on so well? And: Why do I never see any female ice cream truck drivers? Staying in the same place, Bridget felt like she would never find the answers or never be sufficiently distracted away from them.

At work, she would be feeding the animals and would look through the opposite side of the glass at the visitors and it would be like looking at a tapestry of tired people seeing America. Kids would be shrieking and parents would be fumbling for who-knows-what in the oversized pockets of their cargo shorts or bags. They were much less predictable than the animals.

Her first night squatting and no one has entered the house. The air conditioner is not working. What little breeze there is coming from the opened windows could only be described as soupy; the air so heavy it turns into a solid right before it hits her lungs. Maybe that’s what wheezing really is, she thinks. Chunks of air turned solid crowding the windpipe.

She gets up and paces. She fills out numbers two and three on the worksheet but changes them to least favorite rather than favorite.

Before she left, she called her sister to let her know. It was the day they thought a zebra had gotten loose but it was just a false alarm. Bridget wasn’t sure how something so vividly unblendable into the environment could go missing. Her sister asked what she planned to do next.

“Why do I need to do anything anyway? Why can’t I just...forage?”

“Yeah. Squirrels in my yard forage. They search for food and then they find it and then they go look for more food. You could occupy a whole life, just doing that.”

Occupy. Fill up. As if that was something to do with a life. As if you took life and treated it like a term paper with a required length; adding an extra space between every sentence and enlarging the font just a little.

“What do you mean, Bridg?” her sister asked but kept talking, and Bridget tried not to listen to the rest.

Several days in, she knows the house is really hers, though she still doesn’t know how this is possible. She is feeling nostalgic, not homesick. Nostalgia is the purest form of homesickness because you can only really live in the past. The past is the only thing that has been clearly formed already, the only real constant in a life.

A package arrives. The label is addressed to a Penelope Apple, which sounds to Bridget like a Clue character rather than an actual person and owner of this home.

She opens the box and it is mostly bubble wrap. At the very bottom is a slim can of pepper spray, extra strength. She begins to feel apprehensive about her living situation. Maybe this is an ominous message from the note-writer, the jokester. Like this is a setup, a test of some kind. Defend yourself, you horrible squatter. You anti-contributor to society.

She closes all the windows. She splits the thick plastic encasing the pepper spray and practices using it. She thinks of the wild boar at the zoo, how if his tusk is not trimmed it will grow into his skull, ultimately killing him. Her nerves are her tusk and she can’t let them win.

She fills out the last two questions on the worksheet the right way.

She sits down on the floor next to the lamp and waits for someone to come get her.

Claire Hopple’s fiction has been published in Monkeybicycle, Bluestem, Quarter After Eight, Timber, Hermeneutic Chaos, District Lit, Knee-Jerk, Third Point Press, Foliate Oak and others. Give her column at Maudlin House a whirl. She's just a steel town girl on a Saturday night. More at clairehopple.com.