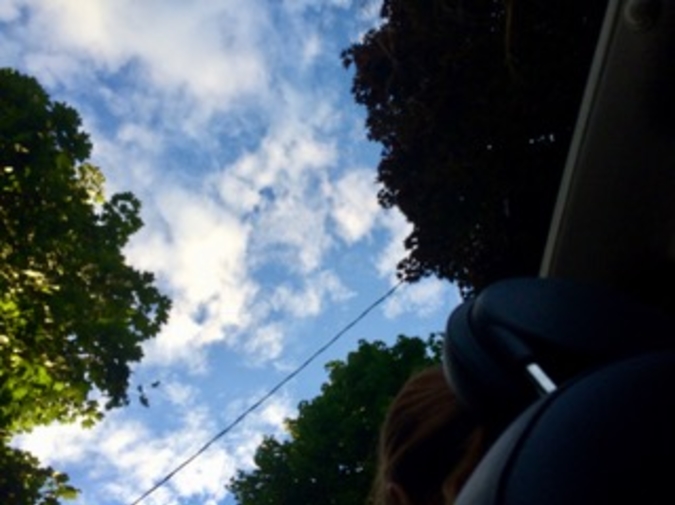 I kissed my father’s cheek for good
luck in the firehouse driveway.
We were 27 outs away from a Series
lead when he entered through Gate K.

I took my seat on the Waveland curb
and relayed Pat’s play-by-play
to guys in lawn chairs sucking booze
through the scoreless game. Grandmothers,
perched as finches, waited on my radio’s say.

The intersection bled into the ballpark’s
glow. From the streets below, we held
the diamond aloft on our exhales alone.

It doesn’t have to be
a ballgame for me
to feel included,
calmed to hear
a voice other than
my own. I walk
through the house,
turn them all on,
and say hello.

in a shout, “I knew we’d do it!
Was there ever any doubt?”
I wiped the sleep from my eyes
and breathed, driving along
the tree-lined street.

Last October 22nd, I drove
to Kansas City and was there
when the Royals won the pennant.
The town exhaled with clout.
Radio hosts said,
“There was never any doubt.”

During the game I steered
past Kauffman Stadium
on the longest road in the state.
Between the tree-lined curves
I heard the hometown call,
the broadcasters clearly stirred.

Light standards glowed through
the clouds as cars passed.
I felt serene, as if it were
my team.

Sandra Marchetti is the author of Confluence, a full-length collection of poetry from Sundress Publications (2015). She is also the author of four chapbooks of poetry and lyric essays. Sandra’s baseball poetry appears widely in Poet Lore, Blackbird, The McNeese Review, Southwest Review, Connotation Press, and elsewhere. Her prose on the game can be found at Barrelhouse, Entropy, and is forthcoming at Pleiades. Sandy earned an MFA in Creative Writing—Poetry from George Mason University and now serves as the Coordinator of Tutoring Services at the College of DuPage in the Chicagoland area. This is her third appearance in the annual Hobart baseball issue.