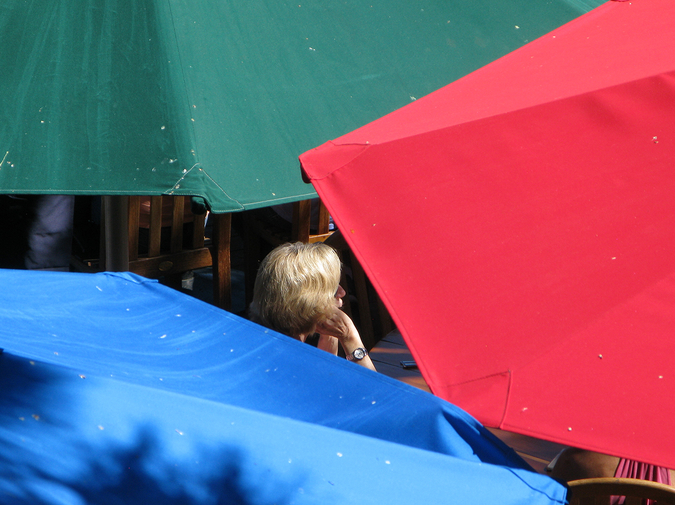 The house is settling,
the blue tarps are unfurled
for miles across green lawn,
white tombs litter the yard
like hot pimples, hard, unextractable

Procession winds black and snaking,
umbrellas suck at the sunrays,
shields blocking the evaporation
of the begged-for release
of grief

Celebration, the color of roses,
we know how heavy the lead
veil of blood is,
sing but don’t forget their voices

I have never painted with oils
but they entice me the way a muddy embankment
entreats slipping. A swamp, sludge, and the most
exceptional noises a child can offer creation. Pallet
knife finger nails mix clay red and river silt alive.
Squish-plop dance in disjointed harmony.

A mess to look forward to. A bath that will
undoubtedly clog the drain. Soil for all of its
assonance. Filth for all its creative rebellion!
Divine eyebrows higher than a lifted
poet. Divine pig in paint and foul-mouth
pleasure. Divine invitation written in fat
disastrous finger-paint smudges. Divine
thrown from Olympus, crashing down
to form a crater that’s part mud pit, part disco.

A museum carved in shit and honey. Bears wading
through the melting corpse of their former
floating kingdom. I divine a truth smeared across
the walls. It makes me cry and I’m not sure
if it’s cause of the words or the smell of rancid
bacon fat. What is spit without first a breath?

The Riddle of the Gay Sphinx

gasp flight, licking fluttering sand fleas
blanched sick in butter
I came out of the ocean French kissing
the cliffs before French kissing ever existed
DNA tasting— spit rules
pheromone snorting
Farah Moan crying on national television
I came out of a pot of bronzer
and bathed in froths of highlighter
I give myself life
yas I came

Alex Vigue is a non-binary writer from a small town in Washington State. He has a bachelor’s degree in creative writing from Western Washington University and has been published in Vinyl, Occulum, and Drunk Monkeys. His debut chapbook “The Myth of Man” was a finalist for the Floating Bridge Press chapbook competition. He volunteers his time trying to impress the importance of poetry to people of all ages.