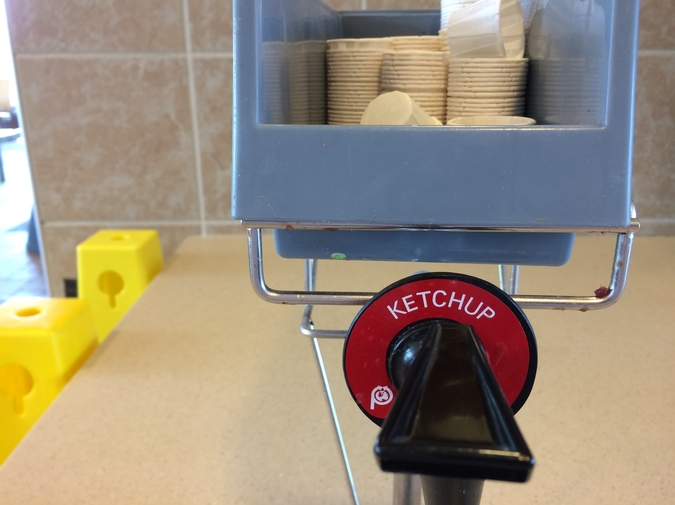 All My Flings Have Hated Dim Sum

And they’re missing out every time I order
a sampler platter of har gow, shumai, chrysanthemum

jelly, and the Chinese version of ravioli, because the Italians
stole all their recipes from East Asia, goddamn it, Marco Polo,

out the bones from my chicken’s feet bathing in porridge,
though my grandmother orders the same dish

every morning in Kowloon—and these men
can’t handle the truth that this isn’t Bizarre Foods for me,

and my father who’s given me everything, grew up
eating moldy bread as he looked out the window,

writing down the license plates of the cars that drove past,
and made a boat that floated out of cardboard

that sailed him to the U.S., or what about my mother
who only dreamed of dolls with glass eyes, and yogurt

in her fridge while her sisters saved up their coins
for the snack stand outside their family apartment?

All my mother ever wanted was a pair of Levi’s
light-washed, and red stockings for fancy nights,

your Chinese wet dream in a slit red slip and pink kimono,
I’m not your stuffed panda that dances when you poke

my button, though you say I have the softest skin in the world—
well, it’s sandpaper once I open my big fat mouth.

Triple Sonnet for My Crushes

They say that girls with daddy issues
go for much older men, but how much does
a father figure figure because for me
that’s only half true. O, I don’t get wet for
the Hot Dads of US Weekly or the dad
bods of Star, but give me Frank Sinatra’s
voice crooning in a Hong Kong cab, and I’m hooked
at four, because men’s voices matter more
than their faces, voices smoother than aged
bourbon, like hugging the Washington Monument
when you’re hungry for the All-American cock
that’s advertised as white, pointed, soaring
to the skies, ready to feed the world,
but it’s too big and greasy a hot dog.

Why do I lust for blond boys surfing, tanning,
fucking you on a rock, combing your hair
with their hands to give you a whole new world,
since all my flings have hated dim sum, but I hate
how they use a fork instead of chopsticks.
I guess that’s why people only die of love
in the movies, so save the drama,
the dozen roses delivered at her doorstep,
the heart-shaped pizzas that say “I love you.”
No, give me some ribs and fried dumplings
and enough words in your mouth that mean
something while I wear my tee that reads
“Please Touch Gently” because I’m a woman
and you can’t top my superpower.

No one in the world thinks Bing Crosby is hot,
except for me. In middle school I watched him
play Grace Kelly’s C.K. Dexter Haven,
also known as the most beautiful name
in the English language. But now I think
back to last weekend when I watched
'60s Brigid Bazlen as Salome
in King of Kings as she dances the Dance
of Seven Veils so her perv stepdad
will slice John’s head, deliver it on a tray
because she’s a young smokin’, sizzling
Liz Taylor oozing more sex than
that head oozes blood. Wow, now that’s
a woman, forget the cock, I want her.

My father tells me that successful men don’t worry
about getting married and the whole shebang of children,
the white picket fence, and the recreation
of Norman Rockwell every Thanksgiving and Christmas.
But I correct him, saying that successful women
don’t worry about that, either. It’s called charisma or Chemical X

or cat-like instinct—independence—the way a woman’s eyes
voodoo a man’s, not the other way around,
the way she stays an enigma, a puzzle of 2000 pieces,
hard to assemble and impossible to please—
certainly not a cheap date, and he parks the car at Caesar’s Palace,
says he’ll miss me when I move to Florida:

“I hope you’ll meet someone and maybe he’ll be rich
so you can stop writing, start a family.”
I roll my eyes as he tells me how to behave at “the one’s” house:
finish my whole bowl of rice, stay silent
during the entire meal, just let “the one” talk,
envelop my life. I’m too old for father-daughter outings,

even if they involve gambling and shopping. We walk in.
I let Dad play his blackjack, as I walk down
the avenue of Forum Shops, staring at the dark clouds
painted on the ceiling, the Roman statues above Fendi
and Poseidon and Pegasus posing with tourists,
and I think of how my father and I walked down this very row

when I was ten, how he wanted to go to a photo booth,
and superimpose our faces on Michelangelo’s pondering angels—
how the idea gave him a laugh that lasted until lunch
when we’d go to the MGM buffet and I’d stare at the photos of
Old Hollywood stars, and I’d still give anything to be famous.

Dorothy Chan's chapbook, Chinatown Sonnets is due out this May with New Delta Review. She was a 2014 finalist for the Ruth Lilly and Dorothy Sargent Rosenberg Poetry Fellowship and a 2017 finalist for the Lena-Miles Wever Todd Prize for Poetry from Pleiades Press. Her work has appeared or is forthcoming in Blackbird, Plume, The Journal, Spillway, Little Patuxent Review, and The McNeese Review. She is the Assistant Editor of The Southeast Review.