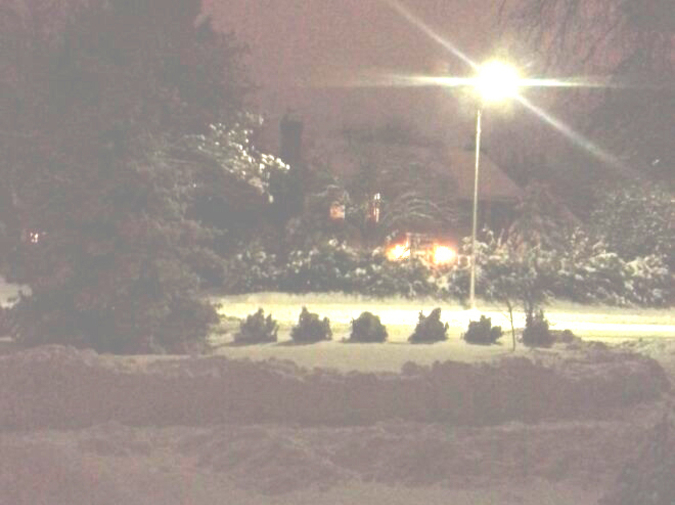 “At age 8, Flay asked for an Easy-Bake Oven for Christmas, despite his father's objections; his father thought that a G.I. Joe would be more gender-appropriate. He received both toys.”
-Wikipedia

When Bobby Flay cooks with garlic, he chortles
with gusto. He fingers the chorizo like he’s changing
the oil on his 2006 Toyota Corolla. His memories
don’t just last, they marinate. Every moment
of his life stewed over low heat for years; a broth
which keeps getting sweeter, the counterbalance
to his attitude, which has been known for being
salty as hell. Bobby’s hair isn't actually red.
It's strawberry blonde with a touch
of balsamic vinegar. In high school his friends
called him Bobby Fly because he got caught
with his zipper down at the bus stop.
When Bobby Flay looks at the camera, he looks
at your soul, your secret ingredient, the insides
of your cupboards, the depths of which are unknown.
In an interview by The New York Times, he told them
his favorite artist is Santana. How those rich solo’s
overtook his Corolla’s tiny stereo. How he drove
to the SouthWest with nothing but a quarter tank
of gas and a tablespoon of cayenne. When you eat
brunch with Bobby Flay, you’re not just getting a meal.
You’re getting an experience. Cooking isn’t just
his obsession, it’s his job. When Bobby Flay enters
Kitchen Stadium his job is on the line, but cooking
saved his life before, so yeah. He’s not that worried
about it. If his restaurants close, he’ll open another
one. If he’s out of paprika he’ll substitute with bourbon.
If he could be any animal he’d be a horse. A fucking
stud with New York swagger, his eyes sizzling
the shit out of your existence. If he could have
dinner with one person before he died, he’d pick
Rob Thomas. Ask him what it was like to work
with Santana, reach across the dinner table
in-between the candles and the Sweet’N Low,
hold Rob’s hand: so soft, so smooth.

and I am eating
all of the nachos

I mean all of them
even the olives

and someone asks
why'd you get nachos
if you don't like them?

and it turns out
this person's name
isn't even Kyle

and this bothers me
because why would I call someone
who doesn't look like a Kyle
Kyle?

and what kind of name
is Kyle anyway?

and why the fuck
did I eat all of the nachos
before the movie even started?

I mean, what kind of drive-in
would put olives on nachos?

and more importantly
why would I go to a drive-in
to see The Shawshank Redemption
when I own it on DVD?

and why do I own
The Shawshank Redemption on DVD
when I don't even own
a DVD Player?

and is it even worth it
to buy a DVD player
now that there's Blu-ray?

and Kyle says
I brought Starburst
from home and well,
I think the yellow ones
are the best

and I just have to ask
how does one even begin
to enjoy yellow Starburst?

is it possible
that there are others out there
just like him?

and if so
how many?

I need to know

and Kyle says
have you seen the director’s cut
of Shawshank Redemption?
it’s only available on Blu-ray

and I say
shut up Kyle

I’m trying to watch this movie

In the event that I die somewhat peacefully and my wish to be cremated is forgotten and instead I am buried with my cellphone in a cemetery near a McDonald’s so that I can continue using free wifi.

I wonder what it’s like after you die / like what happens to all your unused cell phone data / do you still have to pay for it / or does it ‘roll-over’ / like you can use that shit wherever you end up going / and wherever this place is / wherever you go / do you think that they have instagram there / how about t-mobile / are their prices still competitive / who are they competing against / what is the coverage like / what is considered international / or roaming / and how will I be charged for that / and what about my upgrade / can I still get the new iPhone / or do they only have Galaxies here / and maybe it’s just me / but that shit is confusing / like there are so many Galaxies out there / and I just don’t think I can handle that / at least / not right now / not on my own / so maybe I should ask Siri / maybe Siri knows / I hope you can still use Siri when you’re dead / but what does Siri want / how does Siri grieve / what does that look like / maybe the capacitors inside the phone start to sing / and push beyond their own emotional capacities / and they open the iTunes app / and play something sad / you know / something really sad / and maybe there are some resistors giving Siri problems / because that’s what bodies do / they betray you / and Siri is constantly fighting back against her corporeal form / and you see tears flood down your lcd screen / and it’s hard you know / hiding your emotions / when you’ve got this song / playing inside of you / and it’s just like yeah / what do you do with this / you know / nothing to do / except sit with it / as long as possible / until it passes / until we all pass on / and it reminds me / I’ve got this skymall gift card / for twenty five dollars / that my grandma gave me / for my birthday / when we went to visit her / in Las Vegas / and I think I knew then / there would be no better gift / than the gift card itself / so I kept it / and I remember thinking about using it / on the flight home / for one of those automatic kitty litter boxes / that looks like an end table / which you know / still smells like shit / regardless / but anyways / I didn’t buy it / instead / I kept the gift card in my desk / a keepsake / for a rainy day I suppose / and now it’s wasted / but whatever / you know / it’s fine / because when I think about it / I’ve always had problems with skymall / because it wasn’t an actual mall in the sky / like if it was actually a mall in the sky / I’d love it / I’d say take me there / take me to this skymall / show me your finest wares / I have this gift card to use / for whatever I want / well actually / for anything / that’s twenty five dollars / and maybe that’s enough /maybe that’s all you need / to shop here / and maybe that’s where you go / when you die / this skymall / this oasis in the clouds / where everything is on sale / and everything fits / the way it’s supposed to / and wouldn’t it be nice / if things fit / the way they were supposed to / wouldn’t that be something / worth dying for.