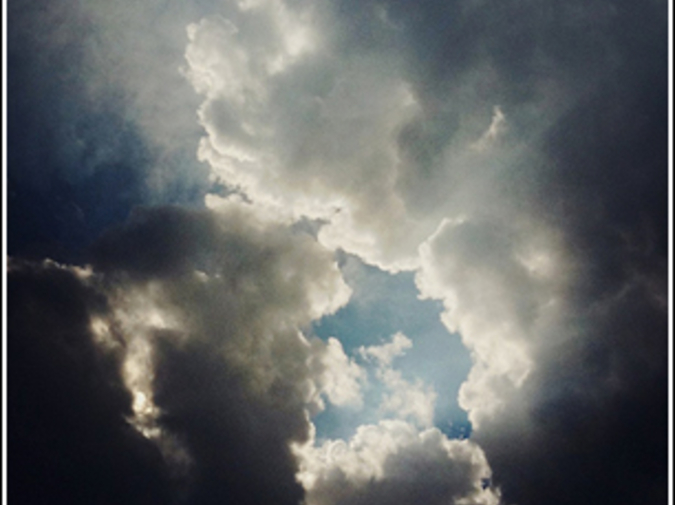 The sky burned down last week. The ground is still covered in the charred remains of clouds and bird feathers, black snow. The crisscrossing metal girders that once held up the sky are now readily visible—you can see straight through to the distant studs and laths of the universe. The Private Eye, best in town, sits in his office and watches the televised press conference. The fire chief says the fire started in the city, but assures the public they have no reason to suspect arson. The Private Eye finds this suspicious. The Private Eye receives a call from himself, who hires him to find the real cause of the fire. The Private Eye agrees to take the case, so long as he pays himself double the usual rate. This is a big case, after all.

When The Private Eye pulls up to the fire department, the chief is waiting for him. “I knew you’d come,” he says, and The Private Eye nods. The chief gives him the address of an old apartment building. The Private Eye warns that this information better be correct, or there’ll be hell to pay, but he doesn’t really mean it; he has already crossed the fire chief off the list of suspects. The fire chief and he are old friends, even though they don’t always agree on whether or not arson is a possibility. “The weather should be functioning again within a month,” the fire chief says. “That’s good news, right?” The Private Eye says nothing, gets into his car, and drives away.

The Private Eye arrives to find the apartment is only a skeleton of a building now, the wallpaper melted, the windows empty of glass. The Private Eye digs through the rubble, climbs up rickety stairs, and finds the body of a young girl, her skin like charred brick. Pieces of herself lie strewn across the floor: her heart, peeled to nothing; her voice, warped by heat; her memories, scattered everywhere, all of them burnt around the edges. The Private Eye finds one where she looks happy and puts it in his trench coat. For evidence.

He sees footprints in the ash, two sets. He follows them down the stairs and out the door. He takes out his giant magnifying glass and leans over so close to the ground, until the cracks in the sidewalks are canyons and the ants are giant canyon ants.

The first time The Private Eye used this particular magnifying glass, he frightened himself. He looked through the glass at one of his young sons, and his son, magnified, looked suddenly like a man, impossibly tall. For a second, The Private Eye was scared that he had missed his son’s whole childhood; his son had grown up sometime when he wasn’t looking. He put the magnifying glass down and, seeing the true size of his son, put away his case files. The Private Eye and his son played trains for the rest of the evening. Thinking of this now makes The Private Eye’s eyes cloud with tears, and the ants tell each other it looks like rain today. To The Private Eye, it doesn’t really look like anything.

The footprints lead him to a park where a man and a woman stand over a pond, weeping. Their tears fall into the water. The Private Eye taps the woman on the shoulder and asks her about the girl. “If we lived in a world that was only water, this never would’ve happened,” the woman says, hiccupping. “We are trying to flood the world.” The man does not stop crying.

“Did it start with a fever?” The Private Eye asks, and the woman nods: “She was convinced her body was a building on fire. She took herself apart to rescue anyone who might’ve been trapped inside. The fire spread.” The man, the girl’s father, cries harder. The Private Eye remembers what it is like, trying to flood the world.

“You should always listen when your children tell you they feel feverish,” the Private Eye says, and gives the man his daughter’s memory. Sometimes, the Private Eye pretends he is a robot and he is able to calculate everything logically and normal criminal weapons and insults don’t hurt him. But even robots hurt when they miss the people they love. The Robotic Private Eye holds back tears, certain they will mess with his circuitry, spark a fire even. “I wish I were a mermaid,” says the girl’s father, submerging his head, and when he surfaces: “I wish I were a submarine.”

That night, The Private Eye gathers the suspects in the parlor. All the usual villains are there, seated in the red satin sofas: the pyromaniac mobster Cigarro; the circus fire-breather; Cinder and Ella, twin princess arsonists; the crane operator. “I have solved the Case of the Burned-Down Sky,” the Private Eye proclaims. The suspects squirm and murmur, eyes shifting sideways. The Private Eye tells them about the parents who allowed their daughter to be consumed by fevers, and the criminals shake their heads disapprovingly. The Private Eye thanks them for coming, shaking their hands as they leave.

With another case solved, The Private Eye drives home. He stops by the cemetery on his way. The Private Eye lost his family in a house fire many years ago. The police determined there was no foul play, but The Private Eye was sure it was arson. He hired himself then, too, to track down the arsonist. He had dug through the smoldering remains of the house. He followed his wife’s family. He even tailed himself, and found out some pretty rotten things, but nothing implicating him in the arson. Tonight he digs up the graves of his wife and kids, two young boys, he named both after his father, and they tell him what it’s like to be dead. As they sit in the soil, looking at the towering cranes that have halted their reconstruction for the night, he wonders if the sky will ever look the same again. He cries on his wife’s singed shoulder. She winces, but she understands: being alive is hard, that is something she remembers about life. After he has kissed his family goodbye and reburied them just as they were, he wipes his eyes and drives home, knowing that tomorrow, there will be more mysteries to investigate, more invisible arsonists to catch, more fevers growing into fire. He follows himself home, just in case.

Sam Martone grew up in Tuscaloosa, Alabama, and currently attends Knox College in Galesburg, Illinois, where he acts as a private investigator on the weekends. No dame ever hires him to find her husband, no figurines of falcons are stolen. Instead, people tell him of the strange things they have seen: steam rising from beneath the grass, plastic flamingos appearing outside fraternity houses, a midwest sky teeming with hot air balloons. Mysteries that even Sam Martone cannot solve.