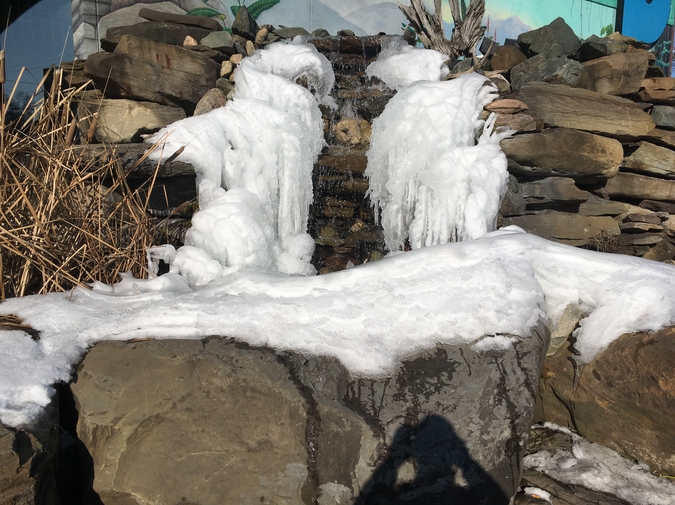 Clark says that trying to save the mussels is dumb because there are so many of them. That’s his logic. The town says they have to repair the dam in the lake, or the houses down the way will flood soon. They lowered the water level, and all these mussels were left to dry out and die. So I come out behind the house alone to gather them up from the newly exposed lakebed to throw them back in the deeper water. The thing is, more often than not, the mussels squeak when you pick them up. It’s like they know the danger they’re in, and they’re letting you know they appreciate you took the time.

I’m interested in nature and animals and stuff like that. I saw a show on these buffalo once and it turns out they decide where they’re going to go by voting. But only the female buffalo are allowed to vote. When I told Clark, he spit out his Fanta, tiny orange bubbles fizzing at the corners of his mouth.

“You gotta be shitting me. The crap you believe,” he said, shaking his head, smiling.

“They got polling booths out there in the jungle?”

“They don’t live in the jungle, and no, they vote by looking a certain way.”

I ride my bike up to the house. My dad’s likely at work, and Clark’s probably inside playing video games. His mom sits in the rocking chair out on the deck.

“Where you been?” she hollers over to me.

“Your dad’s bringing a ham home for dinner.”

I head down to the lakebed with my dad’s galvanized bucket, and start gathering up the mussels. Some of them have tried so hard to reach the water, you can see the trail they made. I don’t really understand how something that looks and feels and pretty much acts like a stone can move itself along, but that’s okay. It’s good to have things you want to look up and learn.

“Hey, I’ve got an idea,” Clark says, coming up beside me on the sand. “That bucket of mussels, we should cook ‘em up and eat ‘em.”

I shake my head. “You have to be careful that the ones you eat are alive.”

Clark looks at me, holds out his hand as if he’s stopping traffic. “Wait.” A grin spreads across his wide freckled face. “You’re telling me you’re spending all your time saving mussels that are dead?” He tips his head back and guffaws, mouth so wide that I can see the hole his last step-dad made when he clocked him and smashed out two teeth. It’s the kind of belly laugh that makes you start giggling a little when you see it, even if you’re the butt of the joke.

“What are you laughing at Clark Jones?” Clark’s mom Dee yells over to us.

“Nothing, Ma,” says Clark, recovering himself.

The thing about Clark’s mom Dee is that she’s okay. She might not fit in with the women in town who want to get together and talk about books or whose husband is creeping around with who, but I think she’s something a lot of moms aren’t. My mom left when I was little, went off to lead a different kind of life, Dad said. But Clark’s mom Dee, she’s always been all about him. And when that last step-dad of his got so drunk he knocked Clark into the next week, she sure as shit scooped Clark up and left the very next day. That takes some doing when you don’t have a job.

“You want to hear them squeak?” I say.

Clark looks at me, tilts his head.

“Come here,” I say. “Lean down. When I pick them up, they usually let out a squeak.”

Clark looks at me like he’s worried I’m having him on. But he leans down anyway, and I pick up a large mussel. No sound. I pick up another, and there it is, the squeak.

“No fucking way!” Clark starts picking up mussels to hear them. He tries to pick up two at once and have them squeak at the same time.

“How come they only squeak one time?” He asks as he puts a few more in the bucket.

“I guess that’s all they’ve got to say.”

I don’t know yet that the maple ham my dad will bring home later will be so good that all four of us will say it’s the best ham we ever had. I don’t know yet that tomorrow Clark will ride out towards the park on his bike and he won’t see the vehicle that hits him and drives off, leaving him dead in the street by our house for his mom to find. I don’t know yet that after the funeral his mom will sit in that rocking chair looking east, and that a few days later she’ll head out that way and I won’t see her again either. I don’t know any of this as I sit on the lakebed saving as many mussels as I can.