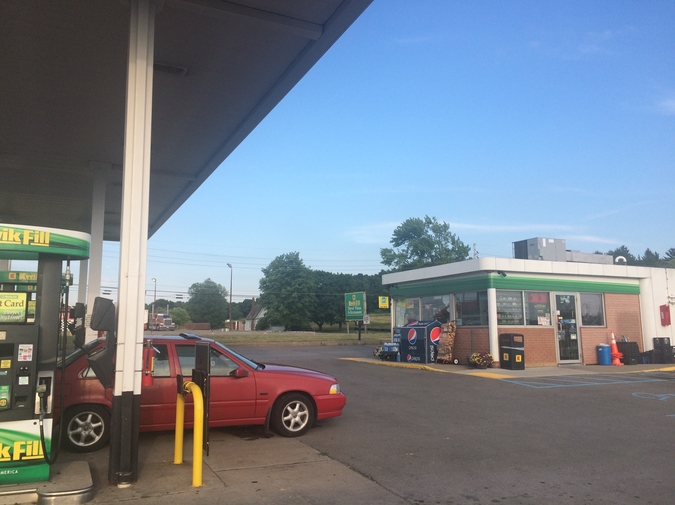 Out on the edge of the parking lot, where it meets the road, Google Street View caught me in the midst of an offense.

To be fair, this was the same morning a homing pigeon had dropped out of the sky and into the husk of seagrass in my backyard. A message unfurled from its right leg as it shuddered away a life beside my slippered feet.

I thought, this is the cause of all our trouble.

I thought, this message probably killed its messenger, strung out on finding its way home. What kind of home it must have been.

I had to leave the pigeon where it was without a proper ceremony or I would’ve been late to work. Like I wasn’t even heeding its cautionary tale whatsoever.

Nobody’d seen what went down when I actually showed up to work, hunkered and sinister between the company’s allocated spaces, so I thought I was in the clear. Encumbered only by remorse, I settled in and trawled my desk drawers for emergency chocolate.

And yet here I sit, weeks afterward, across from Janine of all people, in the only barren office, waiting to hear how much she already knows.

“Here it comes,” I accidentally say out loud.

I could say I had no idea what I was doing that day, that I was utterly confounded, stuck in a morning haze or struck by an external zomboid force too powerful to shake off. But glancing at that screenshot she had taken the liberty of printing out, I look like a person who knows exactly what she is doing.

Janine is scratching her head and I’m scratching my head and I don’t know who started it, who’s mimicking who.

I never learned how to moonwalk but right now I wish Michael Jackson’s ghost would float in and show me how to glide gracefully back in time. But he doesn’t appear so I look for more papers underneath the screenshot, perhaps filled with exculpatory testaments to my pristine employee record. There’s just that one sheet on the table, though.

Janine’s not speaking and I remember she’s watched a lot of those CSI series, the ones that have aired so long they need colons with extra acronyms beside them to tell them apart.

“Sure, he ratted me out for leaving at 4:45 a few Fridays ago but I’ve looked past that. This isn’t about that.”

I am now wading in her embarrassment for me.

“Tate loves to snowboard. His custom license plate says so,” she taps the picture, “You knew that.”

Angie from IT’s face looms in the door crack. Her expression could be interpreted as having eavesdropped on the entire conversation.

The taste of my own medicine is broth-like. It is a base for something much richer. It knows its place and strives for slightly blander still.

Sure, you, the victim, are technically my subordinate. But it really only worked out that way on paper. You are younger yet more mature. You have what can only be described as poise, a word I understand in the abstract but can never manage to pull down into self-application.

Before you came on board, we were unified in our quiet sterility. The overhead lights left us overexposed and stupefied into slothlike submission. In other words, we were always finding new ways to let our work curdle. We were proud that a company as small as ours had an entire floor to itself in a mid-century office park too far back from the main drag to get a good look at.

And then people started clotting around your desk, not even on our end of the hallway to see you. Everyone took to you within the week. You initiated Capture the Flag nights on Tuesdays. You convinced Bill to try squid at the holiday party. Before I knew what had happened I’d gone through my senior solo dance routine from high school for you in our galley kitchen.

You told me that secret about Lauren I’d never heard despite the fact that Lauren and I are a two-person department. I dog-sat for her and made her mother a casserole when they had a death in the family.

You watch movies on your computer in segments throughout the day and when you noticed that I noticed you laughed and said, “Computers,” while shaking your head like that would fix it. I didn’t respond so maybe that did fix it.

I guess what I’m most repulsed by is my own interest. And that repulsion led me to do what I did, which was dump Bill’s cologne down through your open sunroof until it puddled up on your bucket seats and seethed in your power window buttons.

And as Janine pulls on the door handle of her makeshift interrogation room precisely the same way she pulls on the basement vending machine to release her Snackwell’s Vanilla Creme Sandwich Cookies, I think that maybe I have learned from this experience. How maybe we’re not as invisible as we think we are, if nothing else.

Instead of going directly back to my desk I meander to the supply closet and check the shelf with the lost and found bin. I pocket the TI-83 calculator circa 2002 to relieve the pressure of the situation and leave the pamphlet about hand, foot, and mouth disease behind.

The HR report will be there or not there on Monday. This report will eventually make its way into the filing cabinets that are never opened, or it won’t make it there at all.

Claire Hopple has three books: TELL ME HOW YOU REALLY FEEL (Maudlin House, 2020), TIRED PEOPLE SEEING AMERICA (Dostoevsky Wannabe, 2019), and TOO MUCH OF THE WRONG THING (Truth Serum Press, 2017). More at clairehopple.com.