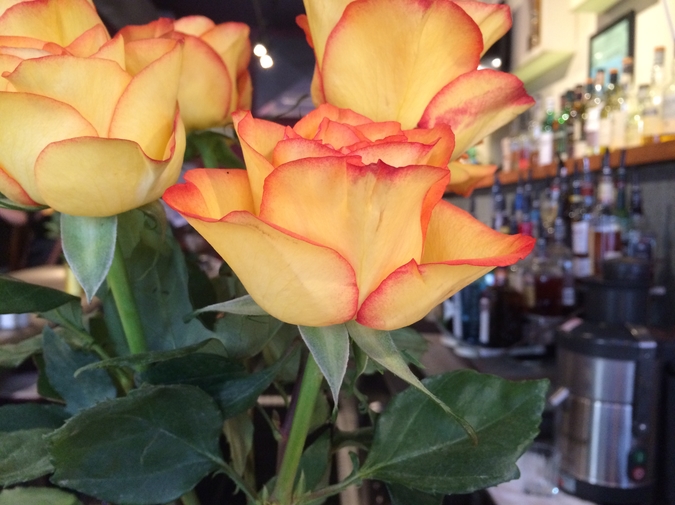 It usually happens after dessert, when my sister is scraping the birthday cake frosting into the garbage or covering the holiday pie with foil. The men in my family are slouched in their seats and talking about the price of wood or how you can get an entire bag of shellfish at Costco and wouldn’t you know it’s actually pretty high quality. My mom is loading mugs ringed with milk and coffee into the dishwasher and is making a face for me to come help.

I never want to do dishes though, and lucky for me that’s when they come shuffling over and cup their tiny hands to my ear. One of them makes circular motions around her face and the other whispers,

“Can we do your makeup?”

“Sure,” I say and they giggle wildly and I think about how I agree to things too readily.

And so I leave the pastry-crusted forks, and no one minds now because I should watch the children. I should contribute. Mind the store a bit. Give everybody a break.

By the time I get to the bathroom, they’ve already dumped a bunch of brushes into the sink.

The eldest points at the toilet and tells me I can sit there.

“Whose stuff are you using?” I ask.

Putting on the lipstick is their favorite part. Sometimes they forget about me and just start doing their own.

“I thought I was getting the makeover?” I say.

They balance on their stomachs on the counter with their feet teetering above the floor; they lean as close to the mirror as possible; they make small O’s with their mouths and gently color them in.

My mom is always saying that well-done makeup means no one can tell you’re wearing any, but my nieces don’t believe that. They firmly believe that you should be able to see the outcome of their work, that your face should serve as a record that something happened.

Whenever they beg to do this, I try to limit the tools they can use: my least favorite blush, the eyeshadow palette with the blue and green already mixed together, lip liner that’s been ground to a stub. But they inevitably find the whole bag with the good stuff—the red MAC lipstick all the magazines are raving about, liquid black eyeliner, twenty dollar waterproof mascara.

The youngest presses her palm against my forehead to steady herself. She smears lipstick over my top lip and hits my nose. She cups her mouth to cover a laugh.

The other one lunges at me from the side, pummeling blush into my cheek until we’re coated in pink mist. I look like I’ve been slapped repeatedly.

“This isn’t how Vogue recommends doing it,” I say.

“Never heard of her,” says the eldest, pounding a brush into a pot of glitter.

“Do you have anything darker?” she asks.

“Use it in moderation,” I say.

She picks up the eyelash curler.

They put eyeshadow on my eyebrow.

“Shhhhh,” they whisper. “It doesn’t have to be perfect.”

My instinct is to flinch but sometimes instincts are reckless.

A guy I work with once told me he likes natural women. He said I’d look more beautiful if I took all that junk off my eyes. I remember how I had to bite the inside of my cheek to stay calm.

“It looks like I have a black eye,” I tell them.

“It still looks great,” one says.

“Can you just, like, go like this?” she asks as she sucks her lips in over her teeth. I feel like I don’t need more lip liner, but who’s to say.

“Are you almost done?”

Before I can give warnings or general guidelines for best practice they’ve scattered all the hairbrushes across the floor. They flank me with one round brush and one flat. They’ve divided my hair between them. I’m starting to sweat.

“Don’t get it all twisted up in my hair like last time,” I tell them.

When the girls are done, they hold up a mirror so I can see. They squeal and clap their hands together. I promise not to take it off for at least fifteen minutes. Sometimes you have to honor creativity.

Janelle Greco resides in Brooklyn but will often escape to the far reaches of Long Island to be with family, watch sea waves, go digging for clams, and let her nieces give her a "makeover." She was also recently a finalist for the Center for Women Writers Award in Creative Non-Fiction. She is currently working on a collection of bios based on her years spent as a teacher and manager for homeless and formerly incarcerated men in several NYC shelters.