The House in the Desert 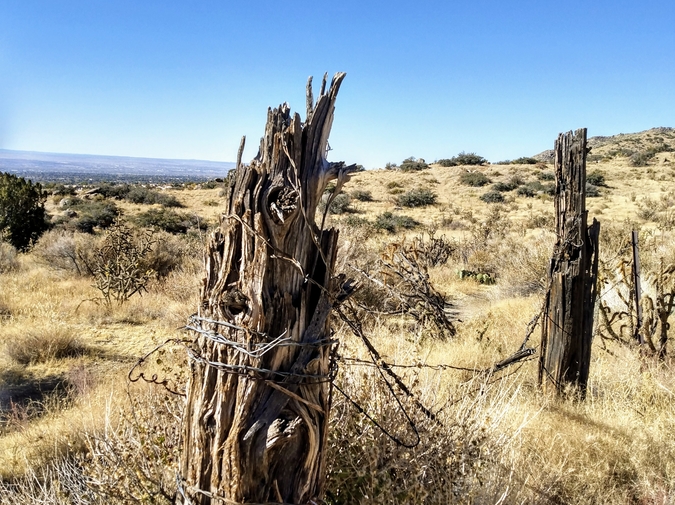 When the house was built, it was all desert here. Now, the house is flanked by a Best Western and an office building, and traffic noise from the intersection cuts across the dry gulch. There is a mesquite tree, a palo verde, and several olive trees out front. Cracked brickwork has collected years of dust and debris around the two palm trees that rattle in the wind. A prickly pear cottoned with cochineal bugs lolls by the weary wooden fence which is propped up with stones. Mountains block the horizon giving the illusion that we’re at the city’s edge, but the mountains are really just islands. The little patch of desert that surrounds the house is an island too. The animals here are unruly: Gila Woodpeckers drink deeply from the hummingbird feeder. Javelinas eat from the compost pile and Mourning Doves nest in the carport. Every few days, a packrat who lives in the garage climbs up our windowsill to sip from the birdbath.

The first time I stay alone in the house, I walk the empty lot behind it gathering creosote to make a salve. I say empty, but that is only out of convention. The lot is full with creosote, brittlebush, and palo verde, and I can only tell there was once a neighboring house here by evidence of the smaller, younger plants growing up in its footprint. I only collect the bright green tips from the creosote; the new growth, shiny with resin. I move from bush to bush, careful not to take too much from one plant. Careful, despite knowing that at Yucca Flat, Nevada, twenty-one creosote plants were leveled during atomic testing in 1962 and all but one regrew. I am trying to make a home here. Creosote usually propagates by seed, but they also clone themselves; as the oldest inner stems die off, new stems establish along the periphery, growing outward in ever-expanding rings. Left to their own devices, these covertly cloned assemblies can live thousands of years. When I have filled the stainless steel bowl with their tips, I strip the tiny pointed leaves until my fingertips are tar-black. That night I sleep under a blanket of bruised leaves and oil melding into the smell of the desert after a hard rain—the kind of rain when every root in the packed dirt relaxes and unravels in the blossoming soil.

When the desert heats up, its creatures look for cooler climes. The house is old and unsealed. We try our best to jam, nail, tape it up, but it’s no good. Word spreads. A baby lizard greets us from the kitchen sink. Crickets serenade us in the living room each evening. Moths faithfully gnaw our sweaters. (I try not to think about the centipede.) The cockroaches can’t wait to crowd in. They spiral up from the septic tank and pool into the relative coolness. I find them hunkered under the cutting board, tucked inside the toilet paper roll, keeled over in the empty french press, tickling their antennae out the drain slot as I brush my teeth.

I try to be serene. I place water glasses over them, slice sheets of paper under the rim, and deposit them outside. Only occasionally, when one bursts from the folds of the shower curtain, do I break up their house party with the old beaten swatter. We tell the cat to do his part and he lets a lizard go inside the recliner.

It’s fine, I tell myself, watching a scorpion wheeling around the track of our dinner plates. Not all species are that venomous; ours are probably fine. But no, I quickly discover we house the most venomous scorpion in North America. The article assures me that death is extremely rare then lists a series of alarming symptoms and an enthusiastic note about what great climbers they are! Still, it’s not until I’m on the toilet and notice a scorpion drunkenly beelining it for my bare feet that I finally accept it: this house is not ours.

I find a photo album from the house’s first inhabitants—my partner’s great aunt and uncle. There are photos of the house in its infancy, under construction with all its undergarments showing, but in just a few pages, it’s all tucked in and tidy with squared-off shrubs and a trim green lawn. I keep turning the pages and the months between Christmas feasts are condensed to a quarter-inch of photo sheets. It is lived in. Tomato plants rise from the ground and turn to fruit. A dog sitting on a lap transfigures into old age and, eventually, into a new puppy. Toned muscles and bikinis turn to oxygen tanks. In each photo, I see things I recognize: a bench, a birdhouse, a basket. The house is filled with artifacts from someone else’s past.

My partner and I make our offerings: we keep the birdbath full, put half-oranges in the mesquite tree for the Verdins, and cook nectar for the hummingbirds and woodpeckers. We sweep the flagstone and think it looks pretty nice, even though I suspect the coyotes will be laughing tonight about how long that will last. I turn the compost pile and daydream about vegetable gardens and the refrigerator door fills with Christmas cards. Sometimes I feel like the house is watching me, like it knows I am only passing through. When the creosote tries to join hands across the driveway, I trim it back and place the branches in a jar of water in the bedroom. At night, the hum of the crickets start up from the other room and we fall asleep, over and over, in the blurred space between indoors and out, between our world and theirs, between illusion and dream.

Nell Smith is a multigenre writer and field biologist living in Arizona. Originally from Maine, her writing has appeared in Essay Daily, Minding Nature, Entropy, Thin Air Magazine, and elsewhere. She recently completed her MFA in Creative Writing and Environment & Natural Resources at the University of Wyoming.