The God I Pray To 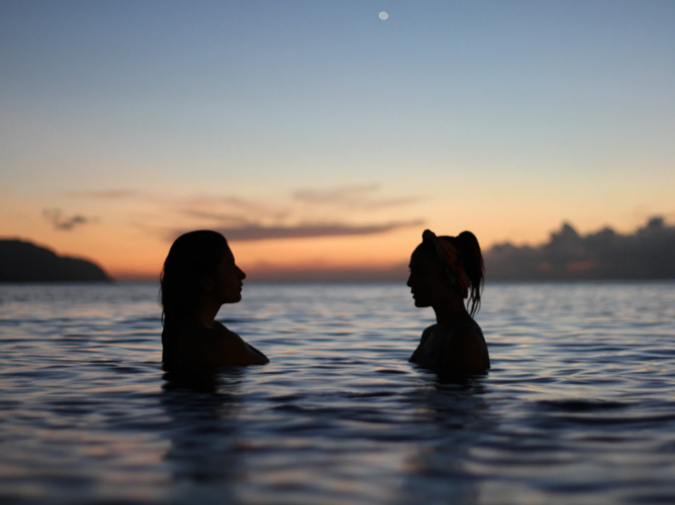 Momma always told me I’d meet the man God had planned for me, but those boys play hopscotch on me, use my body as their concrete, skip stones and stomp where they please. When she calls, Momma asks about Beau still. Beau’s the kind of guy who wears a True Love Waits ring but believes in flexibility, that metal band forever cold whenever his palm rested on my thigh, crept up. A ring so unlike the flower ones Maddy and I made for our pretend wedding, the stems bending to make room around us. We kissed each other’s cheeks under the slide during recess, hand on hand, whispering, I will never leave you or forsake you.

Near the end of our talks, our endless looping, Momma stops asking about Beau, stops asking about boys in a way that makes me think she knows, or always knew, and asks instead how I’m doing in my walk with God—if I pray often, if I know Him still. I say Yes, Momma, and it isn’t a lie.

Because Yes, Momma, I know God. I curled up with her on a cold beach at two in the morning and we wrapped ourselves in a white bedsheet, the only covering in my car that could ward off sharp October wind. God grabbed one edge of the sheet, and I the other. We rolled inward until the space between us disappeared, our arms acting as bridges from one body to the other. God pulled the sheet over our heads as she told me about the box of sex toys under her bed, and I crunched grains of sand each time I clenched my jaw.

Yes, God said. It’s cold and I want to stay.

So I told God how I doubted too much these days, doubted her in front of me even as my hand rested on her side. God moved close, asked if I was afraid. I thought of Beau and hopscotch games, of playground weddings and how the God my Momma prayed to was not the one before me, and I said, Yes, I am afraid of my own body. Of the power it does and doesn’t hold. Yes, I am afraid of pain and the promise of it, always. Yes, I am afraid of what this world holds and how much of it lives in me. Yes, I am so incredibly afraid of meaning something to someone. Yes, I know arms are for keeping people at a distance, or at no distance at all.

We pulled the bedsheet to our chins and watched clouds cover stars. I asked if she could clear the sky, make this October bright again. But God said, That’s not how it works, and then she asked to kiss me.

Tyler Anne Whichard is an MFA fiction candidate at UNCW. She previously interned with UNCW's small press Lookout Books and currently reads for Ecotone, a literary magazine that reimagines place. She was a co-founder of semicolon literary journal. Tyler Anne won Blue Earth Review's 2019 Flash Fiction contest, and her work has appeared in Memoir Mixtapes and Spelk, among others. Follow her on social media @tylerawhichard.