The Epic Poetry of the Hundred Pines Mall in Nashua, New Hampshire 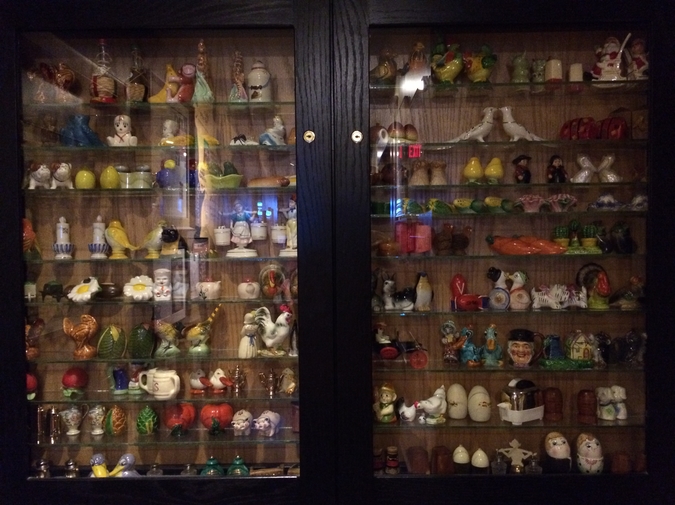 Because of a few weeks folding scratchy polo shirts three Christmases ago, I know where the blank door off the hallway to the break room goes; I know that there are no deliveries from the warehouse after four on Sundays.

In a corner of the dark loading dock there is a box the size of a small car full of pillows wrapped in plastic. Getting in there is Katie’s idea. Then the lights snap on and two Susans come in chirping about a missing rack of juniors’, unzipping sleeved racks all around us. We are buried and silent and I can’t bear to stop Katie from touching me, and she doesn’t stop.

Katie is salamanders, and wet fire. She drives too fast.

In a dark hall half an hour after the last sound, I hold Katie’s cool thin hand behind me, pressed against the base of my spine, as we inch forward, my other hand flat against the wall I can’t see.

“We’re about to descend into the underworld,” I say.

“What’s the point of moving to New York?” I say again. “Everything is here.”

“You could come with me,” she says.

“Why don’t you use your flashlight?” she says. I turn to her in the dark, her hand in mine still, her knuckles pressed below my belly button. I want her so much even when she’s inches away I know what it feels like to believe it is possible for a statue to come to life.

“This isn’t like that elevator in the library,” she says. “I’m here to shop.”

“We shouldn’t actually steal anything,” I say.

“You care about JCPenney?”

“You wouldn’t believe what gets alarmed,” I say. “The manager was crazy about shoplifting. If you wanted to look at a handbag you had to call, like, the KeyMaster.”

My flashlight is green, metal, the size and shape of the barrel of a gun. It makes real circles of light on walls, not warped approximations. I don’t want to turn the flashlight on because it’s like switching off the ghosts, but I turn it on. Above us there’s one square of ceiling tile missing, a red wire crossing the space. A good reminder: what seems to be the ceiling is not the real ceiling. We live our lives surrounded by what we cannot see. There is so much so near to us each moment.

JCPenney is in our mall. In the thinly-threaded beginnings of my memory, there is uncleared ditchy puddled land where the mall is. I have a two-year degree and some certifications and now I work odd hours in database management from my apartment while I listen to Bach or the police scanner or Bach and the police scanner. Katie finished her degree in Psychology last year and has been hostessing at the On the Border that’s where the Olive Garden used to be. She can understand French if she listens to it twice. In high school English she called me by someone else’s name. Last week her cousin’s roommate in Brooklyn went into a mental hospital, so there was a room waiting for her in the city, and she wouldn’t even need to come up with the security deposit.

We emerge into the catalog department. Along the opposite wall is the hair salon, leather chairs on silver columns like hovering sleeping giant pink lizards. Katie ventures in, twirls a chair.

“Sometimes I got to take out their trash,” I said. “These giant garbage bags full of hair.”

The optical shop is closed off by a grate. Inside, shelves of eyeglasses are faces with their eyes closed.

“I wasn’t expecting this to feel so much like a graveyard,” says Katie.

First floor is Home Store and Children’s. In my pocket I’ve got a packed bowl and three glowsticks. Armless children perch atop tables, watching us with all-white eyes. There’s a table of kids’ Patriots T-shirts, twelve stacks of exactly six perfectly folded T-shirts each. On the wall, Red Sox caps are strung together by a cable, like they are birds about to fly away.

Then Katie’s gone. I can’t pick her out with the flashlight. I call her name. I call her name again and I sound scared. Then a whirring buzz from the darkness. I find it with the light—back near Toddler there’s a random shelf of that laughing Elmo from last Christmas and Katie’s pushed a bunch of their bellies at once and they are shivering with red robot glee. I stay where I am until it stops. I call her name again.

I find her cross-legged on the floor between racks of onesies, a plush long-eared golden hare across her lap.

We smoke the bowl crammed together on a kids’ changing room bench. I manage to convince Katie to take off the white straw Easter hat. It’s so dark the only light is the crinkling fingernail of fire.

“I could stay here forever,” I say.

“What do fireworks look like from the inside?” says Katie. “If you were in a helicopter right in the center of it. That’s what I want.”

If I had been more alert, maybe I could have held onto her before she slipped out to the other dark. I hear her footsteps gliding away into Home. When I catch up she is zipping an armful of Elmos into a flowered rolling suitcase.

“That’ll set off the alarms when it gets bought,” I say.

“It’ll be a surprise,” says Katie.

I feel like fucking around with the silverware but Katie goes right by it, toward the escalator. When an escalator is not running it’s teeth in an open mouth. Katie starts up the down. I grab her hand. “There’s more down here,” I say. She shakes off my hand. So we go up the down, cross the intersection in the escalator X and climb the rest of the way up on the up.

“You know,” she says, “you are going to die eventually whether you stay here or not.”

On the second floor there is twilight because of leaked in moon from skylights. It’s not as graveyard, more like it’s about to be morning, though that’s still hours off.

We help mannequins to pleasantly offer surprising items to tomorrow’s shoppers. A tie covered in tiny orange fish. A nightgown. Another mannequin’s hand.

In swimwear, we find a spiral notebook next to a register. On the first page, one word on the top line, in pencil: “Violet.” The rest of the notebook is blank.

“You know how to open these?” says Katie, pressing a 7.

“All the cash tills are in the safe,” I say. “And no. I thought we weren’t here to steal anything.”

“Not really. I’ve been in this store a million times.”

“But not when it’s like this, right? It’s a metamorphosis. I mean, there’s something incredible everywhere,” I say. “The whole Battle of Troy, that all happened in an area not even as big as, like, Rhode Island.”

“You think living in this town is the same as being in the Illiad? That’s what you’re thinking about? Is this like how you wanted me to be a swan for Halloween?” she says.

“No,” I say, thinking of her bare wrists in the cold that night.

“His whole crew died. All of them. He’s the only one who lived.”

“Everything is here,” I say. “I’m here. You’re here.” I look up at three stuffed seagulls suspended from the ceiling by transparent wire, floating in the no breeze. “It’s beautiful.”

Here’s what I love about where I live: the white steeple of the church I do not go to anymore. The taste of pine needles. The manager at Target who has two holsters exclusively for scissors on her belt. Getting home with a hot pizza after driving through sleet. Chipmunks. Stone walls. Looking up through holes in the forest to sky. Sappy hands and stars. The rumpled horizon of mountains. The orchard on the side of the dark hill. The crumbling twist of road where my dad taught me to drive. Old people in the library. The weight of a shovelful of wet snow. The mall at Christmastime.

Moving to New York City would be trying to be a character in someone else’s story.

The back room for shoes smells like shoes. It’s like being in a sleeping honeycomb. Then I follow Katie around the corner into the store itself again. Shoes rest on clear plastic display stands, open mouthed. Katie sits on a bench, slips on two gray spikes, gazes at her feet in the low mirror’s shadows.

When she stands she totters at first, foal-like, before metamorphosing into herself. She dreams to the grate separating JCPenney from the mall’s interior. I have a flash that it’s electrified but before I can say anything she rests her fingers through it. She looks out across the hollows of the mall canyon, toward where Orange Julius used to be.

We wander into perfume.

She slips out of the shoes and rests them gently, flowers on a coffin, atop the glass surface of a jewelry case. She looks down into the lake of it.

“They lock up most of the expensive stuff in the safe at night,” I say.

“Those are still out,” she says, following her fingers to the next case—an array of plain long silver and gold necklaces in open velvet boxes. She slips around behind the case.

“Don’t touch anything,” I say.

“What are you worried about?” she says, slots open the cabinet from the back and she’s already dangling one silver necklace between her fingers like a sparkling worm when the alarm goes.

Katie looks to me, afraid for the first time in our several months.

“No way we’re on cameras,” I say through the noise. I dig out my car keys and hold them to her. “Someone’s here soon. Go back to the pillows. They’ll pick me up and chase me out and we’ll be gone in an hour.”

“But you’ll get arrested.”

“Maybe, but whatever. It’s not like I stole anything.”

She holds out the silver necklace to me, and I wave it away. She pours it into the front pocket of her jeans, takes my keys.

“Use the stairs,” I say, pointing, and she goes.

It was always going to be this way. I’m like Orpheus. Even at the beginning of his quest he knew he was going to have to watch Eurydice leave him forever.

Katie lets her fingertips trail through a rack of silk dresses and shivers the ghosts and she turns around to look back at me for just a moment and I’m not Orpheus at all. I’m Eurydice. I’m the dead one who walked up from the center of the earth close enough to the surface to see the daylight in the distance.

And I’m a knucklehead with three uncracked glowsticks in his pocket who decided to screw around alone in the JCPenney in the middle of the night for no reason. I don’t know why I came in here, officer, I swear. I just wanted to see if I could do it. I wanted to look around. It’s stupid, I know. I’m sorry. It’s stupid. It’s nothing. It’s nothing at all.

Rob Roensch's collection of stories, The Wildflowers of Baltimore, is out from Salt. He has published fiction recently in American Short Fiction, Vol. 1 Brooklyn, and Green Mountains Review.