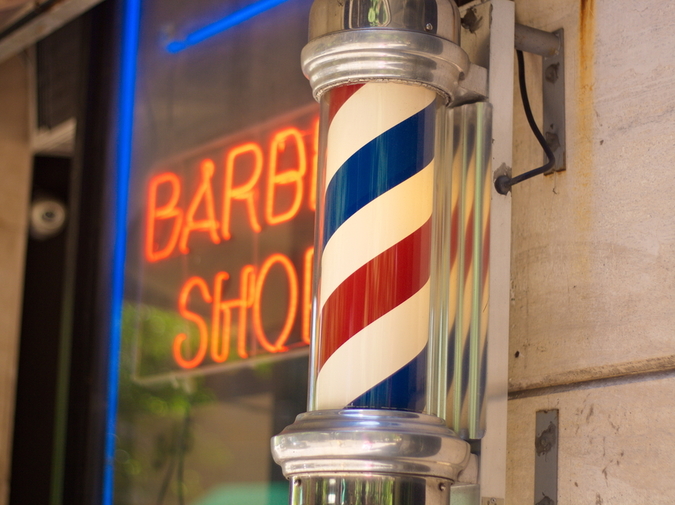 Jane was walking past the barbershop on the way from the subway station to her apartment. The shop door was wide open and the place was packed. Music thumped into the street. She rarely slowed to look through the doorway or window of any business unless a legitimate transaction needed to occur but she peered in—the air had finally warmed and spiraled around with a recreational quality—and her eyes met those of a good-looking man. He stood behind a chair holding a pair of scissors about to trim the back of another man’s head. They only glimpsed each other for an instant because Jane quickly turned her head and was past the shop in a few steps.

The barber was tall, dark, and handsome—typical fascinations—but his tall, and his dark, and his handsome were atypical. That night Jane lay in bed and imagined him in her room, standing like a barber does. She could not pinpoint what about him had spellbound her. She decided she would get a haircut from this man and gather information—the last film he’d enjoyed, his favorite song, anything—so she could rid him promptly from her mind. She learned from a previous relationship that an unforgettable man can only be eradicated with details.

The following evening Jane made her way to the barbershop. The handsome man was there and his chair empty. He was twice as cute as she remembered, particularly amidst the loud bass. His black hair was cut close to his scalp and his jaw clean-shaven like a man equipped for fierce action. He had muscles that reminded her of a park she used to visit with her grandparents when she was little—a gray square with a hungry flock of pigeons. They’d feed the birds bread and his muscles were the gutsy sensation of being surrounded by a large pulse of animals. His eyes were cavaliers in a grim fable and she imagined people were constantly trying to mind-control them, to make them lock with their own.

She pointed at the handsome man’s chair and said, “Are you open?”

“For you, yes,” he said, and patted the leather back.

His voice was the sound of—spreadable thunder, Jane thought. She sat down. She wore a loose white shirt, midnight blue leggings and motley sneakers the colors of a canyon. She twirled a ruby teardrop on a gold chain that hit just below her collarbone. She had a sensitive look about her, no blemishes on her face. In the reflection of his mirror she thought she looked like a person who knew what colors went with what. She couldn’t see much of herself beyond that and hoped he couldn’t either. She didn’t want him to know she had just been dumped by her fiancé. Or that she was a dog trainer with no dog. Or that she had always wanted to be a surfer girl but was too faint of heart.

She said, “I just want a trim. Half an inch,” and he set to work without even washing her hair.

He made no attempt at conversation like the hairdressers at trendy salons. Every so often he pulled down chunks of her hair against her cheeks and inspected their length in the mirror. One of these times he locked eyes with her and squinted gravely like a detective, as if on her face he had found a clue. She had recently watched a film about aliens who moved to Earth and stole the jobs of humans. The majority of humans became homeless. The aliens had extreme difficulty with nonverbal communication. They parked their luxury cars in the shadows of run-down buildings and said to the homeless: Shift your shoulders ever so negligibly. Close your eyes for a moment too long. Show me when and why you move. As Jane’s hair was being cut, she felt that she was that alien, pulling up into the barber’s chair to learn about a look or natural movement.

He snipped at her bangs. His neck sprouted through the collar of his shirt so amiably, so close and inclined like a best friend. Her eyes swept down the line of his body, down to his brown belt that sagged with its own weight. She saw herself reaching for the buckle and touching it with the tip of her finger as though picking out a pastry from a glass display.

“What is it?” the barber said.

“Oh,” Jane said, startled. “Is your buckle an heirloom?”

He stopped and seemed to be working out a response. “No,” he said. The bass picked up. He unclasped his belt, slid it through his pant loops, and placed it gently by his jar of combs out of arm’s reach. The action was like a complex dance move made to look easy.

“Show me what you did there,” Jane said, mystified as to why the barber chose to remove his belt immediately after she’d asked about it.

He held up the scissors and snipped the air. “With these?”

He slid his belt back through the pant loops, clasped it, unclasped it, removed it, and placed it gently by his jar of combs. “Is that what you wanted to see?” he said.

“I didn’t mean anything by it. Just felt like taking my belt off.” He pointed some sort of air hose at her neck and blew all her loose trimmings away. He twisted her chair oblique to the mirror. “You’re all set,” he said, a rumble in his voice.

An older barber approached and began to sweep the hair trimmings that had piled up around her chair. Someone turned up the music and the bass sounded produced by bees and giants. She examined her reflection in the mirror. The cut was quick and he had cut more than she wanted, but she appeared new, like a girl with the right kind of twinkle in her eye. She felt a sudden urge to travel and imagined herself in California with the barber taking surfing lessons, eating at outdoor restaurants lit with strings of white globe lights, walking hand in hand down the boardwalk, signing their names on a large rock with a permanent marker, purchasing souvenir tank tops with large holes for your arms. She imagined giving her former fiancé the middle finger. She and the barber kissed under a blood moon. The kiss was gooey, like one of those candies that bursts with liquid. She gave up soda—Coke, Pepsi, Sprite, Crush, Barq’s, everything. She adopted a dog with three legs and they went on restorative hikes together. The barber made her laugh, and even though he had only been funny in an illusion, she laughed out loud in her chair as though everything had been true. She stood up and handed the barber cash. She reached by his jar of combs, grabbed his belt and circled it around her waist. She clasped the buckle and left the shop.

Marisela Navarro's writing has appeared in Hobart, Tor.com, The Master's Review (Fall Fiction contest), Tahoma Literary Review, SmokeLong Quarterly, and elsewhere. She holds an MFA in Creative Writing from Emerson College. She was born in Puerto Rico and grew up in Central Florida. She lives in Boston with her husband and son.