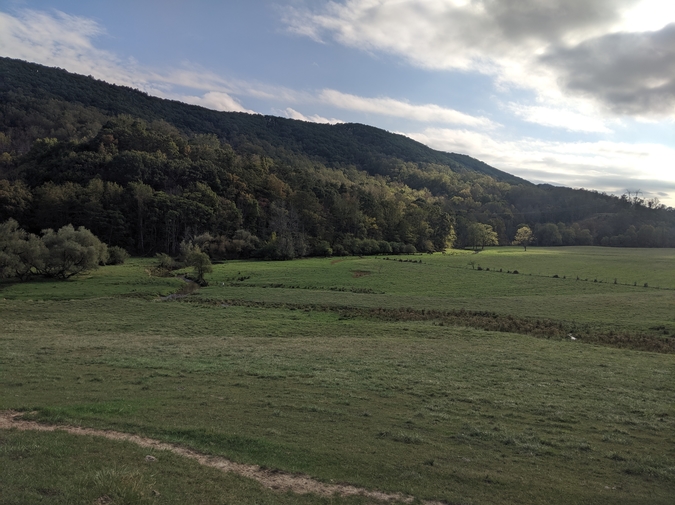 Staggering through the humdrum act of tidying the kitchen, I wash cups, stack pans and lay down forks in a drawer. While humming some tune, my thoughts scatter and a teaspoon goes in a zealous sweep with the onion peel and bits of paper towel. In a similar way plates disappear too, cleared away by accident inside a pizza box late at night when the mind is no longer operating wakefully. Everyday objects like that are often brought along to other rooms — or the porch, or maybe on a picnic.

Not a chef’s knife. It’s too bulky to throw out absentmindedly. And you have no use for it on a picnic. I can only think of a few occasions where you might need one of those outside the kitchen. Besides, I don’t even like knives. Ever since my surgery I find them offensive looking. Any one of them could potentially cut you open.

It’s funny, they cut me open to take out the thing that was making me ill and I still feel bad. No, I’m no longer sick like I used to be. Now there’s a different type of hurt. The bad feeling isn’t located anywhere. It sort of moves around in the parts of me that have no distinct material form, a kind of rustling malaise. You can’t remove it with an incision.

My doctor suggested recovering somewhere quiet. I chose this place, the woods, a nice little cabin, tall trees that breathe, a sparkly lake a reasonable walk away. The location is practical; it is secluded without being too isolated, which could unsettle a city soul like me. The nearest town is about half an hour away, less when I speed.

There isn’t much there, but the locals are friendly, they have really good pizza and an okay supermarket which, thankfully, stocks my favourite cookies.

The thing is, I haven’t even used that knife much. At best, it came in handy a few times to cut pizza. They make them thick and sort of chewy here, you need a good knife to make a clean cut. And because of my post-op weariness of sharp things, I wouldn’t use it to chop vegetables. There’s an old food processor for that, where the blade is safely contained inside a plastic bowl.

The thing is, it looked expensive and I’m worried that the landlord will take the deposit at the end of my stay, to teach me a lesson. The knife probably doesn’t cost as much as the deposit, even though it must be pricey. But this is his property, and he gets to decide the relevant value of things for him. A designer knife is part of the woods-chic vibe promised to guests. His anger would be justified. Think about it, replacing one, or a couple of items in that price range after every guest would pretty quickly reach a deposit type of amount, maybe more. Without even factoring in the effort needed to constantly replace things. It is fully understandable, he is trying to run a business. I’m the one in the wrong here.

Had I broken a vase, it wouldn’t be as bad. Events like that are outside of reasonable control. Anybody can slip and trip over a vase. The removal of a large knife requires premeditation. You would need to have something specific in mind and bring it along for whatever.

Did I use it at some point to fix something in the house? No, nothing has needed fixing. Did I take it out to the porch to cut a pizza? No, the wobbly table is way too small to fit a pizza box and a big knife on it. It would be impractical. Did I accidently stash it away in one of the cupboards or a drawer where it doesn’t belong? No, I’ve checked. I even looked under the bed.

There was another possibility, although it did not feel all that probable. Maybe, maybe, I brought it along on the hike in the woods yesterday. I couldn’t recall planning to do it, or intending to do it. But many of my decisions are spur of the moment. Many of my actions happen while thinking of something else entirely. And often I won’t even remember what I was up to until seeing some proof of it, like – oh look the bed has been made, an email saying “thank you for ordering book such-and-such from business so-and-so”, a text proving I had invited someone to come over in a fit of mopiness.

I left the kitchen to check my backpack, which was in the living room. There was nothing inside it. For good measure, I also checked the old wood burning stove, which didn’t work. The knife wasn’t in the stove.

With a sigh, I headed out to the porch. These woods are old. The trees are tall with roots that knot and drag along the ground. Their trunks are thick with years and their crowns shut out the light in a conspiratory manner. A dense vault of branches keeps the soil permanently humid and sticky.

Aspen, beech, birch, linden, oak, Serbian spruce – the pamphlet that came with the house lists the local flora alphabetically. Before, I knew next to nothing about trees. Now, thanks to the handy brochure, I am learning: “The Serbian spruce is a medium growing evergreen. It never drops its needles, which are dark green and silver in colour. One of its most striking features are the unusual purple seed cones. The Serbian spruce is an efficient windbreak tree.” And so on. An entire section of the booklet was dedicated to the main attraction in these parts, the rare box elder trees which are native to the area and the oldest in the forest. I went to check them out for the first time yesterday and probably brought along the knife?

I laced up my hiking boots, put my phone, a water bottle and some granola bars in the backpack and headed back to the elder grove to see if the knife was still there. At this point, it wasn’t even about losing a deposit, or an uncomfortable conversation with the landlord, it was more a matter of not leaving a blade in the woods. Some poor animal could really get hurt if it stepped on it, or something.

It took a good while to get back there. There is no specific trail leading to the elders and you need to be patient with the GPS, because the signal is patchy up here, at best. Also, I tend to get stiff and crampy around my scars. It takes me longer to walk than somebody perkier, who is still in mint condition. Climbing along a rocky tract, I half-muttered to keep myself company: “a vintage action figure, missing my ray gun or galactic shield or whatever. No longer a complete set. No one would want to collect me.”

I probably haven’t been a collectable for a long time, maybe I never was. And not because there is a part missing here and there, scuffmarks of scars and all the rest of it. It’s more that thing moving inside me. Even when I was a kid my mom would say “Leave Sunny alone, she’s a little moody today, a little blue.” And everybody would leave me alone.

Back among the box elders there was still no sign of the knife. Although, there were signs of other sharp objects. These trees are known for the blood red stain of their wood. If you carve beyond the thick, craggy bark you can reach its scarlet flesh. People come here with all sorts of knives and things to carve initials and hearts into the bodies of the trees. In the souvenir shop in town they sell burls made from it. The blocks look like marbled slabs of meat.

The longer the cut is exposed the more it fades. Only fresh gashes give the startling thrill of seeing a wound. Somebody had cut two thick branches off one of the elders, making it look like it was surrendering, meekly raising hands with bloody palms.

There was nothing there. I sat down on a rock, doubting that the knife was ever here to begin with and failing to think of anywhere else to look. If it had not been me to take it out of the house, then someone must have come in and taken it. The thing is, there were no neighbours for miles. “That’s that. The knife is gone, buddy.” I said patting the surrendering elder. The tree was a tree and I was me, and we had both given up.

I returned to the cabin and watched the day end from the porch, black pointed treetops against a pink sky and a single iridescent star staring at me from above. The knife’s importance loosened its hold on me. Worrying whether I had lost it or someone took it seemed laughable. Other things demanded my attention. There are so many noises around here. Each thing, whether lake, tree or rock, has a voice of its own – creaking, sighing, squeaking, howling. A forest is far busier, day or night, than any city I have ever lived in. It is more invasive too. Here, winds walk through the walls easier than a ghost.

Mersiha Bruncevic is a writer and literary scholar based in Paris and Gothenburg. Her work has appeared in Tablet Magazine, The London Magazine, 3:AM, Review 31 and other journals.