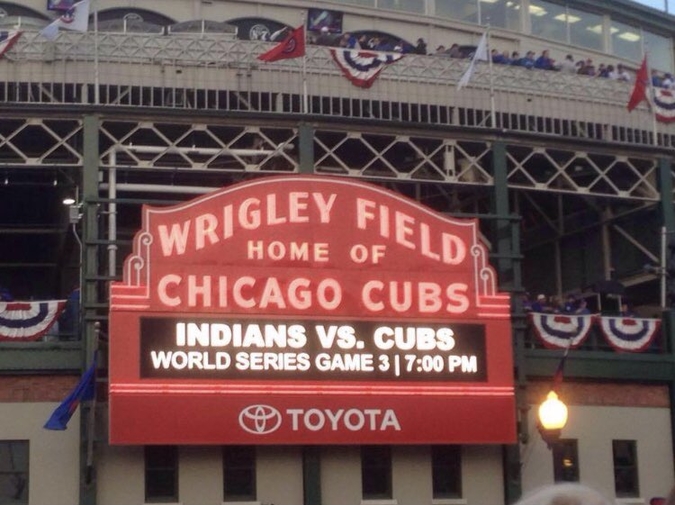 Ever since I can remember, we have made the mile walk from the corner of Ravenswood and West Eddy to Wrigley Field. Dad parks here to avoid paying exorbitant lot prices. Day games only—at night you’ll get towed if you’re not a resident. Plus, it’s good exercise—best on a late Sunday morning, when the sun busts through the canopy into the street ahead of a 1:20 game. Scalpers and others hawking water, t-shirts, and parking litter the streets along with the Cub fans. Folks who live in the neighborhood consider us a pain in the ass. Some of them, dressed in their best, walk casually across lawns while the el cars rattle above us. I’m the only one who gets nervous. I’m in college and the Cubs are in a rebuilding year. I’ve got my radio, you’ve clipped on your sunglasses. We slather up with sunscreen before leaving the car, carry everything we might need on our bodies, and have already started complaining about the team. We’re ready.

As soon as we turn right onto Addison we land immediately under the el again, the bridge over the street home to hundreds of pigeons and their shit. It’s amazing how in daylight certain corners of the city never brighten. As we wait for the light to change, we read the small billboard advertising “T-shirts screen printed in 30 minutes”—a claim that’s stood for years. It’s in our rearview now that we’re on the main route, rambling past the Dunkin’ Donuts.

A little further up we hit St. Andrews. The massive complex consisting of a church, school, and gymnasium take up both sides of the street for over a block. The playground on the left side of the street is empty, with outlines of foursquare and tetherball courts—games I hardly remember, and didn’t know children still played. At night, I’ve heard basketballs beating off the walls of the gym. We pass on the south side of Addison and I run my hands across the rough brick of the church, the tiny dormer windows suffusing heat high over the street. There’s dark music coming from inside. You tell me about how one of your sales buddies got married here many years ago, how it took 10 minutes for the bride to make it down the aisle. We pass the tiny “fallout shelter” sign—riveted metal, right at my eye level. I make a joke about it and you tell me again how you did those drills as a kid in the ’50s. It wouldn’t have done any good, you say. I imagine children clustered under their desks in the basement and how even that would not protect them. I imagine the reasons they do it now. None of it is a comfort.

Once we have the corner of Addison and Ashland in our sights, it’s time to race. We sync our speeds, a man past his prime and his teenage daughter, running through what seems like the last crosswalk in Chicago to flash the words, “WALK” and “DON’T WALK.” Breathing heavily, we make it to the corner of the vacant dry cleaner’s. Still no one has rented it, I say. It’s been years since it was occupied but it looks tidy, as if the owner is ready to open up again on Monday and take in a dozen winter coats. Even though no one really wins, this is the only corner where we race.

We slow down at Addison and Janssen to take in the most meticulously manicured flower beds in Lakeview. The thin, 60-year-old gardener is out there on Sundays with her gloves on, primping luscious sprays of roses. It’s a Rococo painting, except she has no doting partner. When she’s not there, I stop and smell some of them, and then the lilies in the locked garden up at Holy Trinity Lutheran.

Once we reach Southport, it’s the best food in the world…thin crust D’Agostino’s pizza, cut in squares, and Julius Meinl, the coffee house from Austria. Every cup of coffee comes on an oval silver platter, with a little glass of water and a caramel biscuit. They even have stands to keep your newspaper staunch while you read. You can have crepes, or a mélange, perhaps Mozart cake? I use the bathroom here—no key needed. Afterwards, I grab a caramel biscuit from the counter for Dad. He loves them, but never eats them right away. He likes that they’re free. Later he tells me that when his diabetic girlfriend crashed, there were two in the glovebox he gave her, and it helped.

At Lakewood and Addison, Mark Twain Cleaners is on one side of the street and Guthrie’s Tavern the other, two of the smallest small businesses in Wrigleyville, both packed at different times. I joke that the latter should be called “Samuel Langhorne Clemens Cleaners” because I’m just learning about literature and I think I’m smart. Dad says nothing and we plod along.

We pass Racine and we’re almost there when Dad stops short at “Yesterday,” unprompted, and mimes pushing over the right side of the ancient, leaning shop. Its dirty yellow siding and gray windows glinting in the sun show off the building’s battered condition. We mumble about how it must be in violation of a dozen or more building codes, but how the owners are probably greasing the alderman’s palms to keep the place open. The store was “junktique” before the term even existed. For years on game days, the elderly African-American couple that runs it sold ice water out of the crooked door frame, but now they are closed on Sunday afternoons. I think it’s to avoid the unwanted traffic of rowdy families and tourists. Every time we pass by, when my dad threatens to push over Chicago’s leaning tower, I tense up then laugh—it’s a photograph.

In this neighborhood of century-old buildings—some brick, some wood, some stone—the last one we see is an amalgam. Past the now demolished McDonald’s on our left and the Taco Bell on our right is the ballpark. You can see the burst-open red of the marquee from a block or two back. We’re pulled forward, as if on a conveyor belt.

Sandra Marchetti is the author of Confluence, a full-length collection of poetry from Sundress Publications (2015). She is also the author of four chapbooks of poetry and lyric essays. Sandra’s baseball poetry appears widely in Baseball Prospectus, Poet Lore, Blackbird, The McNeese Review, Southwest Review, and elsewhere. Her prose on the game can be found at Barrelhouse, Entropy, and Pleiades. She is currently writing a book of poems about the Chicago Cubs, listening to baseball on the radio, and going to games with Dad. Sandy earned an MFA in Creative Writing—Poetry from George Mason University and now serves as the Coordinator of Tutoring Services at the College of DuPage in the Chicagoland area. This is her fourth annual appearance in Hobart's baseball issue.