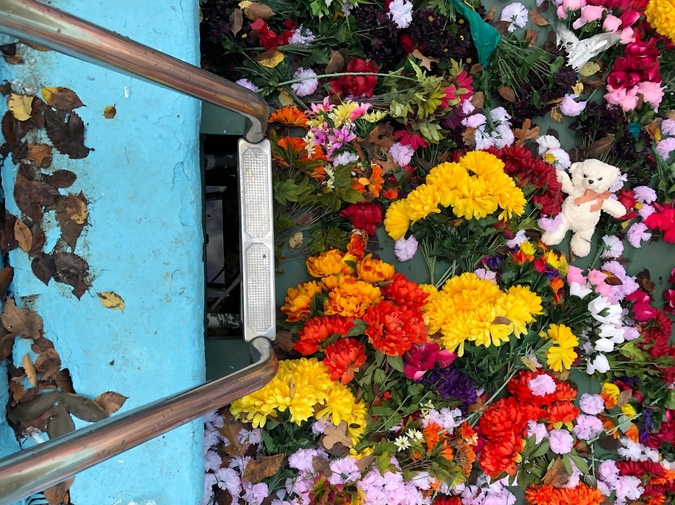 The world has crash-landed into climate change, and no one should just drive around without destination or purpose because greenhouse gases, ozone, catastrophic end, etc. Obviously. Yet when my son says, “Can we drive around and listen to Mac Miller?” I’m already mostly to the car before he finishes the sentence.

“’Come Back to Earth,’ then ‘Hurt Feelings,’ then ‘Self-Care.’ In that order,” my son says. He’s 10 and has gone through musical phases: The Clash, David Bowie, The Church. He memorizes. He analyzes. He falls hard. “It’s not really the words with Mac Miller,” my son says. “It’s the feeling, the layers,” and then he buckles.

We’re right in the middle of Midwestern fall, and the trees have gone shameless with color. We live in a small college town that’s a little bit Stars Hollow, but also our house sits on a sort of superhighway between two meth houses. Each day clusters of people trail down the street back and forth. Today two men have stopped at the corner where I wait to turn right. Our car shakes a little with bass. The two men lean back against a stone retaining wall and stare at the red leaves of the tree immediately above them. Mac Miller sings “I was drowning, but now I’m swimming,” and I turn the corner.

“Where does he live?” my son asked me the first time we listened to “Self-Care” a few weeks before.

“He doesn’t live anywhere,” I told him, “He’s dead. He died. Overdose. Recently.”

He’s matter of fact like that, and it unnerves the shit out of me.

We drive up the hill to campus. All the girls are in patterned leggings. Everyone carries to-go coffees, and I can’t believe we are all still just throwing out cups.

I’m a white middle-aged mom driving through a mainly white college town listening to a now-dead Jewish hip-hop artist whose video for “Self-Care,” released right around the time of his death featured him trapped in a coffin. I’m older now than I’ve ever been. Obviously. Who cares.

We drive slowly past a gothic building with all its dark angles and show-offy haunting-ness. Mac Miller sings the word “oblivion” again and again and lets it linger and trail off. The light is on my son’s face, and I think: this. I’ll take this.

Drink:
For your son: Blue Sky Root Beer, no ice, not chilled, straight out of the can
For you: shot of tequila, simple, the cheap kind, to pretend for a minute you’re still 20

Amy Stuber has published short fiction in The New England Review, Copper Nickel, West Branch, American Short Fiction, The Antioch Review, Ploughshares, and elsewhere. She has new work forthcoming in 2019 in Arts&Letters, J Journal, Pithead Chapel, Split Lip, Wigleaf, Cheap Pop, and Joyland. She serves as a flash fiction reader for Split Lip.Find her on Twitter at amy_moss_ or online at www.amystuber.com.