Stop Dragging: A One Act Play 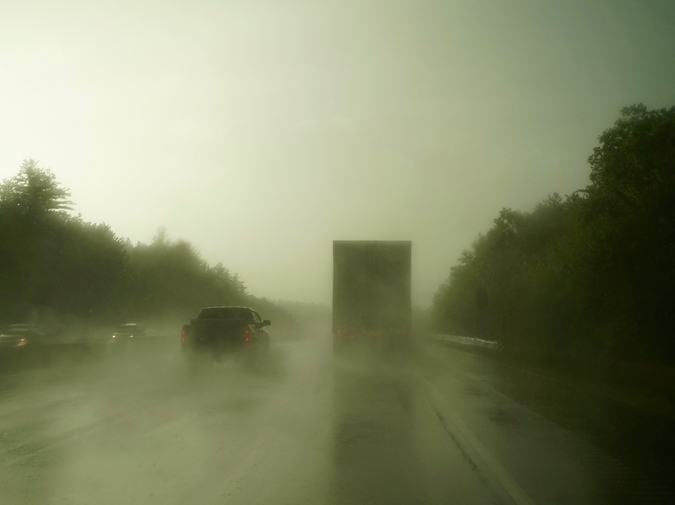 [The stage is unadorned but for an elm tree in the center.. An easy chair and a full-length mirror at stage right.]

[The Little Girl, The College Girl, and The Mom stand in the background in shadows. The Little Girl is wearing a winter coat, three sizes too big for her and similarly oversized galoshes. She’s wearing a stocking cap with a brim, pulled low over her face. She has a large bag full of books slung over her tiny shoulder. The College Girl is dressed modestly in sweater and bell-bottoms, her hair coiffed in the manner of Farrah Fawcett. The Mom is nondescript.]

[Menopause is seated in the easy chair stage right. She is wearing a pink, bedazzled track suit. She has before her the full-length mirror. On the floor next to her, a set of hand weights, which are also pink.]

[The other characters all stand under spotlights. The Donald Trump Novelty Toilet Paper sits, tightly spooled, on the floor. The Bad Ex-Boyfriend is off-stage as the curtain opens.]

The Little Girl: [Clomps out of the shadows and stands next to Counselor Troi.] I have a question.

Societal Expectations: [Crosses his arms over his muscular chest.]

Menopause: [Hoists herself out of her chair with difficulty.] I’m listening.

The Little Girl: [Clears her throat.] I want to know what is wrong with me.

[The others look at the girl, then at Counselor Troi.]

The Little Girl: [Emboldened, speaks up.] So there was this circle of girls on the playground. They always stand there like that. All of them, huddled. I was outside the circle like I always am. I laughed when they laughed, inching in closer, but they pretended not to notice me, except Mimi Youngblut who turned to me and smiled. Counselor, I gave her my warmest smile back. [Pauses.] She told me I had a booger on my face.

Menopause: [Draws her hand to her mouth.]

The Donald Trump Novelty Toilet Paper: We are co-creators of our own reality.

Counselor Deanna Troi: And you want to know what is wrong with you? Look, people decide if they like you or not within the first five seconds. Anything you say or do after that merely confirms their original decision.

The Bad Ex-Boyfriend: [Walks with a swagger onto the stage.]

Stevie Nicks: It’s not time for you yet.

The Bad Ex-Boyfriend: [Backs slowly into the shadows.]

The Little Girl: Anyway, I have learned to enjoy my own company. [Shrugs off her bag which lands with a thump. Unzips it and pulls out a book. Shows it to everyone.] I’m teaching myself ballet from a library book!

Menopause: [Tears off a hangnail with her teeth.]

The College Girl: [Steps into the light.] I played the part of the ballerina in a student production of Harrison Bergeron. I had to kiss the guy who played Harrison. His lips were dry and salty.

Counselor Deanna Troi: [Archly] He wasn’t attracted to you.

Societal Expectations: He was probably gay. You were really hot.

The College Girl: [Smiles winningly at Societal Expectations.] Thank you!

Menopause: [Regards herself in the full-length mirror. Picks up the hand weights, does several bicep curls.]

The Little Girl: [Picks up her bag and clomps over to the elm tree, center stage. Leans her back on it and sinks to the ground. Absently rakes her nails through the grass, picking out rocks and particles. After a beat, sits up straighter.] That’s him coming over the bridge now, swinging his lunch pail. [Stands.] I’ll go and meet him halfway and he’ll give me the rest of his apple pie. He only ever takes one bite. [Rubs her tummy.] I’m going to tell him. I’m going to tell him today. [Starts to walk forward. Hesitates. Runs away into the shadows.]

[All the stage lights dim. Then brighten again.]

The Mom: [Steps out of the shadows, addresses Counselor Troi.] Okay, I’ve got one. I was at the kids’ new school in Sydney. Speech night. I summoned my courage and made myself approach the group of moms who were standing in a circle chatting and laughing. You know that sound groups of women make? It’s jangly and discordant, like a band warming up. God, I hate that sound.

The Mom: Anyway, I ventured some stupid comment about the weather. “Hard to get used to this heat in December, ha ha.” Finally they turned my way. The really pretty mom said, “Oh, you’re the American.” I said yes and held out my hand.

The Mom: [Sighing.] She told me my kids were not making enough of an effort to fit in.

Counselor Deanna Troi: That’s called honesty. The others were picking up on your many shortcomings. Yours and your children’s.

Menopause: Some empath. You are a terrible counselor.

The Donald Trump Novelty Toilet Paper: Hear, hear! They were all doing the very best they could!

The Bad Ex-Boyfriend: [Wanders back on stage, waving a slim paperback, addresses The Mom]: Your “stories” are just you feeling sorry for yourself. I thought there’d be more about me in here.

Stevie Nicks: [Sings, twirling, her voluminous skirts belling out around her.] This doesn’t have to be The Big Get Even.

The Mom: [Wordlessly draws back into the shadows.]

The Little Girl: [Stepping forward.] Once I wanted to see the sun rise. In all the best novels, the main character watches the sun rise, usually when they have reached an important decision or realization. [Pulls The Sun Also Rises from her bag, waves it around.]

The College Girl: [Derisively.] That’s not from the book, it’s from the bible.

The Little Girl: I laid on a blanket in my back yard and watched the stars for a long time. I woke up to birds and light. [Pauses.] The sun had risen, but the trees and houses were blocking it.

Counselor Deanna Troi: [Nodding.] You were always doing stupid shit like that. By the way, why are you dressed like that, all bundled up in that huge coat?

[Offstage a factory whistle blows. All Players stop and listen. All but The Little Girl withdraw into the shadows.]

The Little Girl: [Goes and sits under the elm tree. Stares at her clasped hands.]

[The stage is brightly lit at first. Gradually, as The Little Girl talks, it dims.]

The Little Girl: I was going around collecting for my paper route. I’d stopped at Roma Jane’s and used some of the money for two Snickers bars and a Mountain Dew. Mr. Parker’s apartment was on the second floor. I had to climb metal stairs on the outside of the building to get to it. He said, “You look hot, kid. Come inside while I get my checkbook.”

The Little Girl: [Shrugs uncomfortably in her oversized coat.] His apartment was air conditioned. He told me to shut the door. I set my pop on a coaster on Mr. Parker’s occasional table. That’s what my Mom calls them. Mr. Parker had gone down the hallway into another room. It felt so good and cool in there. He had a marmalade kitty that was curled up asleep on a tiny four-poster bed like a human’s. I started to pet it. Mr. Parker said, “Hey, Paper Doll.” I looked up. He had no pants or underwear on.

Menopause: [Wails.] Why is all this being dredged up now?

Counselor Deanna Troi: It’s because of you.

[All Players except The College Girl withdraw into the shadows.]

The College Girl: [Paces back and forth under the elm tree. Speaks with urgency to herself.] I’ll finish my degree, go to grad school, and become an archeologist. I’ll travel the world. I’ll watch the sun rise over the pyramids. [Pauses, scans the sky.] All of my friends will be archeologists. I will marry an archeologist! [Laughs.] We will live part of the year in New York City. He will love books too. He must. We’ll have shelves and shelves of books lining the walls and stacks of books on the floor. [Pauses. Smiles.]  And! Our home—our home will always be filled with light and love and music and laughter.

The College Girl: And should Loneliness ever pass by on the street below, we’ll throw open the window and shout,“Come in, come in!” [Smiles. Marches resolutely into the shadows.]

[A beat. A breeze blows. Several leaves of the elm tree flutter and float to the ground.]

Counselor Deanna Troi: Well that was hard to watch.

Stevie Nicks: But you never answered her question.

Counselor Deanna Troi: [Considers. Speaks.] She was perfect. She just didn’t know it.

Menopause: [Slumps into her easy chair. With conviction and to no one in particular.]: Sorrow is a stone on one’s chest. It’s like those lead capes they drape over you at the dentist.

Menopause: We are kindred.

The Donald Trump Novelty Toilet Paper: [Unrolls himself across the floor and out the door like an unloosed tongue.]

Kathy Fish teaches fiction for the Mile High MFA program at Regis University. She also teaches her own intensive Fast Flash workshops online. She has published four collections of short fiction: a chapbook in the Rose Metal Press collective, A Peculiar Feeling of Restlessness: Four Chapbooks of Short Short Fiction by Four Women (2008); Wild Life (Matter Press, 2011); Together We Can Bury It (The Lit Pub, 2012); and Rift, co-authored with Robert Vaughan (Unknown Press, 2015). Her story, “Strong Tongue,” was recently chosen by Amy Hempel for Best Small Fictions 2017 (Braddock Avenue Books).