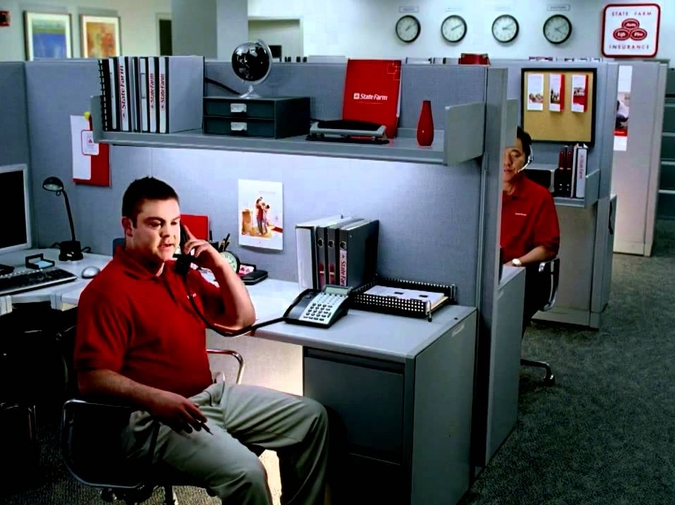 Jake from State Farm hangs up the phone and hustles to the bathroom. He relieves his bladder, leans his head against the cool tile and breathes a sigh of relief. The last client just kept on talking. Jake isn’t even sure how they got started on boats, water skiing, and then some place called Lake Chautauqua, which he pictures as a combination of the lake in On Golden Pond and the television commercial where the girls in bikinis are water skiing.  He is not sure what that commercial is for – raisins, maybe? – but the brunette looks like Cindy at twenty-two and he has a recording of an episode of Bones that he’ll never erase so he can see that smile, that hair waving, any time he pleases.

They were going to go to the Dominican Republic for the honeymoon and he wonders if they would have had water skiing there. The serenity to accept the things I can’t change, he thinks.

He finishes at the urinal and then moves into the stall, pulls down his pants and sits on the toilet. It is the only place he can decompress, just be alone for a few minutes. No phone, no computer, no Mr. Hernandez spouting motivational phrases, no lonely man halfway across the country asking leading questions about boat insurance they both know he’ll never need.

He wonders if he is going to the bathroom too much, what the right amount is, if his urine is too yellow or not yellow enough. He wonders about the cramps in his stomach, the little twitch that has started up in his left eye. Ever since the night shift he feels a little sick all the time. He should cut down on coffee, eat better. He should do a lot of things but right now is about triage, taking care of himself and working through the steps. Meetings every afternoon. Work every night.

The last call took forty five minutes. Jake has been doing this for only four months but he can tell the lonely people when he hears them: the whispers, the light jokes and half-convincing attempts to seem interested in insurance. He is comfortable with his side of these conversations, safe in the confines of his script:  “yeah…wow…okay…really?...huh… interesting…okay, so your current plan…”

He checks Cindy’s Facebook. She is trying some new food service and has been posting pictures of her meals. “Tilapia Meunière with Moroccan-Spiced Lentils and Rainbow Chard” was tonight’s dinner. He scrolls down. No check-ins or mentions of dates or other men. Nothing but images of chicken, fish, or beef atop a bed of vegetables or lentils or other things he can’t quite name. He wonders if he could name them if he was drinking. He wonders if he would care more, or less.

Night shift has thrown the timing of his meals off. He’s not sure whether he should have a sandwich before he starts or take a break in the middle of the shift, if he should have breakfast at breakfast or find a place where they’ll give him a burger. But that might also be a place where they would give him a beer and that would be no good right now. Not just right now, he reminds himself. That would be no good.

He needs to get back to his desk before Mr. Hernandez notices he has been gone longer than five minutes. Mr. Hernandez is twenty-four and has visions of corner offices and corporate retreats. Mr. Hernandez just may realize these things and more, and Jake is not sure if he should be sad or angry or feel sorry for the young man, with his short sleeve shirts and Wal-Mart ties, the keys that jingle on his belt as he stalks the cubicle aisle. Jake regards his own Dockers and red State Farm shirt. He lifts the shirt and smells.

He has been talking to Cindy’s mother, Ruth, who answers the phone even though her daughter would be furious. Jake has been making amends and so far it has been kind of bullshit – sorry I was hungover, sorry I wasn’t there for you, sorry sorry sorry. He has been selling Ruth on the twelve step business, though, working it like some of the older people at the meetings, the ones who have turned being an alcoholic into being a semi-professional public speaker. He is better at this than he is with the insurance. He is invested. He improvises, cries, prays, laughs, shares.

Making amends with Cindy may the last time he ever sees her, or it might be the beginning of the part that will make all of it -- the DUI and the meetings and parking  his car in an emptying lot in a strip mall a half hour outside of Hartford, trudging in to work while the rest of the world is trudging out, talking to lonely strangers about insurance in the middle of night – somehow make sense.

The last caller’s wife actually got on the phone and yelled at him. The first time that had ever happened. “She sounds hideous!” the wife said. She hung up the phone and Jake could feel the tenuous strand between them, two men play-acting a conversation about boat insurance in the middle of the night, peeling back toward him like a bungee cord suddenly released.

He Googles Chautauqua. There is a lake there and it does look lovely, but nothing like Golden Pond. It is a big lake, built up, with smiling women drinking white wine, places where good looking people sit on decks in the sun and drink cocktails and laugh. There is a Institution there. He briefly wonders what that means and then puts it out of his mind. He is sitting on a toilet in the middle of the night in a rented shirt and tomorrow afternoon he will drink tepid coffee at a meeting and whatever the Chautauqua Institution is, it is not a thing for him.

The bathroom door opens and he hears the rattle of Mr. Hernandez’s keys, the water running, and then the hand dryer’s roar. “Okay in there, buddy?” Mr. Hernandez says.

“Yep. Okay. Just…” Jake says. The bathroom door shuts and the keys jingle back toward the row of cubicles. It is 4:15. Soon the first inklings of sun will smudge the windows along the empty row of cubicles on the back wall, the day shift cubicles, and he will count down the hours and then the minutes until 6:00. He will go to Denny’s and eat a Meat Lover’s Omelette while he reads the sports page. He will watch the old men in their groups, carefully avoiding eye contact while he listens in to their light grousing about the Patriots or Medicare or their adult children. He will wipe his plate with his wheat toast, tip five percent and nod at the waitress, then go home and watch whatever CSI is on until he gets tired, and it will all be fine. It will be fine.

Jake from State Farm pulls up his pants and cinches his belt. He exits the stall. He goes back to work.