Staring Into the Sun: A Brief History of William Horatio Bates 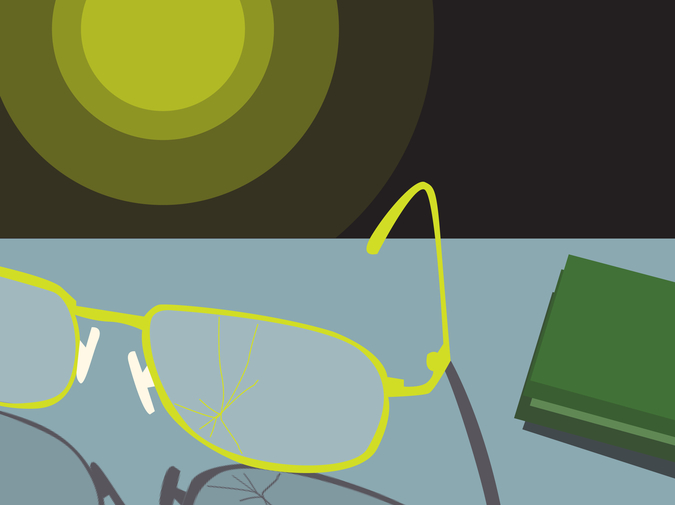 Following a years-long bout of amnesia at the beginning of the 20th century—having lived several other lives in several other cities, his wife searching for him in vain until her untimely death—ophthalmologist William Horatio Bates resumed his practice in New York City and began formulating a theory for how the eyes could heal themselves. Claiming human eyes, like fish eyes, elongated to focus, Bates created a series of relaxation techniques that all worked toward the same ultimate goal: to change the shape of the eye.

He asked his patients to look at a blank wall without trying to see. To lightly place their palms over their closed lids until they saw perfect blackness. To visualize black letters and black punctuation marks. To stare into the sun. To hold a “burning glass” to enhance the effects of “sunning” the eyes. To swing or shift the eyes in precise ways until they achieved “universal swing.”

He also encouraged his patients to throw their glasses away. “It is fortunate that many people for whom glasses have been prescribed refuse to wear them, thus escaping not only much discomfort but also much injury to their eyes,” he tells us. While others “submit to an amount of unnecessary torture which is scarcely conceivable.”

Bates was not only opposed to glasses as practical tools, he was disgusted by them. He tells us that while, “some persons have actually come to consider glasses becoming, there are still some unperverted minds to which the wearing of glasses is mental torture and the sight of them upon others far from agreeable. As for putting glasses upon a child, it is enough to make anyone sick at heart.”

He tells us that, “When people are struck down in the street by automobiles or trolley cars, it is often because they are suffering from temporary loss of sight.”

He tells us that, “Telling lies is bad for the eyes.”

He tells us that, “I have made dogs myopic by inducing them to strain to see a distant object.”

I found out about William Bates when I begin struggling with vision loss, in my mid-twenties. If you try to research vision loss in any capacity, you find him. Sometimes you don't know you're finding him, but he's like Scientology or Ramtha's School of Enlightenment: the basic ideas quietly embedded into products ready for mass consumption. When I found out about Bates, I celebrated: a relatively unknown scam artist. What a find! I told whoever would listen. He had people stare into the sun! I would say, delighted. I spread the gospel of his false gospel. Perhaps my delight was because vision loss rarely has comic relief that isn't mean-spirited. But here it was, in the form of a man, an apparent cartoon, a joke, or so I thought.

Were he born a century later, Bates' methods would have made him the perfect candidate for the late-night infomercial circuit. I like to imagine it: a room full of people, palms over their eyes, a sonorous voice guiding them toward perfect blackness. Or a line of people, swinging their eyeballs in exact unison, the good doctor cheering them on from the sidelines.

But his ideas and his writing are two different things. At some point, I picked up The Bates Method for Better Eyesight Without Glasses—the still-in-print posthumous revision of his 1920 book Perfect Sight Without Glasses—expecting to be delighted all over again by his strange con. And while there are countless absurdities to be found in his books, his prose is generally sober and clear-headed. The exclamation points I expected to be littering the pages are nowhere to be found. I expected the manipulation to be on the surface, obvious, silly. But read him for long enough and it becomes clear: He wasn't a scam artist, he was a believer.

At its core, his methods center around the idea that health issues arise when we don't trust or allow our body to work on its own. In western culture's emphasis on mind over body we've lost something crucial, and now our minds, to our detriment, constantly override our natural functions. To most of his followers it didn't matter if his biological claims were factually accurate or not, because his theories tap into something we all want to believe: that our body knows how to be a body.

All his techniques, he tells us, “are simply different ways of obtaining relaxation.” Essentially Bates was selling a bizarre form of meditation—a path to inner peace that begins with the eyes. In his books, he again and again reasserts that any sort of effort or strain is the enemy of good vision:

“Whenever the eye tries to see, it at once ceases to have normal vision.”

“[I]n all cases of defective vision a person is unable to see best where he is looking.”

“[T]he fact must be stressed that perfect sight can be obtained only by relaxation.”

But, he tells us, “This relaxation cannot, however, be obtained by any sort of effort.”

Dystopian novelist Aldous Huxley, a follower of the Bates Method, wrote The Art of Seeing in 1942 as a way of getting the Bates Method out of the back of pulp magazines and mail-order catalogs and into the minds of intellectuals. Huxley explains the concept of seeing-without-effort by saying, “Vision is not won by making any effort to get it: it comes to those who have learned to put their minds and eyes into a state of alert passivity, or dynamic relaxation.”

And doesn't that sound nice? Doesn't it seem that—if we could fully, truly, dynamically relax—that yes, our vision would be better? It should be that simple.

Despite the wealth of vision-improvement claims and testimonies, there's no scientific evidence that eye exercises, or any parts of the Bates Method, work. But Bates was as much a conspiracy theorist as he was a doctor, so a lack of scientific proof to him would just be viewed as part of a bigger cover-up—one more sign that the powers that be want to keep this knowledge from the masses. While his techniques could have gained traction before the early 20th century, they wouldn't have had much to be opposed to. It was the burgeoning optical industry that gave his exercises an energy. Here was a scam that profited from telling people that their bodies didn't already have the tools they needed. His eye exercises became political statements; tools to work against a corrupt system.

I feel it's why his ideas have reemerged with such force in recent years: They fit perfectly with the climate of the internet, where science and speculation vie for attention, and often mix so gleefully. Google “improve vision,” “books about corrective lenses,” or even, simply, “books about eyesight” and most of the results are descendants of Bates—all people and organizations convinced of the optical industry's scam, the hidden potential of the body.

Once the more absurd parts are stripped away—the morphing shape of the eye, the sun-staring, the burning glass—and some common sense lifestyle and dietary suggestions are added, it all seems vaguely plausible. I'm not a believer, by any means, but I see why people are. It's all there: a possible conspiracy, a do-it-yourself ethic, a belief in a body that's wise and powerful. Think of: the optometrist appointments, the expensive frames, the piles of boxes filled with disposable contact lenses, all that money. If these books and organizations simply plant the idea in the back of your mind that an entire industry—and even a whole branch of the medical profession—may not need to exist, then their work is not in vain; their ideas spread. And in this way, William Horatio Bates lives on.

Joshua James Amberson is a Portland, Oregon-based writer and creative writing instructor. His work has appeared in Tin House, The Rumpus, The Los Angeles Review of Books, Columbia Journal Online, and Vol. 1 Brooklyn, among others. Everyday Mythologies, a chapbook of his essays, was recently released on Two Plum Press. He's currently working on a book about eyes, vision, and blindness.