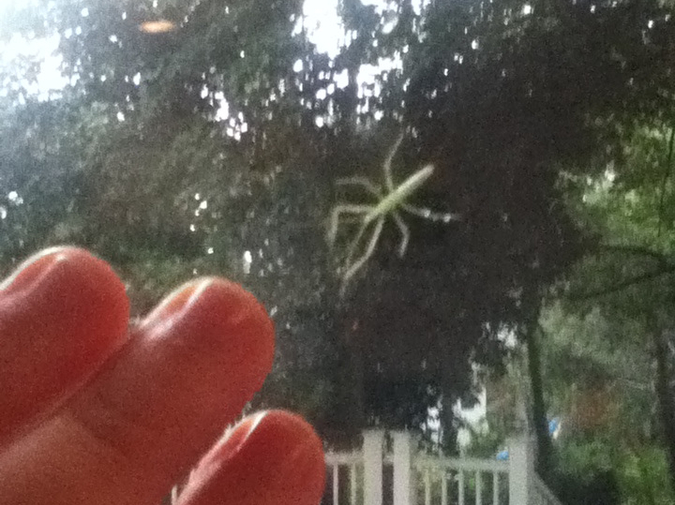 A cobweb behind my bedroom door strewn with the decaying remains of spider bits reminds me of my sister, Katherine, who used to play with them when we were children. My mother wouldn’t let her get a pet tarantula, despite many tantrums, so instead she played with whatever bugs crawled around the house. Eventually we noticed she collected them in a Tupperware container. I swear the spiders never bit her once. It was as if they trusted her somehow. A false trust, of course, because they all collectively died. She wouldn’t even dispose of the dead bodies—the living ones joined the dead. When my mother finally found out, while cleaning our shared bedroom, she screamed and hollered. Looking back, she says there must have been at least 20 spiders, but I thought there were more than that. It was a good thing Katherine had the lid on tight, because I never saw my mother throw something as far as she threw that little graveyard of bodies. She wanted me to get rid of them, knowing Katherine wouldn’t do it. My mother was cheap, too. She kept all the to-go containers, even those aluminum ones with the soggy tops. This was the first time she was actually willing to toss one out.

My father was gentler with Katherine and knew the right thing to say, until he didn’t. He told her we should flush the spiders down the toilet. “Imagine if that’s what happened to our bodies when we died, to go on one final journey.”

My mother callously responded, “I don’t care where they go but they can’t stay here in this house. I’m not talking about ‘out of sight, out of mind,’ I’m talking ‘out of house, out of mind” which she thought was funny and of course cued Katherine to start bawling. Once our mother left the room, it was sweet, the three of us, my father, sister and I, saying goodbye to little once-lived lives. Katherine got to flush them, and I had the honor of relinquishing the container to the church dumpster down the street. Katherine later told me that she thought of the spiders as her friends.

That night after dinner, to break Katherine from her sadness and the thick air of our mother’s inability to understand her, I said, “Well, at least they weren’t ticks! Imagine that.” But this might have planted a seed in my sister’s head, because soon ticks started appearing in our house. Every now and then long after my parents forget about the last time, a tick would appear on our old dog Teddy’s body. Someone, but never Katherine, would find the tick, sometimes behind his ears, once behind his leg. After the fourth or fifth time when our mother found a large bulge hidden under Teddy’s collar, my father jokingly asked, “Is this going to be like the spider thing all over again?” And Katherine broke down crying, “I didn’t want Teddy to be alone!”

She would find the ticks in the forest off of the rail trail across from our house. Sometimes she would make me come with her. “Let’s just see what we find,” she would say. I’d ask, “Like what?” She would tell me to find anything. “Just be adventurous. Use your imagination.” But I wasn’t adventurous and I didn’t care for spiders or ticks or tent worms which I feared would be next on Katherine’s list. It never was next, as far as I knew, but I wasn’t sure because eventually she stopped asking me to go on adventures. At the time I was glad for it.

She didn’t stop going on those adventures though. Most of the time, none of us knew where she went off to. She would be out for hours and hours. She never brought anything back into the house after the ticks. Our mother had instilled some sort of fear in her, threatened that she wouldn’t be allowed out by herself if it happened again. I guess that’s why when she was gone one early fall day, we didn’t think much of it. She made her way over to the windy old Happy Hollow Road, right off the trail, and it was one of those mornings that was just foggy enough. I jokingly told her time and again that someone someday was gonna just drive on by and smush her. I didn’t think that day would actually come. The story went that the weird girl down the street was playing in the road and got killed. She became a cautionary tale for the neighborhood children. Not what she would’ve wanted to be. But she saw a snake and she didn’t want it to be hit by a car. I knew that had to be the story. The snakes would freeze up, play dead, and she would just slowly, gently scoop them up and put them in the grass. It happened all the time.

Now I’m sitting here in this bedroom thinking about all of the dead things lying around, which any other time would spin me into a paranoia-induced cleaning frenzy, but lately when I see them, spiders mostly, I leave them as they are, which is to say, I don’t make them more dead. I wonder how long it might take for them to evaporate, if that happens, or, if over time, their bodies slowly curl into tight balls that if I dared touch would crumble, and if they crumbled, would sort of be like they evaporated anyways, or maybe just disappeared into dust onto my fingers. Residue of death on my living body. Although I’ve let the spiders collect, mostly in the web behind my door, tonight I pick one up. As I pull the web, all of the other spiders wrap around my fingers, and I crumble one into Katherine’s ashes.

Kennedy Coyne is a fiction candidate in Virginia Tech's MFA program. Her interview with Eileen Myles can be found in Michigan Quarterly Review Online.