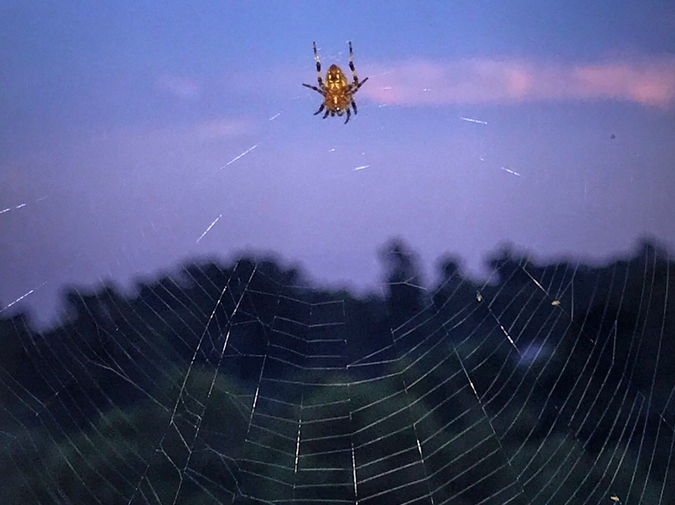 I was eating sour widows at the wedding reception when I saw you across the room. You were looking at the happy couple as they fed each other white cake, and then you were looking at me. Your eyes said Hey stranger, but the odd way you swayed to the music said you were as thrown as I was by this well-dressed group trespassing on the beach club that was once our world, this party the most showy debacle since the upstairs banquet hall hosted our junior prom, the one we skipped, a week before we became lifeguards. I smiled and swallowed the sugary remains of the last widow and walked to a clearing in the crowd around the corner from the ladies room with the fat leather couch and the men’s room where we used to practice peeing in urinals, hoping that you’d follow.

The beach club was actually a pool in the middle of a dull town in the middle of a landlocked state. The property was surrounded by a high wooden fence, for exclusivity. You had to belong, and pay, to enter. The tennis courts next to the pool were barely maintained, but they were tennis courts. Lifeguarding here was our only way of belonging, we workers on the high chair, marked by our bright red one-pieces. They let us swim between shifts.

It’s funny to be here, y’know, out of our reds, you hollered over the throb of the band the moment you reached me.

I’m working on getting better at keeping in touch, I said.

I parked on the median, you said.

Under normal circumstances it was off-limits to park on the grassy median, but this was Todd Holiday swim team superstar’s wedding, rules were bent. We glanced at the newlyweds as they hit the dance floor. You glanced longer than I did.

I held up a finger, my clutch was still on my chair. I returned to grab the rest of the gummy spiders from inside, freeing them from their plastic bag and tossing one in my mouth on the way back to you. I offered one to you and you closed your eyes and opened your mouth to receive it.

That summer was so the summer of the sour widow, you mouthful-shouted.

The eight-legged gummies were in every kid’s paw during our three months guarding. We were still kids then so we had fistfuls too, a fix way better than any hard candy. The dumb joke was we don’t eat lifesavers because we carry them in case someone starts drowning. We are the lifesavers. And we lifesavers eat sour widows.

You were still lifeguarding, I knew, at the college aquatics center. My mom kept me posted because it was the place where she swam. She swam laps once a week but because of her wheelchair she needed assistance getting in and out of the pool. The lifeguards were important to her. She told me she was proud that you’d stuck with something. I didn’t tell you any of this as we avoided the spotlight in the nuptial crowd. Instead I made the sound Mmm and thought about our beach club summer, a whole decade ago.

I remembered post-closings when the employees had free reign of the snack bar, our tennis court truth-or-dares. The odd licks. I’m sorry my tongue wasn’t as clean as your eyeball. I remembered you blew your whistle and dove in to pull Mister Wooten to safety after he collapsed off his pink float. I was sleepy and the pink float blocked my view, I thought it was abandoned. He could have died on my watch, but you were there. I remembered you saved me that day too.

Todd Holiday led his bride to the dance floor. You saw him and I saw him and our eyes collectively narrowed at his even inviting us, his charity at reaching out to the old staff, us outsiders. This was our space his guests had invaded. Our house. We’d held all their lives in our once-wet grasp, in the CPR from our lips.

I thought of Todd Holiday behind the wheel at the end of our sour widow summer. He was driving his Miata out of the pool parking lot and I was hyperventilating. I’d finished my shift minutes before and gone to get you for yours and when I shoved the door to the break room open I saw Todd coming down your leg.

I’m sorry, I screamed, but not at you.

I’d already turned and fled so I screamed it at the arcade game in the corner of the snack bar instead, the machine that shocked anyone with soggy fingers. I went to the grassy median, thumbed my whistle and forgot how to breathe. I watched him hop in the convertible and peel out.

When your shift was over you exited the gate and found me slumped against a tree at sunset. You wiped my cheek and we lit a fire and held a séance to contact Princess Di. She had been killed the night before. We asked her spirit if the two of us would stay friends forever.

In the present of the reception you requested a final widow and we both indulged. The sour powder stripped the flesh from our mouths and activated the moment, transformed time and death into faraway stars. A raucous song began and ended while we stood and didn’t dance. I could tell by your talking that you were no longer chewing. I tried to listen but instead I thought about the next thing I wanted to say, what I needed to tell:

I dreamed about you last night. You helped my mom out of the pool. Thanks. But that wasn’t the dream. The dream was something else. That was the reality.

Henry Hoke is the author of The Book of Endless Sleepovers and the story collection Genevieves, which won the Subito Press book prize. His writing appears in Electric Literature, Joyland, The Collagist, Carve and the Catapult anthology Tiny Crimes. He co-created and directs Enter>text: a living literary journal.