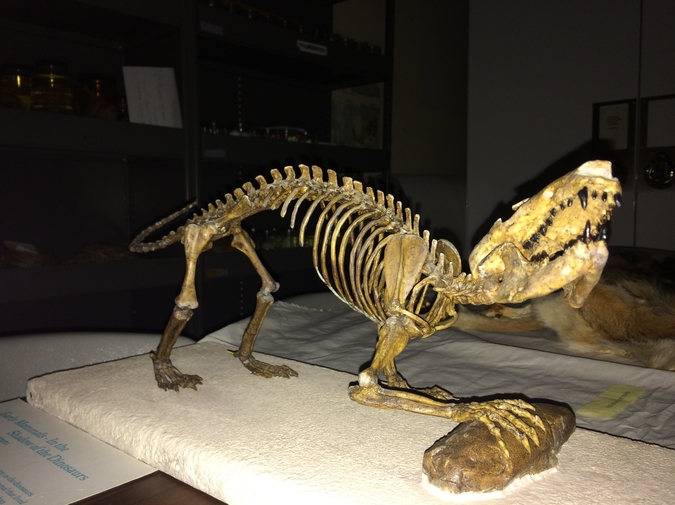 Simone is waiting to pee at a gas station in Mills County, Texas. Her boyfriend Mack is buying cigarettes, Reds. On the wall by the bathroom is a black-and-white photograph of a dead jaguar. Two dapper men in hats, their white shirts spotless, crouch near the body, their rifles crossed. Two hunting dogs are beside them, one severely tuckered out. The last jaguar killed here, the caption says.

The cat was shot snarling, or maybe its jaw was later arranged that way to appear more terrifying. Simone imagines — grace, a blur of rosettes, baying, gunfire. She looks away but can’t get the photo out of her mind, like gazing at the sun, an electric blotch. She researches the picture on her phone. In Texas, jaguars are believed to be extirpated, the government reports, meaning: totally destroyed.

Come here she tells Mack. It’s so horrible. What, he says, not moving from the line. He’s tall, and his white t-shirt stretches across his back like a freshly-laundered sheet. Forget it, she says, going into the bathroom. The toilet seat is stippled yellow. Mack pisses too and she buys a fake cake.

We are extirpating the whole world, Simone says in the car, collapsing cake down her shirt.

Mack lifts a crumb from her boob, places it on his tongue.

They are on a road trip through Mack’s home state, heading back to college in Denver. They’ve seen friends, Barton Springs, bats, but not Mack’s father, who he does not speak about. Driving north through Texas, they pass towns folding in on themselves, fields of sorghum, futuristic turbines.

On a ranch, a hand-painted sign by the highway says: Whoever shot my dog will burn alive.

Why do people revenge dogs but not jaguars, Simone says.

Mack is shaking his head to the Buzzcocks, ancient history.

You never talk to me, she says.

Do you want Wendy’s or Popeyes? He asks.

I’m talking about the death of a species.

They eat fried chicken at a rest stop, hunched over the lattice table, heat and flies, stripped bones piled in cardboard containers. The bright fast food packaging, with its happy promises, makes Simone want to cry. She leaves and does a TikTok dance in the parking lot, no music, sneakers chirping on asphalt, semis rumbling by. The sun is draped in red. Mack is looking at his phone.

It’s from the fires, Mack says, pointing at the sky.

Why didn’t we see your dad?

Mack crosses the lot. He starts dancing too, his face sangfroid, skinny limbs flailing in all directions.

That night, it’s late, Mack is driving past a copse of pecan trees, the window rolled down so he can smoke. Simone is sleeping. A trail of spit glosses from her mouth. He wants to lick it like a salt lick but he doesn’t want to wake her up. A radio station fuzzes in and out. A billionaire is having a party on a Greek island, the radio voice says. It’s not always easy or fun or pleasurable … the crow is sitting on a dead monkey … then everything went silent. Ahead, an animal appears along the road.

Mack brakes. Simone makes a dream sound. Before the animal shadows back into the trees, Mack catches the eyeshine, too intense, wild for a deer or a cow. His heart is pounding from nicotine and Red Bull. He wants to say things to Simone. Like he’s seen that photo in the gas station before and the light-eyed hunter in the back looks like his father when he’s just won a fight. The last jaguar killed here might mean other jaguars alive. And he cares about everything so much he is —

It was probably a dog, he thinks. Some lost dog.

The truth doesn’t change anything, the radio voice says.

Dana Liebelson is an M.F.A. candidate in creative writing at the University of Wyoming and she attended the 2020 Tin House summer workshop. Her short fiction has appeared in Cheap Pop and is forthcoming from Cutbank. Her journalism has appeared in Insider, Elle.com, Mother Jones and HuffPost. She grew up in Bozeman, Montana, and can't wait to move back to Texas.