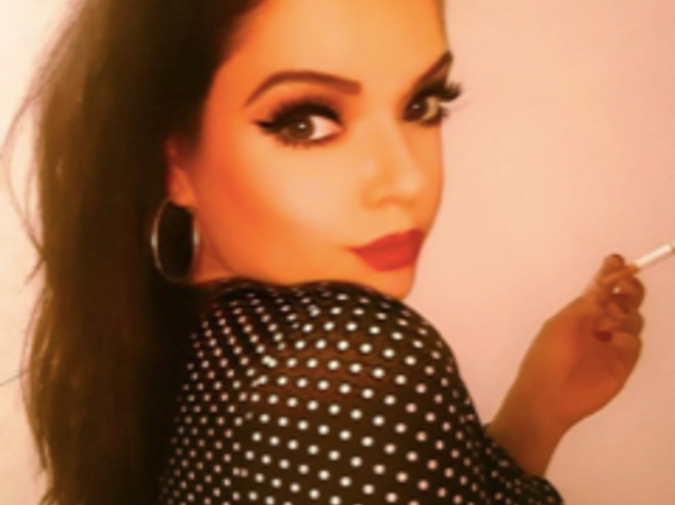 How did we get here? Well, you saw a photograph of me in a magazine and said, “I have to know her.”

We met by chance in a dark room some months later. You said, “I’m so pleased that you look nothing like you do in that picture,” and thus the parameters of our unbounding love were set.

On our third date, we went shopping for funeral outfits.

We bought the suit that you’ll wear at yours with a credit card we’d found in someone’s mail. You stole the dress that I’ll wear at mine. That dress is the most beautiful, perfect possession that I own. It’s hidden in a suitcase under my bed to keep it pristine, but sometimes I take it out just to look at it, to touch it, to make sure it’ll fit. I am so excited to wear it.

I wrote you a note on a cigarette paper and tucked it into the pocket of your suit jacket when you weren’t looking. Either you’ll be buried with it, or you’ll find it when I’m gone. I know you haven’t found it yet because, if you had, things would be so very different, and I wouldn’t have to write shit like this.

We’d always drink a bottle of champagne before bed, sometimes two. I think it reminded us that we weren’t quite dead yet.

I came home one day to find you reading a book that was written about me. It was written by some doctors who have never met me, and it attempted to explain why I am the way I am. It had an ugly cover. By the look on your face, I could tell that it didn’t help you to see me like that spread across the pages, dismembered into chapters, chunks of me, dissected into symptoms, boiled down to alarming statistics, my soul turned into science by strangers.

You’d made notes. Lots and lots of notes. I picked the notes out of your hand and up off the floor and set them on fire. You were impressed and annoyed all at once but mostly you were in love. You told me that you were never going to leave me, even if I told you to, even if I let you. I asked you if the textbook told you to say that. The smoke alarm was shrieking. You picked a piece of burnt paper out of my hair and shook your head. The textbook was never seen again.

Remember when you painted a declaration of love in huge letters across the old sea wall? YOUR NAME <3 MY NAME daubed in white along the granite flood defence.

You said that it would last our lifetime, that everyone who approached the island would see just how much I was adored by you. You vandalised a protected island so that every stranger would know that you loved me, that I was so very loved.

Perhaps if I’d been impressed by this instead of horrified, we might’ve survived.

I should’ve realised that we weren’t going to make it when we were wandering around that big, empty house out in the countryside one sunny afternoon in June. Your eyes, those searing blue blowtorch flames, were watching our future children playing in the garden (a son first, you’d insisted, then a girl). Your own face was childlike that day, so full of excitement and hope. You were babbling, saying things like, “Can you see yourself cooking me dinner in this kitchen?” You were envisioning a future for us, one I couldn’t even imagine, let alone see clearly in front of me.

I was terrified of a tiny version of us growing inside of me; scared of my soon-to-be-assumed role of “wife and mother”, with no time to write, no room to breathe, no space to be; internally screaming at the prospect of relentless mortgage payments; panicking that our babies might inherit my sadness/madness/nose; worrying about hypothetical meals being served on time and accidentally murdering my orchids and forgetting to pick the kids up from school and never quite getting used to the absence of silence. I was frightened that I’d feel stuck in a life that wasn’t truly mine but reasoned that it’d be fine because I’d be stuck to you.

Later, when I explored the top floor alone, I quietly considered which room I could end my life in if I chose to, assessing which fixtures I could potentially hang from and wondering what the freestanding bathtub would look like with red water spilling over its edges. “At least the crimson flood of my blood will complement the nursery, which we are going to paint lemon yellow.”

Last week I walked past your old flat on Brewer Street and remembered all those dawns we spent putting the world to wrongs, sitting side by side on the filthy kitchen floor, lino peeling, drinking Johnnie Walker Black Label out of faded teacups, arguing over who is the best Beatle, discussing the pros and cons of freedom.

The cons of being free have long stayed with me, even though you didn’t. And I think, honestly, we’d both say now, “Thank fuck we fell apart.”

HLR (she/her) is a working-class poet, writer and editor from north London. Her work has been widely published, most recently by Emerge Literary Journal, Idle Ink, Expat Press, and many others. She is the author of History of Present Complaint (Close to the Bone) and Portrait of the Poet as a Hot Mess (Ghost City Press). Twitter: @HLRwriter