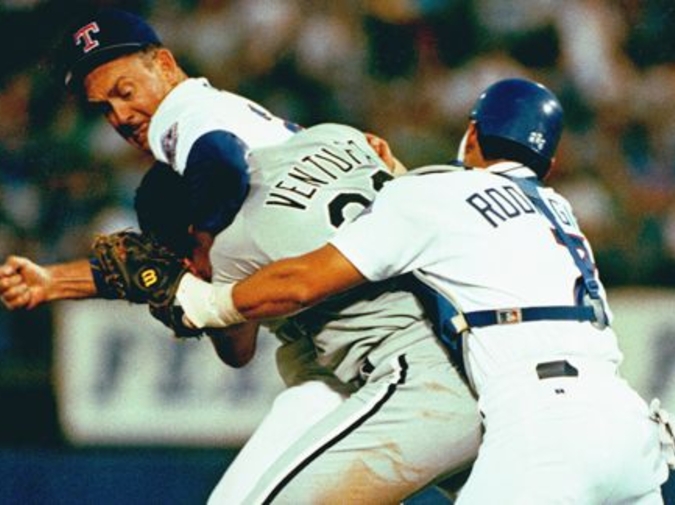 When I think back on it, it’s a couple of seconds, a rush from the plate to the mound, a flash, a gasp, and my grip on my father’s arm.  It was August 4, 1993, and we watched from a high-up section of washed-out-blue seats, lounging the afternoon game when Ventura tossed his bat and helmet and started running.  Dad and I on our feet as fast as Ryan’s punches. Players from both benches spilled onto the field like starlings in flight.

My grandfather was an All-State pitcher in Texas for McKinney High School in the early 1920s. I have a sepia photograph of him in a Pillbox ball cap with an “M” on it. When his team won the state championship his senior year, he had offers from both St. Louis and Detroit. But after graduation, he attended Perkins School of Theology at Southern Methodist University, and until the early 1970s, he served churches in North Texas—Electra, Bowie, Dallas, Gainesville. He liked to say he chose the Lord over baseball.

In 1950, my father went to Stephen F. Austin University in Nacogdoches, Texas on a football scholarship, but during the summers, he played baseball for Martinsville. He said the team had a nice stadium outside of town. Several surrounding towns also had teams, and they’d play three or four games a week. My father center field. Once, a manager and a coach from another team showed up at a game and offered him cash to play for them. My father told them no, he couldn’t do that.

I was in fifth grade when some of the kids at PE started playing baseball in a dirt field. I wandered over to stand in line for my turn to bat, and I went back every day until I got a chance to pitch. When that chance came, I threw the ball to one batter after another until the teacher’s whistle called us away. I kicked at the dirt—marking my mound so I could find it the next day. After a couple of weeks, the other team dragged onto the makeshift field and wouldn’t line up. They complained no one ever got on base.

I found the video of the Ryan/Ventura fight on MLB.com. Nolan Ryan steps back, one, two. Then his knee flicks up as quick as a dancer’s on a count. The clip runs for six minutes and twenty-six seconds—much longer than the rush of my recollection. Ryan staggers out from beneath the heap buttoning his jersey, and Ventura paces in a daze. The announcer’s surprise: “Look at this.” The deep blue seats of the stands challenge the fade of my memory, and it looks like the game is being played at night. But the sun I remember. The suddenness I remember.

My father was a freshmen in high school when my grandfather was preaching in Bowie, a small town ninety miles northwest of Dallas. My father third baseman. One day, my grandfather came to practice and the coach asked him to pitch. “He pitches two innings in his street clothes,” (my Dad likes to tell this one), “no one got a hit off him.”

My grandfather retired shortly after I was born in 1970, so I never got to see him preach, but when I’d visit during the season, he’d have a game on as loud as it would go.  I like to keep a baseball game on in my house.  Just to hear it.

At the age of eighty, my father still announces the high school baseball games at Tillery Field in Mesquite, Texas. He takes his CD player to the press box to play songs between innings. I’ve never been to one of those games, but I’m sure every player on the roster knows “Wipe Out,” “Whole Lotta Shakin’ Goin’ On,” and “Jailhouse Rock.”

Just after college, I almost married a guy who loved sports probably more than he loved me.  One day he showed up at my apartment with two gloves and a ball.  “Here,” he said, coming toward me while I slid the glove over my hand and fingered the ball, “let me show you how to hold it.” Then he stopped and looked at my hand. I did, too, amazed by the way it formed with an instinct I didn’t know I had. The seams beneath my fingers sure. We tossed the ball until we squinted against the dusk to see it. When what I threw thwacked against his glove, I could feel it.

When my father was playing baseball those college summers, some of the fans would pitch in two bucks for each home run he hit. After the game, they’d hand him the collection through the fence. He remembers Murray Shaw, the catcher, and Bobby Flanagan, second base, the way the three of them were offered contracts to play in the Major League Baseball rookie league in Florida.  The way they were told they’d maybe move up. “I was a junior then. I didn’t take their offer,” (he likes to tell this one, too), “I wanted to play football another year. I wanted to finish college and become a coach.” He did.

I don’t remember much about that Rangers and White Sox afternoon except Ventura’s rush to the mound. In October of that same year, the Rangers played their last game in Arlington Stadium. Now they play at Globe Life Park, and my father and I still make a game or two every season. He gets peanuts. We share a Diet Dr. Pepper. I grip his arm when we stand and cheer for home runs. When we wander out to the parking lot, he likes to remind me we’re walking where the old stadium used to be.

Jill Talbot has work forthcoming this fall from Brevity, Carve, Fifth Wednesday, Passages North, and Zone 3.  She'd like to dedicate this essay to her dad, who turned eighty-one yesterday and took her to the Rangers game in Arlington last week to celebrate.