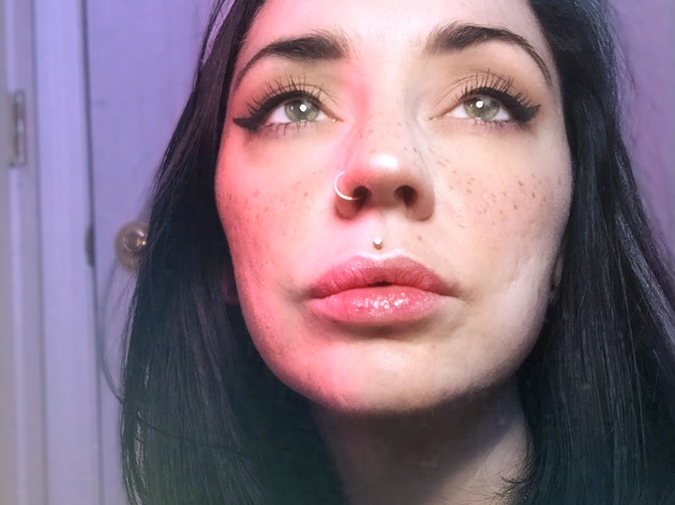 In spring, birds come. Unmown grass fruits seeds. A small indent in the weeds shivers as something moves through it, like someone lost in a corn maze. I approach the bird but like most sick animals it runs from help. I crawl towards it, my shoulder blades pulsing beneath my thin-strapped tank top. Ivan steps out of the house in khakis and a long-sleeved collared shirt with a red name tag. His shiny leather shoe pushes grass apart. Soil bleaches cold into my kneecaps. The bird hops again.

Ivan bends down and picks up the bird, its red breast beating. I look at it, thinking it looks like a feathered heart. But I know a bird is not a heart. A heart does not belong in a pair of hands.

It’s a robin chick, says Ivan. He splays one wing out to show holes where feathers should be, empty tooth sockets.

I think he knows everything about animals like a boy scout or farmer. Ivan grew up on mountainsides, was deployed to resorts and deserts. Places he was meant to die. Now he works security for armored trucks. Ivan lived many different lives before me and I am interested in all of them.

I get off my knees, go into the house. My eyes feel like burnt light bulbs screwed into their sockets, draining energy yet not working. The dog jumps in excitement and his paw scratches my arm. The dog hurts because he loves. He doesn’t know what hurt is when done out of love. I step back outside, stand with the shoebox next to Ivan, waiting. We'd adopted the dog to prove our commitment to each other exactly one year ago, and had made the decision to adopt again, this time my sister's baby. My mother had called, pleading, for me to take the baby. I think of my sister’s life, sitting in cars inhaling black smoke from aluminum foil through pen tubes. My sister’s dry cough, my sister’s body limp in the bathroom doorway, legs kicked out into the hall.

Ivan looks at my arm, the scratch joining dozens of ropey self-inflicted scars. Ivan makes a disapproving sound. He asks if anyone will adopt the dog.

I shake my head no, lying.

Ivan and I lie in bed scrolling through news, the dog at our feet. There is never anything of significance to discuss. The world will go on hurting just the same. I turn to him, admiring how the dim light makes his teeth look like little tombstones. I look at Ivan because I am anticipating. I’ve been taught to do this all my life.

Greg has taken dogs out to the woods before, he says.

Works on finance side, Ivan says. Greg said taking dogs out to the woods is awful. Greg said, you don’t want death on your conscience. But Greg forgets who I am, says Ivan.

I recall the history of Ivan in Uniform, Ivan with Crew Cut. Memory spreads like blood through gauze.

Have you killed dogs before, I ask. I had always assumed Ivan's killed other men. It was easy to think of those deaths as an abstraction. The dog seems so human when his little eyebrows move this way and that.

Tons, says Ivan. None of them made me feel like that.

I imagine the dogs. Stray dogs in the desert; no names or collars. At the edge of our bed, our dog shivers, his collar twinkles. He looks up.

Because women ate the apple, Ivan says sarcastically. I don't laugh at the joke. He looks at his phone for a second, then back at me.

The fruit was offered out of love, I say. It was the workshop of the self.

Ivan sighs. I try to think of some consolation to give about Greg but the scratch on my wrist busies my mind. I put my hand on his shoulder and squeeze. His eyes are grey, muddled by humidity and beer. I give the only consolation I can provide. I lean in to part his lips; I use my tongue.

Ivan presses his fingers into my pinkest parts. I imagine the feel of my insides, his fingers rough. Ivan’s thumb, placed gently on my pulsing little bump, moves one way then another. The soft light changes red to pale on the curves of our skin. Ivan puts one hand on my chin, pushes my lip into my bottom row of teeth with his thumb until the membrane splits. I like to be cut like this. Ivan is pumping. Ivan is a machine and I’m a carcass on a conveyer belt. Metallic spit works its way through my gums. I let his slide take me. For a moment I see myself from above. My face round, chin tucked into my neck. Eyelids loose, the whites look ecclesiastical. Our bodies split, wetness seeping from between us.

Ivan wipes water from his lips, puts his head back.

Ivan doesn’t look. What do you hope to achieve, he says. I wonder, too. Lately everything feels inconsequential. Experiences fall through me like a sieve. I consider accepting custody of my sister’s baby. I consider abandoning the dog. There isn’t any judgment but there isn’t anything else, either.

Ivan and I are quiet while he waits for an answer.

Ivan says his father stared at him every day as a boy. Ivan says, Intimidation.

People project feelings into other people, I say.

I feel split open. Like a hand hammered against pavement, peach skin meshed out red into asphalt grooves. The pulse of blood moves beneath the stretch of his fingers, over my hip.

Ivan goes to the bathroom to get water. The medicine cabinet opens, a plastic lid pops. A pill is crushed against the counter.

It’s discipline, he says. To stare and be stared at.

It’s not about not blinking, I say. My voice goes high and tight. Ivan bends over and sniffs something off the counter. He stands up and moves into the doorway, half in and half out of the light.

What are we doing about the dog, he asks. He sniffs again, shorter, touches his nose with a finger, and comes back to bed. His body loosens, eyes close, his tongue and jaw go slack. I slink from the bed and head into the bathroom, pull half-blades from a yellow box on his side of the bathroom cabinet, thinking about what I want. What I want is natural. What is natural is what I want. The tile is cold against my bony ass. The blade is thin as paper. It separates the skin. The gutter in my leg opens white then slowly fills with blood.

The next day I’m on a highway when the fresh remains of an animal split traffic. The back half of a deer, or maybe a large, tan dog, tall enough to hit a bumper, is spread out over the middle lane. Everything pink inside. I count three legs. I think of my sister. She got hit last summer crossing a country highway at night. What were the odds, I think, when you could see headlights coming. I imagine her body in five pieces among the shoulder gravel.

I turn onto my home street and see specks of blood on the windshield, hit the lever to spritz. The wipers move but the blood stays, a neon red drip. At home, the shoebox on the patio is empty. Across the yard something parts the grass in little thumps and I’m there again, knees wet. The little bird gulps air. One eye closes, the membrane thin and bunching up along the eyelid. I claw at dirt until I find an earthworm.

The bird’s mouth opens and I put the worm in, but it doesn’t take. Then the bird doesn’t open its mouth anymore.

I am tired. I think about cataloguing all the days I feel like dying. But then I think Ivan would find the death catalog. Ivan would use it against me. I have no reason to think he would, but still it occurs to me. I make an enemy of men because I am afraid. I try to correct my thinking, but I also want to close my eyes and lie down like the bird. A large hand presses into my shoulder. I turn around and see Ivan against the cold grey sky, clouds papered above. Ivan leans into me, breathing against my neck.

I could crush it, he says. The heat of his breath gives his words a torpid color.

I shake my head. He puts his fingers in my hair like a comb and pulls them out halfway, then rests his palm on the back of my neck. It feels heavy. I am newly surprised by his strength.

It’s bleeding, I say. I hear my own voice inside more than outside, stumble along the hard sounds in bleeding. I walk around the yard in platform sandals, making wide steps to avoid dew on the grass. My feet get wet anyway. I pick up twigs, blades of grass, another worm, and bring them all to the bird. Flies buzz around landing on its open eye.

When I look up, it’s all clouds.

Just throw it over the fence, he says. I shut my eyes, an outline of Ivan and the bird and the dog and the backyard, hot and beating.

My sister had been hitchhiking with her boyfriend, backpacking through national forests. She was enjoying a wild freedom, the kind I pretended to enjoy when I went into the backyard to sit under trees. Eventually, the bugs would bite, air would cake my make-up. I'd rush back inside, sliding the door, the cool velvet of the couch against my itching legs. I pick up the bird and walk to the back of the yard, a wild alleyway of unmanaged weeds. I think of my sister on the road looking down at her thighs, at the asphalt. Or maybe she looked up, head thick with wish, eyes wide at the red wash of light on her lover’s face. I cradle the bird with both hands and split them open over the fence, watching as it disappears into brush. It falls like a fat apple. I wait to hear the impact.

Elle Nash is the author of the novel Animals Eat Each Other (Dzanc Books) and the forthcoming Nudes (SF/LD, 2021). Her work appears in Hazlitt, Guernica, The Fanzine, New York Tyrant and elsewhere. She teaches an online workshop called Textures. Find her on Twitter @saderotica.