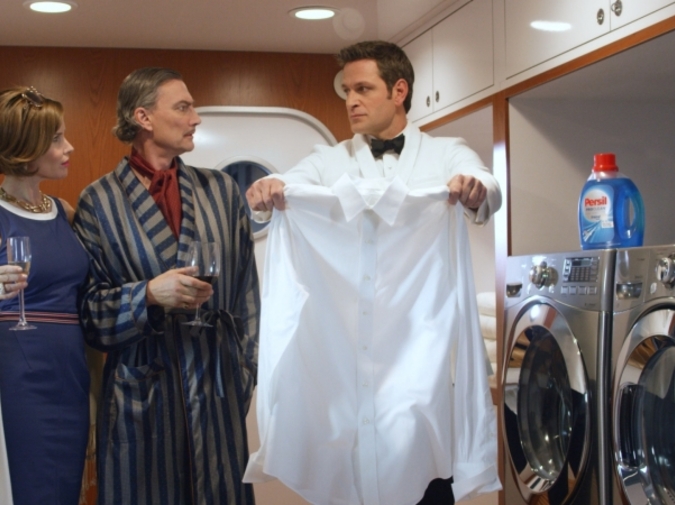 The Professional felt the rush of consciousness, the quick awakening that could only mean another person with questions. Another intransigent stain on a garment. He had come to think of it as a whoosh – there was nothing and then whoosh and then floor under his feet, clothing on his body, air in his lungs, his legs swaying then finding their purchase. He paused a moment before he opened his eyes. Maybe this time it would be an actress or a model, a race car driver or guitarist or a famous chef. Maybe he would be in a penthouse apartment in Saigon. Maybe it would be Mariah Carey.

He looked around. A dirty apartment, newspapers everywhere.  Already he could smell the Pekingese and their ratty hair practically morphing into dreadlocks. Marlene again.  If it was possible, he would have turned around and walked back into wherever he was before the whoosh.

Then he was moving, smiling, shouting in his mock sincere voice. This time Marlene was standing next to the washer with a stained t-shirt. She had a black eye and marks on her neck. She didn’t even say anything, just handed the shirt to him and he smiled and shouted and rubbed some Persil on the stain and scrubbed. It worked, of course. It always did.  Marlene took the shirt, smelled it, and wandered back toward what he assumed was the bedroom. “Sold only at Wal-Mart!” he shouted.

The Professional felt the whoosh and the weight of his body again. Under his shoes, rocks or dirt. He was in front of a house. The air smelled of pine. Snow. He wondered what kind of house Mariah Carey would live in, what she would do with her laundry. He wasn’t an idiot. He knew Mariah Carey was unlikely to buy Persil, available only at Wal-Mart.

He opened his eyes and then he was moving through the door, the smile and raised eyebrows locking in on his face. “Let me tell you about Persil!” he shouted at an elderly woman in a housedress. She was scrubbing at a similarly grubby garment with a hand full of paper towels. God the messes these people got themselves into, the way they lived.

The Professional watched his hands take the dress, heard the words flowing out of his mouth. He needed to think but as usual it was all moving too fast. The natural state of the scene, he thought, is to play itself out, to get to “Sold only at Wal-Mart!”

Is this Hell? he wondered.  It wasn’t unpleasant but there was so little to it, these brief glimpses of consciousness. He realized he had no idea how long it was between scenes. It could have been seconds since the last one, which would mean he was in a loop, the scenes constantly reloading. It could be months, even years, which was a different thing altogether.

He handed the dress back to the old woman. Her hands were still full of dirty paper towels. “Sold only at Wal Mart,” he said.

The Professional felt the whoosh and then carpet under his shoes. He let his body go slack, and the scene started, as always, with him stepping confidently, words coming out of his mouth. He was in a generic laundry room, an apartment complex or a dorm. A woman stood next to a machine with a dress in her hand. She held it out.

The professional felt the whoosh and smelled the dogs immediately. He opened his eyes. Of course: back at Marlene’s. Mariah Carey probably had little dogs, too, he thought, but she would be smart enough to bathe them, or at least hire somebody to do it. He realized in a rush that she would also have somebody to do the laundry.

His mouth was talking and his feet were moving. Marlene stood by the washer, holding a shirt dripping blood onto the floor. She handed it to him and he squirted it with Persil.

“I just…couldn’t take it anymore,” she said.

“A few squirts and we’ll be tighty whitey again!” The Professional said. He scrubbed desperately. The blood was thick and squishy on his hands and the Persil was not getting anything out of the shirt. He was just pushing it around, getting more on his hands while blood dripped into the dirty floor.  One of the dogs waddled over and lapped at the bloody puddle. It coughed then lay down in it, the tendrils of its coat inky and red. The Professional’s hands scrubbed. The stain was just spreading.

“Can you take me with you?” Marlene said. She put a hand on his shirt and left a bloody handprint. “I can’t stay here,” she said.

“A few more…squirts…of Persil…and we’ll be good as new!” The Professional said. He knew that Marlene could not go with him, any more than he could break the scene and follow the trail of blood that led to the back rooms of her house. He squirted more Persil onto the shirt. Maybe if he just acted like it was clean, put it in for a round on heavy and shouted the tagline. Where was it that he went, anyway, in between scenes?

“You can’t, can you?” Marlene said. She touched his arm again. She hadn’t even bothered to wash her hands. He wondered how long ago it had happened. Minutes, maybe.

“Persil!” The Professional said. “Ranked number one among housewives who know!” He held the shirt in both hands, scrubbing it against itself.

The Professional squirted more Persil. He was running out. The bottle was just always in his hands and he had no idea how to get more. The dog sat up again and lapped at the puddle, now foamed with pinkish bubbles. The other dog walked into the room, leaving bloody footprints with each step.

Marlene put a hand on his chest. “Are you real?” she said.

The Professional felt the whoosh and then thick carpeting under his feet. The air smelled like grapefruit and sage. He opened his eyes. Dim lighting, expensive furniture. Through the windows he saw a cityscape, lights twinkling in high rises.

The Professional was walking, talking about Persil, about stains and Pro-Power Technology.

She was standing by a washing machine, staring at a stain on a pillowcase. She held it up and smiled that radiant smile. She made a face, confident but self-deprecating. She was smaller than he would have thought, beautiful, her curly hair tangling down the back of her gown.  Finally.

“Nick will kill me if I can’t get this out,” she said, her voice honey smooth. It really was her. “He’s here more than me and this was a gift from Howard Stern and…” she trailed off. “You must get this all the time, though,” she said.

“Wow, that’s really amazing,” she said. “I need to tell our people to look for that when we’re back in the States.”

The stain was diminishing. The Professional looked around the apartment. Surely something else needed to be cleaned. His own tuxedo was white and spotless as usual. There was a half-glass of wine left on the dinner table. If he could only…

The Professional felt his hands snapping the pillowcase tight. He was laying it down on the washing machine. Oh no, he thought, no no no.

The pillowcase was pure white silk, with the initials “NSC” monogrammed in silver thread. It was stainless. The Professional willed his hands to push it onto to the floor. He tried moving his feet toward the wine glass.

“So that’s called…,” Mariah Carey said. She pointed to the bottle. “Persil! Where can we get that in L.A.?”

The Professional looked around one more time. I love you, he thought. “Sold only at Wal-Mart,” he said.