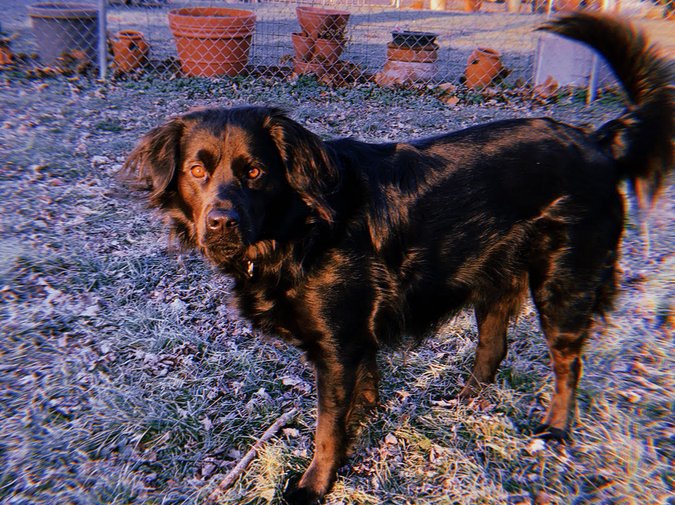 How much sadness is held in each head?

He’s never given me an answer, so I’ve made up
three. Cruelty unclenched rots red
in the teeth. My jaw is closed

to other mouths with answers, clots full

of spoiled berries. If one or more of him
approach, then I’ll show my teeth. Dressed as the death
of a day, my nose bleeding into the snow,

swinging a shovel for anyone who leaves. A kindness

unchecked manges around the eyes,
tunnels tombs to an end. On the day he tilts
toward his sorrow, I’ll hold mine against my teeth.

I turn it over and over until it multiplies. I am the same age
as you when you got married. You tell me the only way out

is forgiveness. I keep this like a vow in a matchbox, something to strike
against. I am made of enamel and metal, same as the 90s house phone

you threw against the wall when your husband ordered you not to curse
in his house. My brother and I hid under the kitchen table, whispering

against hinges and oak. I turned a screw until it popped off
and the shame was like a smashed gallon of milk. Listen, Mom,

I thought I was doing something right because he didn’t yell at me,
instead, he went quiet. In the beginning, he offered me a brass ring.  It greened

every one of my fingers, a color that ripens to rot. Mom, now I can’t trust myself.
Anything I said or lived was forged, each memory interrogated as an imitation

of memory before he went quiet. I turn his name in my mouth,
heavy headstone, jawbreaker. If my only way out is forgiveness, why do all my dreams end

standing in front of a house he locks me out of, my fingers
turning a matchbox, his shadow in the window haloed, multiplying, a miracle

I want to strike against

Alyssa Froehling received her MFA from Ohio State in 2021 and her poems appear or are forthcoming in Black Warrior Review, Puerto Del Sol, The Pinch, and elsewhere. Find her at alyssummaritimum.com.