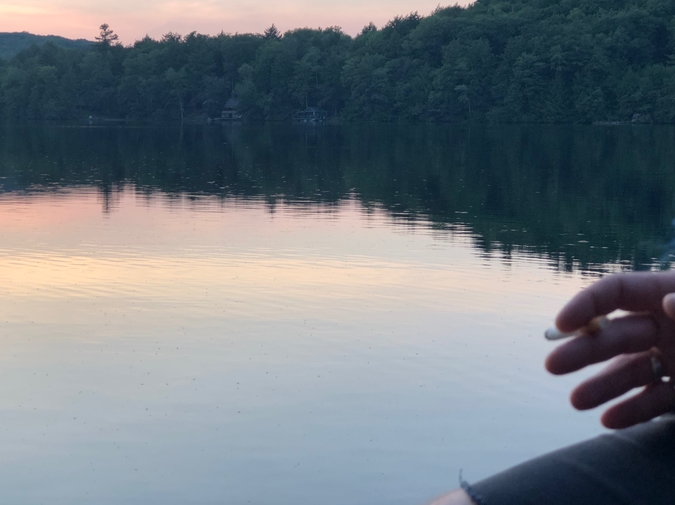 Girls in white dresses.[1] Girls with boys.[2] Girls hanging on the arms of boys and girls who turn to give you a look as they pass by, asserting their position.[3] Girls who know how to flirt with boys.[4] Girls who know how to talk to boys.[5] Girls who wear labels on their clothing and run combs through their hair in class and can smooth their ponytails into the perfect careless half-up flip; girls who have collections of Lip Smackers including the hard-to-find Starfruit.[6] Girls who won’t share.[7] Girls who claim their mom won’t let them allow other girls to sip off their Cokes, and girls who end up allowing just this one really close friend to do it anyway, in front of everyone else.[8] Girls who have Jansport backpacks with their initials monogrammed in the backwards order of first name-LAST NAME-middle name.[9] Girls who have clarinet reed cases and not just the plastic boxes the reeds came in.[10] Girls with yin-yang pins on their backpacks.[11] Girls who don’t tape Beth For Prez stickers on their binders like evidence they can present that they belong; girls who don’t need to belong.[12] Girls who don’t spend class staring at other girls imagining the minutiae of their lives and how, if they could switch places for just one day, they would inhabit the life they were supposed to be living.[13] The older sister sharing her headbands.[14] The mom offering to drive to the Guess store in Raleigh over the weekend to buy a new pair of 24” jeans.[15] The smug satisfaction of arriving at school and being approached by Matt, the boyfriend, the dreamy-eyed local crush, who obsequiously escorts the girl to a place on the wooden bleachers, in full view of the rest of the school, where they sit and talk in such comfortable proximity the other girls don’t even envy her, they just sigh and are glad to see love at thirteen exists.[16] Girls who believe that it is real.[17] Girls who believe that it is obtainable.[18] Girls who know better.[19]

Kristine Langley Mahler is a memoirist experimenting with the truth on the suburban prairie outside Omaha, Nebraska. Her work received the Rafael Torch Award from Crab Orchard Review, was named Notable in Best American Essays 2019, and has been recently published in DIAGRAM, Ninth Letter, The Normal School, Waxwing, and The Rumpus, among others. She is the Nonfiction Editor at Split Lip Press. Find more about her projects at kristinelangleymahler.com or @suburbanprairie.