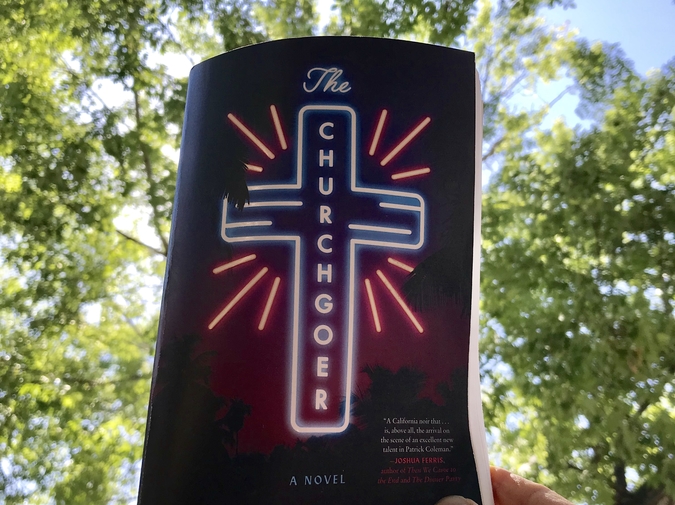 A conversation with Patrick Coleman, loosely around his new book, The Churchgoer (Harper Perennial).

This is a story about humanity. It makes sense in that it proves most things don’t make sense. A former evangelical youth pastor takes up drinking, and then settles into a life of surfing and night-shift security. A man doing horrible things in his basement cares for tons and tons of house plants. A young woman drifts from place to place, necessarily lying her way through each day. Good and bad twist together, always.

It’s also a story about place. How you don’t really know a place until you’ve lived there — and then become part of it — a barnacle. Have you ever even thought of what inland California looks like?

Coleman does the thing all writers want to do — he puts every sliver of collected experience and witness into a story — he crafts life into fiction.

“...eventually I had come to the house drunk and stripped the walls of my old room, tearing down the stapled-up pictures of Shaun Tomson and Tom Curren pulled from surfing magazines, the handwritten Bible verses, the pictures of old friends at camps where we’d all had so much fun, had grown so much in the Lord, had ogled girls, had water-skied. I threw it all away, leaving a bare room of white walls in which there were hundreds of tiny black holes. That was growth: the accumulation of marks, divots, punctures. The bed still had the same green bedspread on it.”

Writing poems, for me, is personal. I always come back to Frost's thing about poetry being a "momentary stay against confusion." Reading a poem or writing one can help me see clearer for a few minutes, maybe a day or two: my own life, the world around me. It's more about staying open, playful, led by the heart instead of fearful, anxious, consumptive, and closed-off impulses.

Novel writing (at least this first time) is similar, but there's just a longer slog to it, and more attention to narrative structure. (My prose poems tend to have a lot of narrative, but still.) It's a bit more oriented around understanding others and social dynamics and social, political, or in this case also religious systems, and seeing them through a kind of quietly deconstructed noir lens.

But even there, I had to constantly find ways to make sitting down to write for that day serve some purpose in my life, for that day. That's part of why The Churchgoer evolved the way it did. The first draft I thought I could just write a fun detective novel, pretty quickly. I take absurd things seriously, and especially in the long revision process it became about exploring the overlaps between Evangelical culture and American culture and ideas of faith and faithlessness—things that were staying some of my own confusion, in a daily way. So maybe that's one similarity.

Where have you lived and what's something you learned that you associate with each place?

Oceanside, CA: Where I learned to love a burrito and that those of us from there still talk about how it's where George Clooney came to film Attack of the Killer Tomatoes.

Irvine, CA: The Back Bay, an estuary in Orange County, has my favorite tree. It hangs over the water and was where I first read Thoreau and felt out a more serious connection to the natural world. Right there in the middle of miles and miles of southern California sprawl.

Balboa Island, CA: Where I first lived, above a Chinese restaurant, with my now wife. Where I learned that there's always money in the banana stand.

Bloomington, IN: I learned too much there, but maybe the most important was that a quieter life might be a better life.

Ramona, CA: In Gerald Murnane's The Plains, he talks about the two kinds of people who live in central Australia. The ones who look to the horizon and imagine endless possibilities, and then those who mark out a small square of earth and think they can never reach the end of exploring the wonders there. Despite my initial resistance, Ramona is where I've been learning option number two.

In August 2009, I was a few months married, living in our little house outside of Bloomington, Indiana, and—I'm hazy about this—but I may have started writing what would become The Churchgoer.

What kind of artist are you drawn to? What's something you can't do that you admire in another artist?

I can't do almost everything! Write poems with line breaks, read sheet music let alone compose it, dance (I really want to learn tap), sing—god, to have one of those naturally good singing voices! I admire all of it, and I'm drawn to all of it. I like the weird and I like the pop, I like bleak and I like hopeful. It feels like the older I get the less I don't like. (There's also a bit of moving away from that young man's mode of trying to understand what it is to be a young man by reading books by young men about young men. It feels good.)

Of everything, I'd probably wish I had some talent as a painter, though. I'm terrible. I mean, I've been doing it a little more lately; I have small kids, and when they paint or draw, I'll do it with them, and it's been nice to see, "Oh, hey, I'm not as completely useless at this as I thought I was!" But it's really not in my wheelhouse. I'm so jealous of people who can render something of visual experience, can create a striking visual object.

CHURCHGOER the film: who are your top-pick actors?

I was just joking around with someone about this. I didn't have anyone in mind when I wrote it, but it seems like you need someone who would have been cast as the wholesome, charming youth pastor-y type in the 1990s, but would now go against that and play a bitter 50-something. I settled on John Corbett (Ian, from My Big Fat Greek Wedding), but maybe one of the Wilson brothers could be good, too. Owen's got that Texan-gone-Californian thing that a lot of West Coast Evangelicals have. But it's hard for me to see.

CHURCHGOER the Flamethrower, though—I can see that right now.

What's something you considered doing with this story that you decided against and why?

Having half of it be from Cindy's point of view. I wrote a lot of that, which was helpful in all kinds of ways. But in a novel that's, in some ways, about the arrogance of straight white men, it felt like an arrogance to presume I could write her story in that way. It felt like the more fitting tension (fitting for the form and genre and subject matter) was in how Haines perceives her story when he first meets her, and then how his version of her story needs to be rewritten, and rewritten. It felt like I need to respect her ability to make choices and live her life mostly off the page, if that makes sense.

Micah Ling is a freelance writer in northern Colorado. She knows Patrick Coleman from their time in the MFA program at Indiana University.