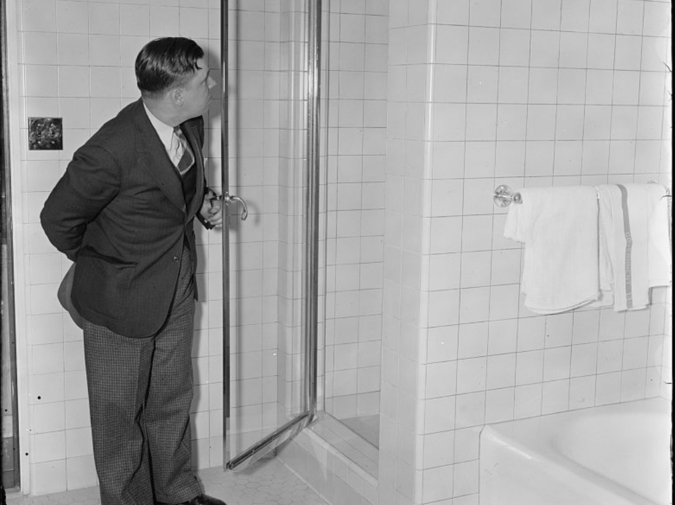 It was Mr. Wexler, my old boss, who made a second me. He was in the garment industry—which is a fancy way of saying he owned a sock factory in a fishy building near the old port—and I was his Jack of some trades, his man of oddish jobs. Most days I spent untangling spider knitters or elbow deep in a busted toe-close seamer. Business was bad—barefoot was back in style—but after so many layoffs and wage cuts we barely had enough hands to complete our few orders. Tempers ran hot, we were holding on by seams, and sometimes I’d have to break up a fight between doltish workers at the pairing station where two socks are joined for life.

I’d never seen Mr. Wexler so vexed. He’d sweat through the aisles in his blue wool suit, cursing mismatches and delayed supplies, pacing shoeless as always. He’d prided himself on making socks so strong you didn’t need shoes, but these days we were shipping thinner and thinner knits to people in the few remaining cold counties up north that still needed warm feet, so his fleshy heel showed through a hole in his sock bottom. I don’t think he noticed.

What he did notice was the splinted mannequin foot used for staging. It was ripping through socks and kicking them across the factory floor as though fed up. Mr. Wexler shuffled over, showed me the problem. “Fix it,” he said, mopping his brow with a spare. But I was still tinkering with the broken blast furnace that gives each sock its soul. “I’m just one man,” I said holding up my two hands. Maybe that’s what gave him the idea.

Most nights I slept in a cart of discards. It was warm there in the basement among the mangled, forgotten wool, although the fishy smell from the port lay heavier down there, sank into your pores. I often dreamed of feet, or maybe the socks did and their dreams leapt into mine, but that night I found myself hanging from a plastic hook in an over-lit department store, bound tightly to something behind my back.

He was there the next morning. The second me.

For a moment I thought Mr. Wexler had finally found more help, and I almost offered a hand to the man sanding the splinted mannequin foot and resetting its spring, until I saw—his hand was mine. His stooped shoulders, his cowlicked hair, his rounded, reddish face—all mine. He didn’t acknowledge me. “Good,” said Mr. Wexler, huffing up from behind and beginning to drag me away, “Good. I need you at the Achilles heeler.” I was too stunned to resist.

We labored in silence, weaving between machines, patching the tattered factory back together throughout the day. He was a walking mirror, a detached shadow. When I studied him at the spools while I pried a jammed gym sock loose, it seemed like he was swimming underwater, moving in slow motion. Or maybe I was. My whole body suddenly strange and foreign. It wasn’t right.

We got twice as much done—Mr. Wexler’s plan, I’m sure—and by the end of the day the line was humming. Orders might actually ship on time. I found the second me near the pairing station, watching pairs of ankle, tube, quarter, crew, mid-calf, and knee-high socks slide off the belt and come to rest in neat stacks. “You,” I called. I touched his back and at the same time felt a light hand tap my back. No one was behind me, and when I turned back around I was startled by his blank stare. His eyes were black. “Who are you? You shouldn’t be here,” I said, blinking. I wanted to run him off, show him for the fake that he was, but he got there first. “You shouldn’t be here,” the second me said. “There is only one me.”

It was a lousy fight. Throwing a punch at yourself is dizzying, so I often missed. He shouldered me into a spider knitter which began spitting yarn. I tossed him towards the toe socks and pulled off a shoe in the process.

I remembered my first day at the factory, years ago, when I was side eyed or ignored by the other workers until one heel helper told me the previous maintenance man, days earlier, had accidentally shot a nail into his heart while fixing a toe hold and calmly drove himself to the hospital when no one else would. I met him briefly not long after when he came to collect his things. He was weathered, deep wrinkled, with two sagging jowls and frizzy white hair that stood on end like he’d received a static shock. “Never forget: anything can be replaced,” he told me, tapping his chest, “even you.”

Maybe that’s why in the thick of things I knocked the second me into the newly-functioning blast furnace. I’d seen the inexorable machinery of the assembly line, felt a newer design coming up from behind, and wanted to throw a wrench in the works to stop the whole thing from moving forward. He let out a short scream, put up a brief struggle for freedom, then went still. I watched as the second me was consumed by heat and fire, lips and limbs identical to my own going up in flames. In that moment, I later wondered, did he receive a soul or was it extinguished? Did we share one soul and I’d torn it in two? I turned away.

That was when I finally noticed: we weren’t the only pair. The two doltish workers that had tried to restrain us? Identical. The dead-eyed crowd of onlookers? A sea of doubles. Twins. Two Mr. Wexlers stood before the furnace in the same stupid suit, sucking their teeth. “We were on track,” said one. “We’ll miss another shipment now,” said the other. They drew lines on the floor with their pointed, thin-socked toes. “People. They get two socks with every purchase and they still want more.”

Though no one said the word fired, I was sent away soon after on a delivery truck headed north. I’d worked there more than a decade, wasted my prime using bad parts to patch shoddy machines and had nothing to show for it but gnarled fingers and a satchel of discards. It was a life lived inside out, all shown seams and ugly backwards patterns.

All these years and miles laterI still don’t know how Mr. Wexler did it or whether it was all just another basement dream. I live in the mountains now far from any port. I wear thick winter boots, eat mushy peas, and look for new work in the so-called garment industry. Perhaps a man is needed for gloves. How to go on when your life often seems balled up and wasted and forgotten beneath some bed? At night in the bone-cold dark I sometimes catch the scent of fish, dream of a fresh wool pair, and hope impossibly that someday I’ll feel the light tap on my shoulder that’d mean I'm not alone.

Matt Weinkam is Executive Director of Literary Cleveland and a founding editor of Threadcount. His work has appeared in Denver Quarterly, New South, Sonora Review, Split Lip, Quarter After Eight, and DIAGRAM.