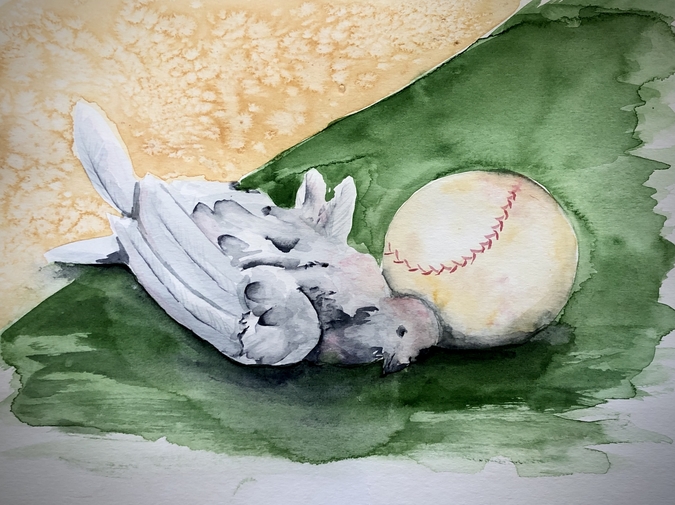 On the 20th Anniversary of Randy Johnson Hitting A Dove Mid-Air with A Fastball During Spring Training in Tucson, Arizona

There must be something there
about peace and the odds of it all:
a dove, a morning, Randy Johnson’s
famous gangly sidearm, a piece of
art in and of itself, clocking in at
102 mph, his long feathered blonde
hair unruly underneath a diamondback
cap, his spindly bird legs kicking
back into his long limbed pre-pitch
ritual, the mound an inverted nest,
a leather animal of a baseball in flight,
slipping through time suspended,
here a singularity before and after intertwine:
feathers dust, blood, cork, shock, a strike, a foul ball.

Randy Johnson was reportedly distraught.
An animal lover, an environmentalist,
for years he wouldn’t joke about it despite
interviews, despite sportscasters, despite
fan favorite moments, despite autographs,
despite ESPN talking heads he still doesn’t
find it funny.

In Backyard Baseball’s 2001 edition Randy Johnson has 10/10
baseballs on his pitching card and a peach colored animated
face, no mustache. His long limbs, cartoonish even in real
life, look real enough bending in ungainly angles on the screen.
His stats list him as bats right, throws left, the most feared
pitcher in the league with a blistering fastball and a wicked
left hook. He can play the outfield, but he’s best on the mound.
He likes to play the drums and listen to the Canadian band
RUSH. I remember the load time on the old family computer,
the tinny simulated baseball sounds, my brother and I liking
Randy’s power but not his endurance. When his pitches went
wild, wow, they really went wild.

In my little league games we wore big league uniforms and my Diamondbacks jersey was too big. I didn’t know it was a nickname for rattlesnakes, I had never been to Arizona. That year I learned the signs for things: to steal a base, hold off the swing, lay down your bat for a sacrifice bunt, lefthanded, how my Dad taught me assuming I could become a switch hitter, which I didn’t, just a right-handed third baseman and a mediocre left-handed batter, an odd bird on a team named after a sand burrowed snake.

If you type Randy Johnson’s name into Google’s search bar it autocompletes, “randy johnson bird.” Not his nickname, The Big Unit, not his astonishing height, 6’ 10, just a video titled “Randy Johnson Kills Dove” playing on repeat dozens of copies of the same grainy video, each with millions of views, each with the same dull yet astonishing thunk.

Placeless and timeless, but probably sometime BC — Multiples cultures and points in history point to the simultaneous development of play, usually involving a ball of pig’s bladder, a rock wrapped in leather, or a human head.

Toronto, August 4, 1983—  Dave Winfield, an outfielder for the New York Yankees playing in a game against the Toronto Blue Jays, throws a warm up ball in the middle of the fifth inning, striking and killing a seagull. After the game, the Toronto police take him into custody and charge him with cruelty to animals.

Tucson, March 24, 2001— Randy Johnson’s fated pitch collides with dove mid-flight, sending the feathers into the far stands and quite possibly the stratosphere. One statistician puts the odds at on in 50 million, another puts it higher.

At the seventh inning stretch the mourning
dove sings take me out to the ball
game for the last time.

At the bottom of the ninth, Randy
Johnson takes a bow, no feather
in his cap, this moment a cocktail
anecdote for every bleachered fan
watching a sun scorched Tucson
morning. Johnson, all domestic fame
and gangly sandhill crane, dips his knees
and looks up to a bluebird sky, flecks
of gore still decorate the grass before
the mound, the ghost of it splatted on
the laces of Randy Johnson’s left cleat.

Matthew Medendorp is a poet, essayist, the current Creative Director at Thin Air Magazine, and an MFA candidate at Northern Arizona University. He spends his spare time washing boats in a warehouse without heating or cooling. You can read more of his work in HAD, Complete Sentence Lit, and at mattmedendorp.com